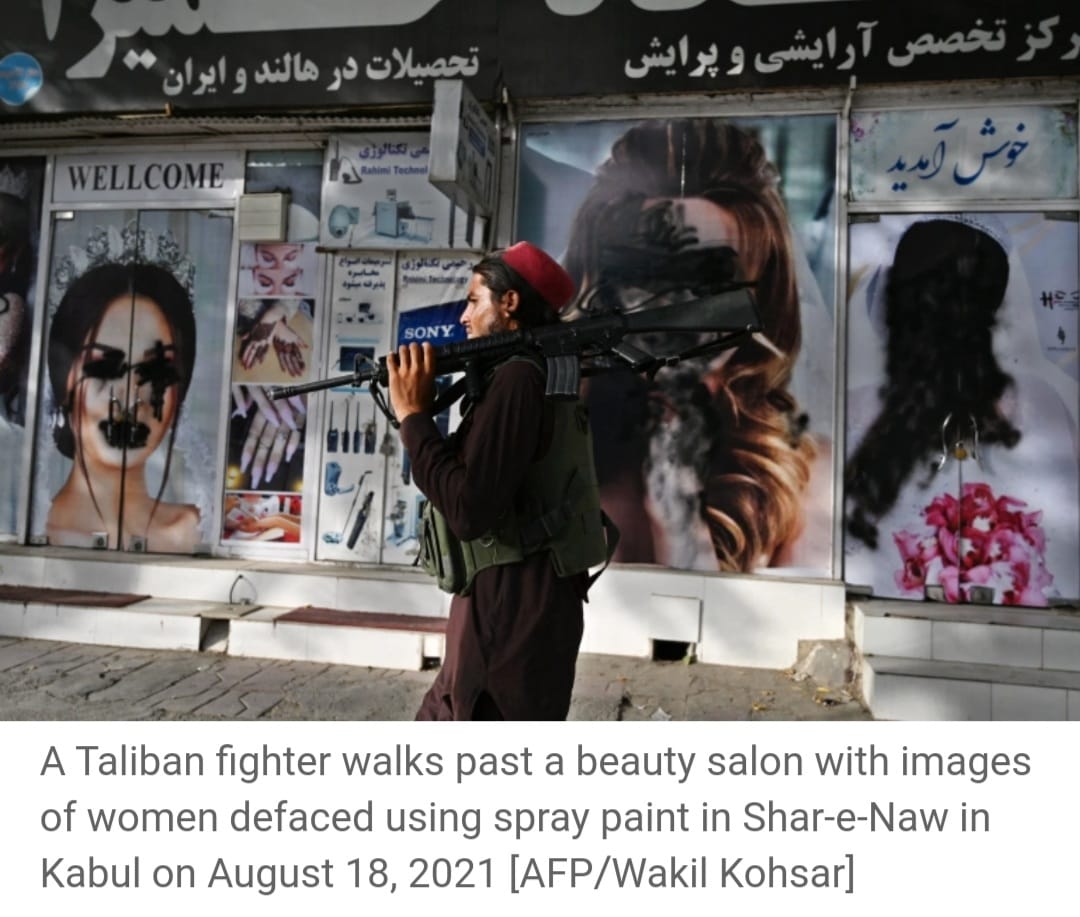 And what does the current debate on the Taliban and women’s rights tell us about Western (mis)perceptions of Muslims?

According to Human Rights Watch, the Lord’s Resistance Army (LRA), a Ugandan rebel group whose stated goal was to create a state based on the biblical 10 commandments, kidnapped and killed tens of thousands of people in the 1990s and 2000s.

Their practice of abducting boys to train them as soldiers and girls to force them into sexual slavery has been documented and put before the International Criminal Court in The Hague, resulting in an arrest warrant for Joseph Kony, the group’s founder, along with four of his senior leaders, for war crimes and crimes against humanity.

Although according to its leadership, the armed group was a Christian army acting in God’s way, few op-eds have had to be penned arguing that the LRA’s actions are not in congruence with normative Christianity. It is just (rightly) assumed.

Unfortunately, a completely different set of rules is applied when it comes to Muslims. The commentary surrounding the most recent Taliban takeover of Afghanistan is but one example.

Reports have emerged that Afghan women are being forced to marry Taliban fighters, quit their jobs and schooling, as well as endure public flogging.

Rather than call for expanding asylum programs or even exerting political pressure on the Taliban to reform, right-wing politicians in Europe and the United States have instead weaponized the ongoing instability in this war-torn country to score political points against their Muslim citizens and immigration proponents.

As Muslim citizens of Western nations, we have yet again found ourselves defending our community and faith against those wishing to exploit this tragedy to propagate Islamophobic tropes – the same tropes that were used to justify invading Afghanistan two decades ago.

We are now, as we were then, expected to clarify, condemn and distinguish our faith from the actions of a militant group claiming to act in its name, an unfair and exhausting demand not made of our Christian compatriots, regarding any armed group or war criminal claiming to act in Christ’s name.

Still, despite the double standard, we must take these moments as opportunities to educate. So let me be clear: The normative teachings of Islam are antithetical to the Taliban’s reported treatment of women.

The teachings of Islam, in all their diversity, encourage a woman’s spiritual aspirations absent an intercessor between her and God and define her identity as first and foremost a servant of The Divine, whose rights constitute a sacred covenant. In seventh-century Arabia, Islam’s advance took a woman from being treated as property to a fully independent agent who had control over her financial decisions and possessions and who had the right to choose to marry and divorce.

What about women’s employment? From the first generation of believers, women served as everything, from medical workers to warriors. For example, Rufaida Al-Islamia was a surgeon recognized by the Prophet for her care for the wounded, her training of other women as nurses, and her role in establishing the first field hospital for the community. Nusaybah bint Ka’ab was known as the “Prophet’s shield” for defending him in battle, even when many men fled.

Islam’s teachings also emphasize the importance of seeking knowledge, for both men and women. In fact, the first known university in the world, the University of al-Qarawiyyin in the Moroccan city of Fez, was founded more than 1,000 years ago by Fatima al-Fihri, a Muslim woman. It is the oldest existing and continually operating educational institution in the world.

Fatima and her sister, Mariam, were highly educated and devoted to their faith. Upon her father’s death and her inheritance of his fortune (yes, Muslim women could inherit property centuries before their European counterparts), she and her sister decided to use their wealth to build an institution of higher learning.

The al-Fihri sisters’ dedication to the pursuit of knowledge is far from an isolated example. Four years ago, while on a speaking tour of the United Kingdom, I had the distinct pleasure of meeting Professor Mohammad Akram Nadwi, who authored an encyclopedia of the Muhaddithat, the female scholars of Hadith, Islam’s collection of prophetic narrations.

He told me he had set out to write a short book about what he thought would be a handful of female Hadith scholars, and ended up completing 57 volumes (which he had to condense to 40 for publication) on about 9,000 of them. He continues his research and says there are thousands of more women he could write about. I learned from him that many of the scholars we consider the pillars of our tradition had female teachers (not just students).

It is also worth noting that Dr. Nadwi set out to study just scholars of Hadith. Many of these women also were scholars of fiqh (law), tafsir (scriptural exegesis), and other sciences along with Hadith. I remember wondering what the number would be had he set out to study Islam’s female scholars in general.

And yet these realities stand in sharp contrast to the image of Muslim women in the popular imagination, and imagination easily persuaded that the Taliban represents Islamic devotion, not deviance, in its treatment of women. According to the Institute for Social Policy and Understanding’s Islamophobia Index, the stereotype of Muslim misogyny is the most pervasive anti-Muslim trope tested among Americans.

Western political figures have long instrumentalized the image of the oppressed Muslim woman in need of Western saviors to justify European, and then later American invasion and exploitation of Muslim lands. While this tendency can be traced back to the Crusades, in the modern context, it takes the form of biased media coverage of Muslim women.

According to a Stanford study conducted by Dr. Rochelle Terman, who based her analysis on data collected from 35 years of New York Times and Washington Post reporting, US news coverage of women abroad is driven by confirmation bias. Journalists are more likely to report on women living in Muslim and Middle Eastern countries if their rights are violated but report on women in other societies when their rights are respected.

Some may argue that this is simply a reflection of reality. Women in Muslim majority countries, they contend, are violated more often. But this is not the case. Terman writes, “Even if the nations rank more or less equally on the women’s rights index, women in Muslim countries are shown suffering misogyny, while women in Western countries are portrayed in more complex ways.”

Even when their lived realities are similar, Muslim women are depicted as more mistreated than their counterparts of other faiths, reproducing the false notion that misogyny is exceptionally and inherently Muslim.

We must become critical consumers of information, questioning double standards and challenging bias, and not allow anyone to use the actions of a militant group to propagate bigotry. This is the only way we will truly stand with the Afghan people, women, and men, who must lead an effort to support them.