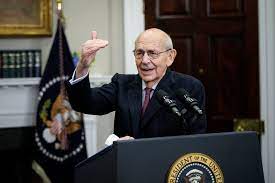 America- Justice Stephen Breyer will soon retire from the Supreme Court – but who will replace him? President Biden and his top advisers have spent a year preparing for this moment: the chance to make good on his pledge to name the first Black woman to the Supreme Court at a time of continuing racial reckoning for the U.S.

His promise also underscores how much Black women have struggled to become part of a very small pool of elite judges in the nation’s higher courts. Speculation on Wednesday focused on a rarefied group of well-credentialed Black women who have top-tier educations and experience on the bench.

The shortlist included Ketanji Brown Jackson, a 51-year-old judge on the U.S. Court of Appeals for the District of Columbia Circuit who graduated from Harvard Law School and clerked for Justice Breyer, and Leondra Kruger, a 45-year-old justice on the California Supreme Court who graduated from Yale Law School and clerked for former Justice John Paul Stevens.

J. Michelle Childs, 55, a little-known Federal District Court judge in South Carolina whom Biden recently nominated for an appeals court, is also seen as a potential contender. One of Biden’s top congressional allies, Representative James Clyburn of South Carolina, told Biden during the presidential campaign that he believed she should be appointed, in part because she came from a blue-collar background, another underrepresented group among federal judges.