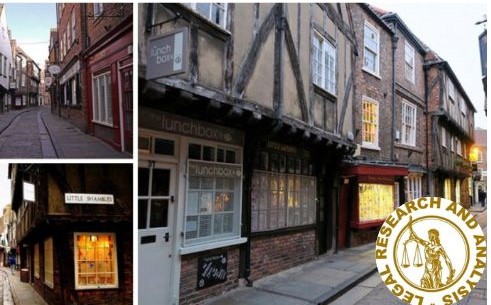 A time machine is not required to soak up the atmosphere of a medieval street in England. Travel to the city of York and walk up the street known as “Europe’s best preserved” or, simply,

The Shambles. It’s no wonder that this cobbled-street gem in the heart of York has been given such a title, as it is the keeper of a 900-year-old tradition that today is cherished by tourists who admire such authenticity.

The street’s long existence has been confirmed by its first mention in the Domesday Book of 1086, a manuscript ordered by William the Conqueror.

Besides being the name of the popular York street, the word “shambles” is a term describing a multitude of narrow, curvy streets and alleys that form a maze. It also was used to describe a street of butchers and meat selling, in general.

The word origin is primarily rooted in the Anglo-Saxon word “shamel,” which can be literally translated as a stall for selling meat. In time, this term evolved into “flesshamels”: shelves for the flesh, which were the main element in almost any butcher’s shop.

This onomastic analysis zooms in on the dominant objective of The Shambles, that is, hosting the main meat market in the area of York, where the butchers made a weekly display of their goods. The street included a number of butcher’s shops and houses, which included slaughterhouses at the back of the premises.

This apparently neat infrastructure provided a constant supply of fresh meat for the customers who reportedly chose their cuts from the front part of the houses.

The meat was either hung up in front of the shops or laid out for sale at the window sills. Today, tourists can still see a few of the original butcher’s hooks that are hung on the fronts of the shops or below the windows.

The Shambles had around 30 butcher shops by the beginning of the 19th  century, so understandably, the immense quantity of offal and blood had to be disposed of somewhere.

The city of York lacked a modern system of sanitation at the time; at least twice a week the waste of the slaughtered animals had to be sent down a channel created to the side of the pavements.

A stroll through The Shambles is a great opportunity to examine its architecture, which dates back to the mid-14th century. It’s almost inevitable to have the impression that the roofs of the timber-framed buildings bump into each other as if trying to touch their opposite neighbor while leaning to the middle of the street.

The extreme narrowness of some sections of The Shambles enables visitors to touch houses on opposite sides with arms outstretched.  The picturesque, appealing composition of the closely positioned buildings radiates a welcome, although, in the past, this architecture had a rather practical purpose, once again related to meat.

Reportedly, the position of the buildings shadowed the walls below, thus preserving the meat from being directly exposed to sunlight and heat.

Among the many charming buildings, there is one that is distinguished by its significance: the home of  Saint Margaret Clitherow, known as the Pearl of York. Margaret was arrested for hiding Catholic priests and clergy vestments in her home. Centuries later, she was canonized, and in the 1970s her home was turned into a shrine.

Nowadays, the butcher’s shops of The Shambles are replaced with charming cafes, boutiques, restaurants, and souvenir shops. The small shops are placed on the first floors of the buildings, with the upper floors overhanging.