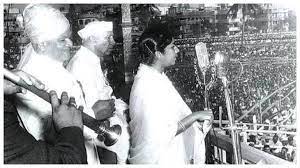 Jawaharlal Nehru had famously titled Lata Mangeshkar, the nightingale of India, but the one title she most wanted and which eluded her was Princess of Dungarpur, a princely state in Rajasthan. Her relationship with Raj Singh Dungarpur, the famous cricketer, and manager of the Indian cricket team, was a well-known fact.

Princess Rajyashree of Bikaner, who is Dungarpur’s sister’s daughter, writes in her autobiography, Palace of Clouds: A Memoir, (Bloomsburry India 2018,) that the two met through Dungarpur’s friendship with Hridaynath Mangeshkar, the cricket-mad brother of Lata. The relationship was frowned upon by the Dungarpur royals and the other royal families that they had married into.

Raj Singh Dungarpur was the third son of the Maharaja of Dungarpur. His three sisters had all married into royal families and it was expected that Raj Singh would do the same. According to Rajyashree, her mother Sushila, who was married to Dr. Karni Singh, the last Maharaja of Bikaner and Lok Sabha Independent MP, and Sushila’s sister the Maharani of Danta, a princely state in Gujarat, were very much opposed to the match. Rajyashree writes: “Lata Mangeshkar was invited to the old Bikaner House in Bombay and I strongly suspect (but cannot confirm) that she was asked to leave their brother alone so that he might make a suitable match.”

The two were very much in love and such was their devotion to each other that both remained single and remained devoted to each other right until his death in 2009. Rajyashree refutes the rumor that they had a secret marriage but does write that her uncle had a lot of support from his young nieces and nephews, despite the royals’ stance. Rajyashree herself used to meet Lata and the extended Mangeshkar clan regularly when living in London and refers to her as an extremely humble, down-to-earth, affectionate, and thoughtful person. It was said that in private, Raj Singh used to address her as ‘mithoo’. They had also helped each other in various charitable missions.

On January 27, 1963, as part of the Republic Day celebrations in Delhi, singer Lata Mangeshkar had performed in front of an audience that comprised President S Radhakrishnan, Prime Minister Jawaharlal Nehru, Indira Gandhi, and many distinguished guests. Opening with the bhajan Allah Tero Naam on Dilip Kumar’s request, she had followed it up with Ae Mere Watan Ke Logon. Later, the singer reportedly confessed to journalist Subhash K Jha, “I was much relieved to get it over with. After I finished my two songs, I went backstage to relax with a cup of coffee, unaware [of] what an enduring impact the song had created. Suddenly, I heard Mehboob Khan Saab calling for me. He caught hold of my hand and said, ‘Chalo, Panditji ne bulaya hai [Come on, Panditji has sent for you]’. I wondered why he wanted to see me. When I went out, everyone, including Panditji, his daughter Indiraji, Radhakrishnanji stood up courteously to greet me. Mehboob Khan Saab said, ‘Yeh rahi humari Lata. Aapko kaisa laga uska gaana [This is our Lata. How did you like her performance]?’ Panditji said, ‘Bahut achcha. Mere aankhon mein paani aa gaya [Wonderful! She moved me to tears]’.”

The singer was subsequently invited by Nehru for tea at Teen Murti Bhavan, the Prime Minister’s residence in New Delhi at the time. Recalling the occasion, Lata said, “While the rest of the entourage spoke eagerly with Panditji, I stood in a dark corner, hesitant to make my presence felt. Suddenly, I heard Panditji say, ‘Lata kahaan hai [Where is Lata]?’ I kept standing where I was. Then Mrs. Indira Gandhi came and took my hands saying, ‘I want you to meet two of your little fans.’ She introduced me to little Rajiv and Sanjay Gandhi. They did namaste and ran away. Then Panditji again asked for me. Mehboob Khan Saab came and took me to Panditji. Panditji asked, ‘Are you going to go back to Mumbai and sing Ae mere watan ke logon?’ I replied, ‘No, it was meant to be a one-off thing.’ He wanted a picture with me. We posed for a keepsake and then I quietly left. I had to rush back because it was my sister Meena’s wedding in Kolhapur. When I returned to Mumbai the next day with my friend Nalini, I had no idea that the song had already become a rage. When we reached Mumbai, the city and the media were buzzing with the impact that the song had made in Delhi, how Panditji broke down, etc, etc.”

This was not the only time when Lata Mangeshkar had closely identified herself with the nation, especially when war clouds were on. During the Indo-China War, she, along with Sunil and Nargis Dutt, had toured war-torn zones to entertain jawans during the 1962 Indo-China conflict. The idea came to them when the Dutts had presented Prime Minister Nehru with a cheque of Rs 1 lakh for the National Defence Fund, prompting the then Prime Minister to mention the many jawans who were living in harsh conditions, far from home, with no radios. Sunil Dutt proposed trips to the area to boost the soldiers’ morale and Nehru happily agreed to the idea. Dutt also requested fellow artists, like Lata Mangeshkar, Kishore Kumar, and Waheeda Rahman, to do the same.