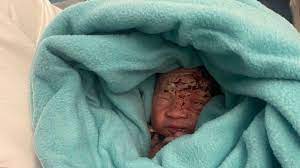 An employee at Mauritius Airport found a newborn boy in a garbage toilet in an airplane toilet. A 20-year-old Madagascar woman suspected of giving birth during a flight was arrested.

An Air Mauritius plane from Madagascar landed at Seal Saywood Saarlam Gouram International Airport on January 1. 4,444 airport officials made the discovery while searching for an aircraft for regular customs inspections. They took the baby to a public hospital for treatment.

The woman suspected of being the mother of a child initially denied that the boy belonged to her and underwent a medical examination to confirm that she had just given birth.

She was placed under police surveillance at the hospital.

You and your baby must both be fine.

Madagascar, who entered Mauritius with his two-year work permit, was cross-examined after discharge and charged with abandoning his newborn baby.