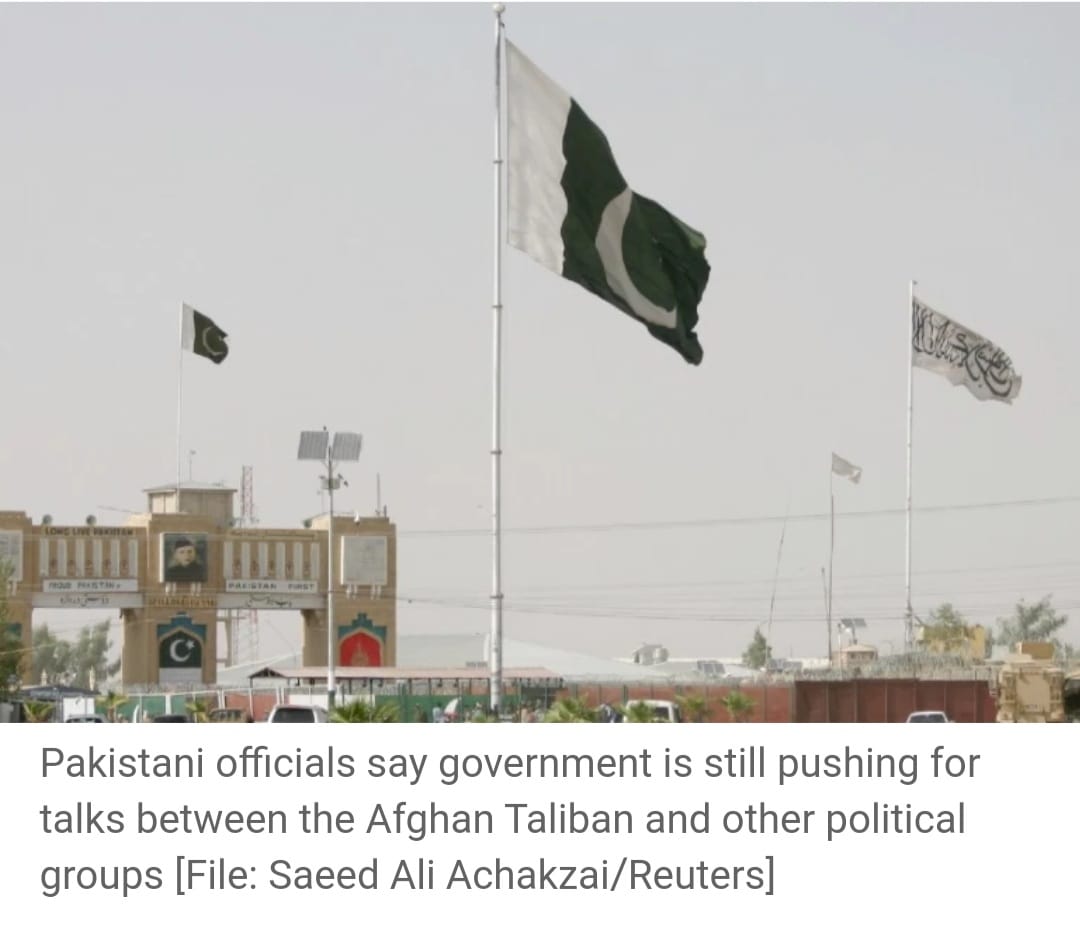 Some see the Taliban takeover as Islamabad’s preferred outcome, but it may embolden armed groups in the country.

Pakistan’s government, long accused of providing overt logistical and other support to the Afghan Taliban, will walk a fine line between optimism at having a more friendly government in Kabul and potential security blowback on its own soil, analysts say.

Pakistani officials, however, told Al Jazeera the country has no favourites in Afghanistan, and continues to back “a negotiated political settlement” that would see “an inclusive government” formed in its northwestern neighbour.

“Pakistan’s preferred outcome, we have been very clear, is an inclusive negotiated political settlement in Afghanistan. One that includes representation of all ethnic groups,” said Hassan Akbar, a senior national security official.

The Afghan Taliban, which swept across the country in a lightning summer offensive, took control of the capital, Kabul, on August 15, and continues the process of forming its own government. The armed group waged a bloody armed rebellion against the United States and Afghan forces for almost two decades, leaving thousands of civilians and security forces dead.

The group, which follows its own strict interpretation of Islamic law, was accused of carrying out atrocities against ethnic minorities and imposing curbs on women’s rights during its last stint in power (1996-2001).

“We have been very clear that without a negotiated political settlement and an inclusive government, long term peace and stability will not be able to come to Afghanistan,” said Akbar.

While the US and European governments appear to be focused on evacuations, Pakistani officials say Pakistan is still pushing for talks between the Afghan Taliban and other political groups to form a governing structure that protects fundamental rights for all citizens.

“From Pakistan’s perspective, we had always argued that the best time to negotiate the political settlement was from a position of strength, when the US had far more troops, but unfortunately this decision was not taken at that time, enough pressure was not put on the [Afghan] government, and we lost that opportunity,” said Akbar.

‘Taliban is the favourite’

Analysts, however, suggest the Pakistani government will be far more satisfied with the outcome of the conflict in Afghanistan than officials let on.

“There may be a pretence, but no person can believe that [Pakistan’s security establishment] doesn’t have a favourite,” said Zahid Hussain, a senior journalist and author of No Win War: The Paradox of US-Pakistan Relations in Afghanistan’s Shadow.

“Security establishment” is a blanket term used in Pakistan to describe the country’s powerful military and intelligence services, which dominate foreign and security policy, and increasingly some aspects of governance, and have directly ruled the country for roughly half of its 74-year history since independence.

“The Taliban is the favourite and they are there.”

Hussain said while Pakistani officials “are not overtly happy, they are actually feeling very satisfied”.

The main reason for this, he said, is the perception of an Afghan Taliban government being friendlier to Pakistani interests than the previous US-backed governments of Afghan Presidents Hamid Karzai and Ashraf Ghani.

“It’s not that [Pakistani leaders] are not alarmed or concerned about the fallout effect, but the real thing is that they see the change in Afghanistan will have provided them a better situation across the border, and particularly in the context of India,” said Hussain.

Michael Kugelman, deputy director at the US-based Wilson Center think-tank, agreed while Pakistan’s security establishment will be aware of security risks, there will also be a keenness to engage.

“Let’s be clear: Pakistan is keen to engage with the Taliban. Recognizing the Taliban government would facilitate Islamabad’s ability to deepen its footprint in a country where India has long had a major presence,” he said.

The main issue between the two countries, both analysts agreed, will be the Tehreek-e-Taliban (TTP) or Pakistani Taliban.

Formed in 2007, the TTP is an umbrella group of armed groups formed across Pakistan’s northwest that espoused a philosophy similar to the Afghan Taliban’s regarding imposing a strict interpretation of Islamic law and has fought Pakistani forces for more than a decade.

The TTP has claimed some of the largest scale bombings in Pakistan’s history, including massive suicide attacks targeting civilians, minority communities, political leaders, and security forces that have killed more than 80,000 people since 2007, according to government figures.

Since 2014, after Pakistan’s military launched a wide-scale offensive against the TTP in its erstwhile headquarters of North and South Waziristan districts, along the border with Afghanistan, the group has been based in eastern Afghanistan, Pakistani security officials say.

Violence has dropped drastically, but the group continues to carry out sporadic large-scale attacks targeting civilians in Pakistani cities. In recent months, the TTP has also stepped up targeted attacks against Pakistani security forces and civilians in its former strongholds of North and South Waziristan.

Earlier this month, Pakistan’s government blamed an attack on a bus carrying Chinese and Pakistani workers that killed 13 people on the TTP, alleging the attack had been facilitated by Indian and Afghan intelligence services. Those governments denied the charge.

“There is an inherent concern that with the Afghan Taliban taking over it will also have a fallout effect on this side of the border, particularly on Pakistan’s fight against militancy,” said Hussain.

“It is no longer the 1990s – Pakistan has fought a war against its militants, the TTP, and they have managed to clear those areas, but the control of some of those areas is tentative.”

Pakistan will press the Afghan Taliban to take action against the TTP, but the issue is “complicated”, Hussain said.

“I think the Afghan Taliban will not take military action against them or throw them out, but what they have seemed to have promised is that they will not be taking action from across the border into Pakistan.”

Earlier this week, Pakistani Interior Minister Sheikh Rasheed Ahmad said the Afghan Taliban had provided that reassurance, despite a video released by the TTP showing the return home of senior TTP commander Faqir Muhammad after his release from an Afghan prison by Afghan Taliban fighters.

Akbar, the national security official, said Pakistan’s interest in a stable Afghanistan is linked to its concerns regarding the TTP.

“Pakistan has been a victim of the conflict in Afghanistan… We have fought with blood and treasure and the gains we have made we want to protect them at all costs. This is a major area of concern,” he said.

In February 2020, a significant component of the peace deal signed between the United States and the Afghan Taliban, which saw the US withdraw all troops from the country, was a Taliban commitment not to allow the country’s soil to be used by transnational armed groups to attack others.

“Islamabad will press the Taliban to curb the TTP in Afghanistan. But this will be easier said than done,” said Kugelman. “The Taliban has longstanding ties to the TTP, which include ideological bonds and operational cooperation in Afghanistan.”

Pakistan’s other main concerns regarding stability in Afghanistan center around a possible refugee crisis and the country’s long-term view of economic growth through geographic connectivity, Akbar said.

“First, we are not in a position to take in more [Afghan] refugees,” he said. “Second, Pakistan wants to preserve the gains we have made against terrorism in the last decade. And lastly, we want to pursue a policy of regional connectivity and that requires that Afghanistan be a stable and peaceful country.”

Akbar said Pakistan’s current push on Afghanistan with all stakeholders was to ensure they form an inclusive government, respect the fundamental rights of Afghans, and honor commitments made to the international community regarding transnational armed groups.

In the US, however, Pakistan’s position on the current talks has been a hard sell for some.

In a Washington Post op-ed this week, former George W Bush and Trump administration official John Bolton called for the US to “come down hard on Islamabad” for its policies vis-a-vis the Taliban.

In Foreign Policy, US academic Christine Fair also called for action against Pakistan, saying the country “is the major force behind the Taliban”.

Akbar, the Pakistani official, rejected the criticism, saying it was based on “old tropes”.

“To say that Pakistan is responsible is ridiculous. Pakistan did not ask [Afghan forces] to surrender and lay down arms or for the Kabul government to pack their bags and leave,” he said.

“How can the collapse of a 300,000-strong army in nine days be put on Pakistan’s door? This is scapegoating Pakistan for the failures of others in these 20 years in Afghanistan.”

Moving forward, analysts agreed Pakistan’s main concerns will be on getting assurances from the Afghan Taliban regarding closing space to the TTP to operate, although there are concerns about the leverage Pakistan has with the group.

“Pakistan enjoyed leverage over the Taliban because of the sanctuaries provided to the group’s leaders as well as medical facilities for wounded Taliban fighters. But now that the Taliban controls all of Afghanistan and is no longer fighting a war, it doesn’t need this Pakistani support anymore.”

Pakistani officials also continue to repeat a longstanding fear since the start of the US war in Afghanistan: of a repeat of the 1980s and ‘90s, when the US and other allies abandoned the region after successfully arming Afghans against the Soviet Union in Afghanistan, an uprising that ultimately created the Afghan Taliban.

“Pakistan is worried about a very important thing: the world must not abandon Afghanistan and Afghans. This is a mistake that was made in the 1980s, and we have seen the consequences of this,” said Akbar.