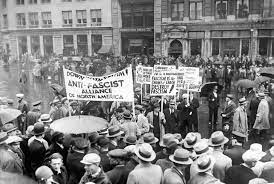 Once upon a time in America, we were all anti-fascists or ANTIFA And all were loving being Anti-fascist. But since the former President would leave no such distinction between what fascism was in The Third Reich’s reign, and what it looked like during the full four years of the Trump Administration. Simply Trump would ruin all whats was very carefully carved by the very founding Fathers of such a great nation, ideal leader, and Global Champion of Holding the democratic values and protection of human rights, since the Last Two Centuries.

The former would Shake the very US Empire’s potential to keep up leading the world in the way it was since at least as the mighty superpower immediately the fall of Moscow back in the 1990s. Antifa was An American pride, All of the United States was proud of leading Antifa, a deliberate effort of all of the “allied power”, but not just US marines, and people of the United States to stop the mass persecution or rather Genocide of jews, Gyps’s and other ethnic groups in Himmler and Hitler led Nazi Empires. So, Concluding the relentless and unmatched efforts of the United States in the Second World War was nothing but history’s one of the biggest and most coordinated assaults on easter and western European fronts as well as in the Pacific, The very assault came to be known as Antifa, or typically whoever in all the recorded more than 15 thousand places where WWII was fought or participated or aided allies advance into the Fascists Nazi Germany. Can be formulated as part of Antifa, so Antifa was something that helps lead the united states immediately after WWII. In the last 75 years, the US was never as unreliable potentially unfit to keep leading the global scenario, The Tables are already turned in favor of China, The new potential Super Power of this century, in the last four years during the tenure of former President Trump if we analyze the foreign policies of the former, we will easily find American abilities are severely impacted by the irrational and unilateral withdrawal from the Key US foreign policies, which furnished the advantage to their Chinese and Russian counterparts. President Biden is just trying to bridge the gap. We also can see Biden as the old guy who would just die for American nationalism. To keep American Empires intact throughout the globe… But the much damage is already caused and had certainly impacted US empires.

May 1st demonstration with anti-fascist flag raised in New York on May 1st, 1929. Gamma-Keystone via Getty Images.

Eluard Luchell McDaniels traveled the Atlantic Ocean in 1937 to fight fascists in the Spanish Civil War and became known as “El Fantastico” for his grenade skills. As a platoon sergeant for the International Brigades’ Mackenzie Pappinault battalion, a 25-year-old African-American from Mississippi commanded a white army and led him into battle with General Franco’s army. It may seem strange for blacks to go this far to get the chance to fight far from home in the white war-was there enough racism to fight in the United States? -But McDaniels was convinced that anti-fascism and anti-racism were the same things. “It turns out that the Spanish invaders are the same people I fought for a lifetime,” said historian Peter Carroll McDaniels. “I’ve seen lynching and famine, and I know my people’s enemies.”

Only McDaniels considered anti-fascism and anti-racism to be inextricably linked. I wasn’t a person. Today’s anti-fascists are heirs to the struggle against racism for almost a century. In particular, his claim to physical direct action to prevent violent oppression is much better understood in the context of the fight against violent discrimination and persecution, which began almost a century ago. ..

The Anatomy of Fascism by Historian Robert Paxton-On the subject of one of the authoritative works-“Rights of the elected group to rule others without being restricted by the law of any kind of human being or God” Set a passion for fascist motivation, including. Often defined by race or ethnicity compared to other humans. Anti-fascists are always against it.

Anti-fascism began were Italian fascism began. Arditi del Popolo-“People’s Boldness” -was founded in 1921 and is named after the Italian assault force of World War I. It was sponsored by Benito Mussolini, who will soon become an Italian fascist dictator. Arditi del Popolo bridged were union members, anarchists, socialists, communists, Republicans, and former Army officers saw wall

By traditional political groups. These bridges quickly spread to races persecuted by fascists.

After Mussolini came to power, he embarked on an “Italianization” policy. This corresponds to the cultural genocide of Slovenes and Croats living in the northeastern part of the country. Mussolini banned their language, closed their schools, and even forced them to change their names to make them sound more Italian. As a result,  Slovenes and Croats were forced to organize outside the state to protect themselves from Italianization and formed an alliance with anti-fascist forces in 1927. The state responded by forming secret police, an organization for anti-fascist vigilance and suppression (OVRA), monitoring Italian citizens, searching for the opposition, killing, and even spying on suspicious anti-fascists. In a Catholic church and blackmailed. Anti-fascists fought OVRA for 18 years, and until 1945, an anti-fascist party under the pseudonym Coronero shot Valerio  Mussolini and his mistress with a submachine gun.

Similar mechanics emerged when fascism spread to prewar Europe. The

Red Front Fighter League (RFB) left-wing used the famous fist greeting for the first time as a symbol of the fight against intolerance. In 1932, when they became anti-fascist behavior or “Antifa” for short, they were Nazi anti-Semitic and homosexual under the flags of the red and black logos currently being waved by the Antifa group. I fought against hatred. The fist was first raised by German workers but was raised by the Black Panther Party, the black American sprinter Tommie Smith and John Carlos at the 1968 Olympics, and Nelson Mandela.

In Spain, anti-fascist tactics and solidarity were tested when a military coup tested solidarity between working-class and middle-class groups organized as a  popular front against fascism in 1936. Anti-fascists stood strong and set an example of the strength of those who unite against oppression. In the early days of the Spanish Civil War, Republican militias were organized like the modern Antifa group. They voted for important decisions, had women serve with men, and stood side by side with political opponents against common enemies.

Black Americans like McDaniels, still excluded from equal treatment in the underground military, served as officers in brigades of Americans who came to Spain to fight the fascists. There were no black fighter pilots in the United States in 1936, but three black pilots – James Peck, Patrick Roosevelt, and Paul Williams – volunteered to fight the fascists in the Spanish skies. At home, racial segregation had prevented them from achieving their dogfight goals, but in Spain, they found equality among the anti-fascists. Canute Frankson, an African American volunteer who worked as the chief mechanic at the International Garage in Albacete, where he worked, summed up his reasons for fighting in a letter home: We are no longer an isolated minority desperately fighting a giant, because, my dear, we have come together and have become an active part. A great progressive force, on whose shoulders lies the responsibility of saving human civilization from the planned destruction of a small group of degenerates who are insane in their lust for power because if we smash fascism here we will become our people in America and in others save parts of the world from the cruel persecution, total imprisonment and slaughter that the Jewish people have suffered and suffer from Hitler’s Fascist heels.Anti-fascist march in Spain On March 30, 1933, students demonstrate against National Socialism and Fascism in Madrid. KeystoneFrance / Getty Images Anti-Fascist Parade in the US 15,000 New Yorkers marched in a torchlight parade down 8th Avenue, crowned by hours of public speaking in Madison Square. Garden. The Parade was a protest against American participation in the Berlin Olympics. Bettmann / Getty Images In the UK, anti-fascists became a major movement as anti-Semitism emerged as an outgoing force. In October 1936, Oswald founded Mosley and the British Union of Fascists attempted to march through London’s Jewish quarters. Mosley’s 3,000 fascists and the 6,000 police officers who accompanied them outnumbered the anti-fascist Londoners who decided to arrest them. Estimates of the amount range from 20,000 to 100,000. Local children were recruited to roll their marbles under the hooves of police horses, while Irish dockers, Eastern European Jews, and left-wing workers stood side by side to block protesters’ protests. Like the  German anti-fascists, and they sang “No pasaran” (“You will not pass!”, the slogan of the Spanish militia) and sang in Italian, German and Polish. They succeeded: the fascists did not get through and Cable Street became the symbol of the power of a broad anti-fascist alliance to end fascist hate speech on the streets. During World War II, antifascism entered its second phase when it moved from the streets to stand alongside those in power. Churchill and other imperialists opposed fascism despite defending colonialism, which starved the Indians to aid their war effort. An alliance was formed between committed anti-fascists and temporary anti-Nazis. It has become something of a social media meme that those who fought in WWII were anti-fascists, but this is a tension at the core of anti-fascist beliefs. The military who had defeated the Nazis together with the separate Allies were banned the black troops in the second class roles and could not serve together with the white troops in the same unit.Later, it appeared in Germany in the 1980s, and in turn, the anti-fascists intensified hatred and racism in the form of Nazi heads that had begun to infiltrate the punk scene.