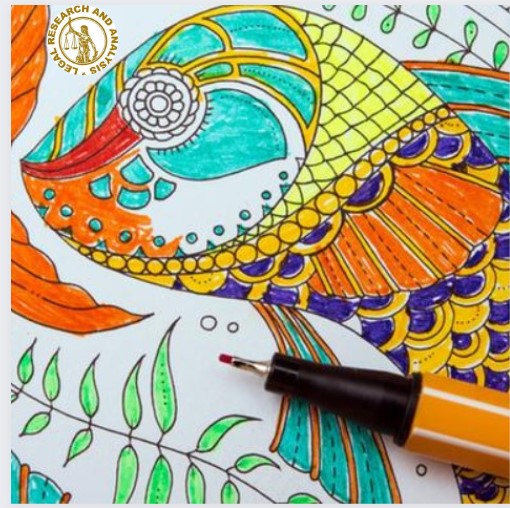 There’s a delightful shop in my neighborhood that sells gifts and textiles from Nepal.

The woman who runs it is so charming that I once bought an unflattering dress just to show my appreciation for the complimentary cup of herbal tea she offered me. Peppered on the walls of her store are dozens of lotus flowers.

They are printed on plain cards, which are given to customers on the condition that they color them in at home and bring them back.

I accepted one of these cards alongside an early purchase of a candle stick, safe in the knowledge that I would never actually complete the task. What adult has time for coloring anyway, I asked myself as I scrolled through Britney Spears’ Instagram feed. But it was a nice thought, and I used the card as a bookmark.

The lotus flower must have stuck with me subconsciously though because one day I found myself buying coloring pencils. I used them very occasionally to highlight important items on my to-do lists. The feel of their pointy nibs cracking ever so slightly on the scrap paper brought back indistinct memories of being a child. But I still didn’t color the lotus flower.

In his final column for The Guardian in September 2020, the author Oliver Burkeman urged readers to lean into the practices that in his own words “strike you as intolerably cheesy or self-indulgent.”

The examples he cited included gratitude journals, mindfulness meditation, and seeing a therapist. The more they make you cringe, the more worthwhile they might be, he argued.

For me, adult coloring books are a veritable source of cringe. I roll my eyes as I pass the mindfulness section of a bookshop, advancing smugly to the counter with the latest Elizabeth Strout instead of some remedial artbook for adults. And yet, as I pass the stand, the image of a nice cup of tea and some coloring pencils pops into my head. I quash the thought immediately.

The reason for my contempt naturally lies in my refusal to acknowledge the vast chasm between who I am and who I want to be. Ideally, I would be a person with an attention span long enough not to need a coloring book to refocus my mind. Deep down, I know this to be untrue.

The shame that accompanies our inability to focus reminds us that attention is a commodity with moral as well as monetary value. This distinguishes it from other resources which tend to have logistical, geographical, or political explanations for scarcity.

The late Nobel laureate economist Herbert Simon is credited with coining the term “attention economy .” The key to understanding the term, he believed was the acknowledgment of the inverse relationship between information and attention. The more of the former we have, the less of the latter we employ.

This has implications in all kinds of domains. Populist politicians have always relied on people’s reluctance to spend too much cognitive energy analyzing the credibility of a punchy sound bite.

This is especially poignant in an age where much of the world resists the opportunity to consult the abundance of credible sources of information at their fingertips.

The phenomenon is equally unnerving in the media. News stories that don’t immediately hook the attention are relegated in favor of those that provide an immediate dopamine kick. Algorithms reinforce the trend and at some point we all find ourselves scrolling through Britney Spears’ Instagram feed.

Except of course for the mindful among us. You can identify them relatively easily by their penchant for buying newspapers, shunning social media, and pausing before they speak.

These rare diamonds of the attention economy offer a glimpse of what life could be if only we could focus. Populist politicians would be eliminated at the ballot boxes. Science would triumph. Our climate would have some chance of being saved.

Half-baked thoughts of this kind surfaced recently when I discovered the lotus flower card inside a book I had not finished reading. If not now, when, I wondered. If not me, who?

I took out my coloring pencils, turned my phone to flight mode, and began. It was harder than I remembered to stay inside the lines. And don’t get me started on the intricate details of the petals. But those challenges notwithstanding, for 10 glorious minutes I was calm.

In the meantime, the energy crisis intensified, the Sterling continued its rollercoaster ride and central bankers talked some more about interest rate rises. I didn’t emerge enlightened on any of these issues but I did feel more equipped to tackle a longer read than I would have if I had been watching Britney Spears dancing on the beach. Baby steps.

I returned to the Nepalese shop and made a point of admiring the colored-in lotus flowers on the wall. Before, possibly because of my attention deficit, it had not occurred to me to wonder why so many customers answered the call to color their cards. Perhaps my neighborhood was far more populated with mindful people than I had imagined.

“You get 15 % off your next purchase if you bring it back,” the owner told me, she raised eyebrows implying this was knowledge I should already have. The smug feeling you get as you return the card is complimentary.