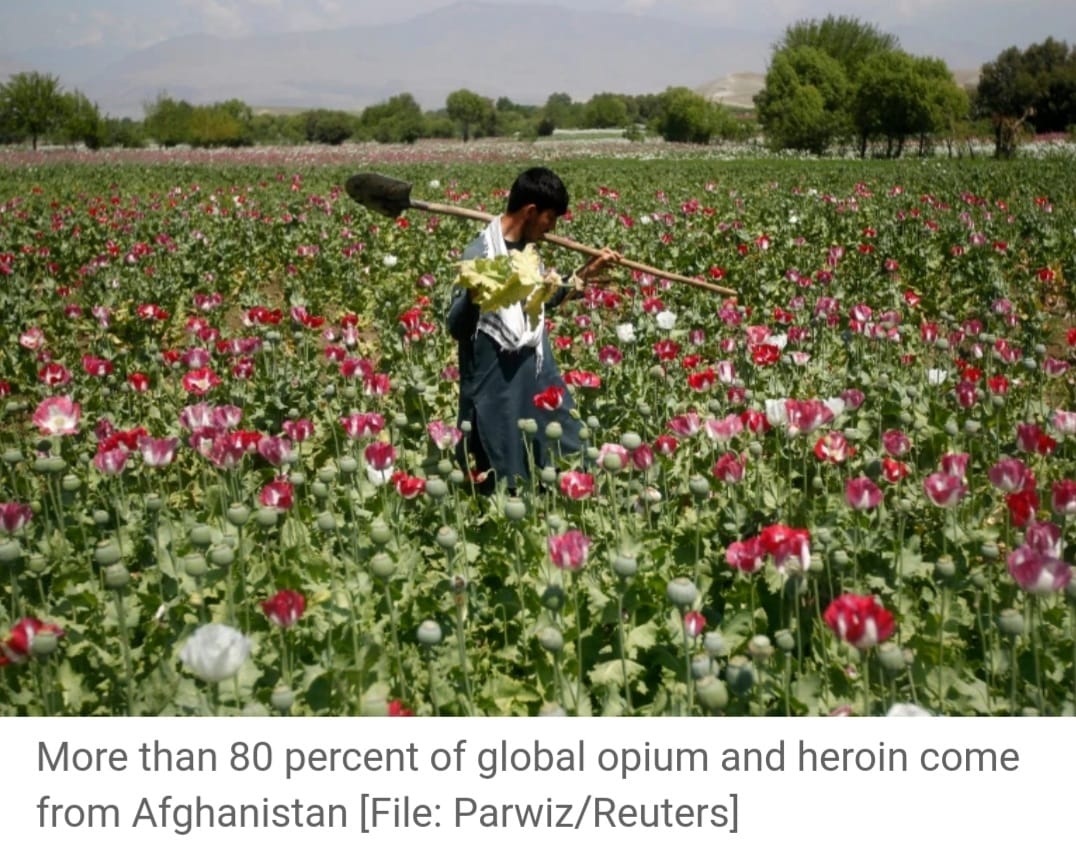 Taliban are involved in all facets, from poppy planting, opium extraction, trafficking to charging smugglers export-fees.

The United States spent more than $8bn over 15 years on efforts to deprive the Taliban of their profits from Afghanistan’s opium and heroin trade, from poppy eradication to air attacks and raids on suspected labs.

As the US wraps up its longest war, Afghanistan remains the world’s biggest illicit opiate supplier and looks certain to remain so as the Taliban is on the brink of taking power in Kabul, said current and former US and UN officials and experts.

Widespread destruction during the war, millions uprooted from their homes, foreign aid cuts, and losses of local spending by departed US-led foreign troops are fuelling an economic and humanitarian crisis that is likely to leave many destitute Afghans dependent on the narcotics trade for survival.

That dependence threatens to bring more instability as the Taliban, other armed groups, ethnic militia leaders, and corrupt public officials vie for drug profits and power.

Some UN and US officials worry Afghanistan’s slide into chaos is creating conditions for even higher illicit opiate production, a potential boon to the Taliban.

“The Taliban have counted on the Afghan opium trade as one of their main sources of income,” Cesar Gudes, the head of the Kabul office of the UN Office on Drugs and Crime (UNODC), told Reuters. “More production brings drugs with a cheaper and more attractive price, and therefore a wider accessibility.”

With the Taliban entering Kabul on Sunday, “these are the best moments in which these illicit groups tend to position themselves” to expand their business, Gudes said.

The Taliban banned poppy growing in 2000 as they sought international legitimacy, but faced a popular backlash and later mostly changed their stance, according to experts.

Despite the threats posed by Afghanistan’s illicit drug business, experts noted, the US and other nations rarely mention in public the need to address the trade – estimated by the UNODC at more than 80 percent of global opium and heroin supplies.

“We’ve stood by on the sidelines and, unfortunately, allowed the Taliban to become probably the largest funded non-designated terrorist organization on the globe,” said a US official with knowledge of Afghanistan’s drug trade.

“The US and international partners have continued to pull out and not addressed poppy cultivation,” the official said on condition of anonymity. “What you’re going to find is that it has exploded.”

Asked for comment, a State Department official said the US would continue to support the Afghan people, “including our ongoing counternarcotics efforts”, but declined to say how aid would continue should US assistance stop if the Taliban seize power.

Afghan farmers weigh myriad factors in deciding how much poppy to plant. These range from annual precipitation and the price of wheat, the main alternative crop to poppy, to world opium and heroin prices.

Yet even during droughts and wheat shortages, when wheat prices rocket, Afghan farmers have grown poppy and extracted opium gum that is refined into morphine and heroin. In recent years, many have installed Chinese-made solar panels to power deep water wells.

Three of the last four years have seen some of Afghanistan’s highest levels of opium production, according to the UNODC. Even as the COVID-19 pandemic raged, poppy cultivation soared 37 percent last year, it reported in May.

Illicit narcotics are “the country’s largest industry except for war,” said Barnett Rubin, a former US Department of State adviser on Afghanistan.

The estimated all-time high for opium production was set in 2017 at 9,900 tonnes worth some $1.4bn in sales by farmers or roughly 7 percent of Afghanistan’s GDP, the UNODC reported.

When the value of drugs for export and local consumption is taken into account, along with imported precursor chemicals, the UNODC estimated the country’s overall illicit opiate economy that year at as much as $6.6bn.

The Taliban and public officials have long been involved in the narcotics trade, experts said, although some dispute the extent of the Taliban’s role and profits.

The UN and Washington contend that the Taliban are involved in all facets, from poppy planting, opium extraction, and trafficking to exacting “taxes” from cultivators and drug labs to charging smugglers fees for shipments bound for Africa, Europe, Canada, Russia, the Middle East, and other parts of Asia.

Some of those shipments are hurled across the heavily patrolled border to traffickers in Iran with rudimentary catapults, reported David Mansfield, a leading researcher into Afghanistan’s illicit drug trade.

UN officials reported that the Taliban likely earned more than $400m between 2018 and 2019 from the drug trade. A May 2021 US Special Inspector General for Afghanistan (SIGAR) report quoted a US official as estimating they derive up to 60 percent of their annual revenue from illicit narcotics.

Some experts dispute that data.

Mansfield says his field studies show the most the Taliban can earn from illicit opiates is about $40m annually, predominantly from levies on opium production, heroin labs, and drug shipments.

Washington spent an estimated $8.6bn between 2002 and 2017 to throttle Afghanistan’s drug trade in order to deny the Taliban funds, according to a 2018 SIGAR report. Apart from poppy eradication, the US and allies backed interdiction raids and alternative crop programs, air raids on suspected heroin labs, and other measures.

Those efforts “didn’t really have much success”, retired US Army General Joseph Votel, who headed US Central Command from 2016 to 2019, told Reuters.

Instead, experts say, they stoked anger against the government in Kabul and its foreign backers – and sympathy for the Taliban – among farmers and laborers who depend on opium production to feed their families.

The Taliban learned that lesson from their ban on poppy growing in 2000, said Brookings Institution scholar Vanda Felbab-Brown.

Despite a steep decline in production, the ban ignited “a huge political storm against the Taliban and it was one reason why there were such dramatic defections after the US invasion,” she said.

Therefore, experts said, it is unlikely the Taliban will prohibit poppy cultivation should they gain power.

“A future government,” said Mansfield, “will need to tread carefully to avoid alienating its rural constituency and provoking resistance and violent rebellion.”