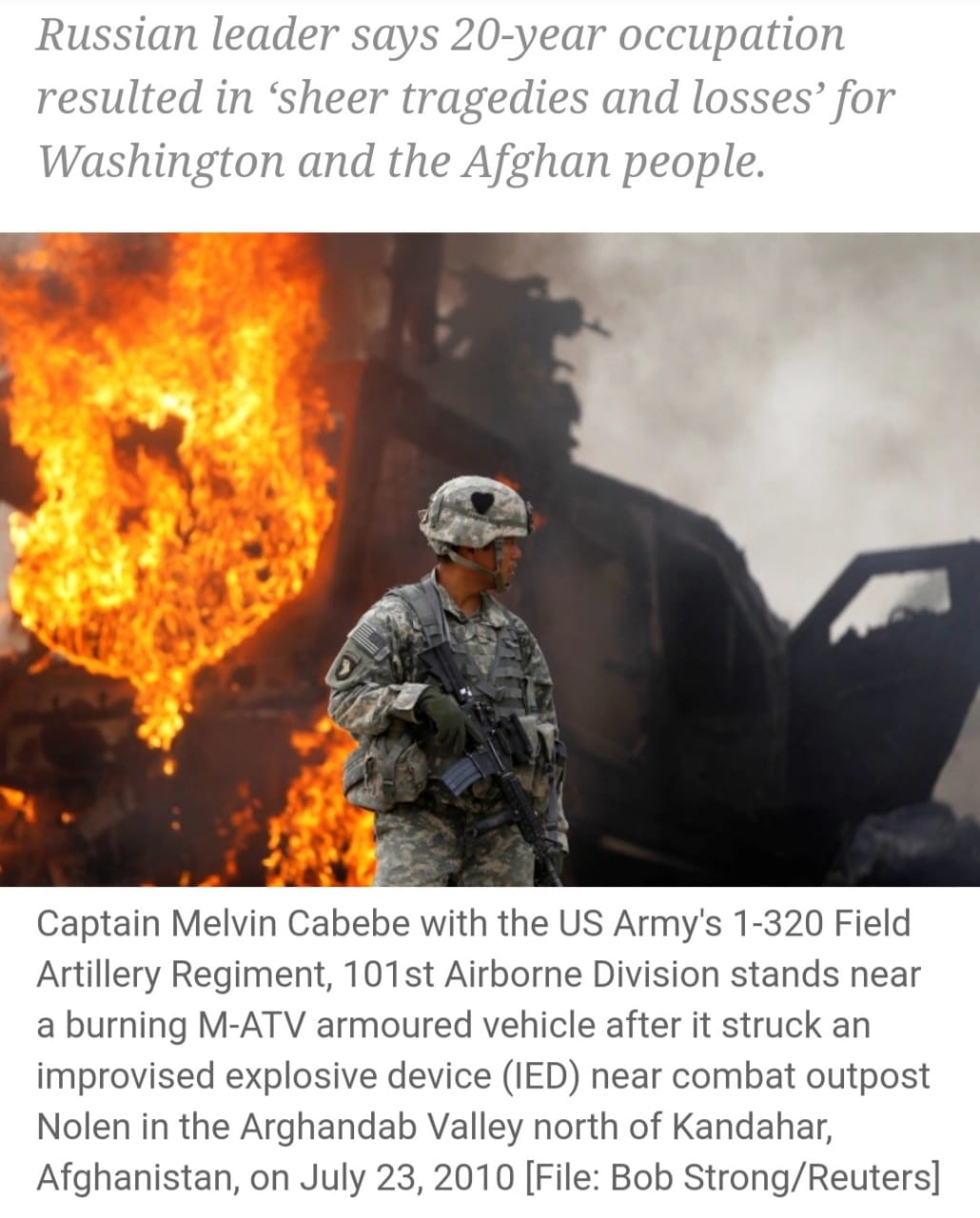 The United States’ 20-year campaign in Afghanistan ended in tragedies and Washington achieved nothing, Russian President Vladimir Putin has said, adding that the US army’s attempt to ingrain their norms in Afghanistan was futile.

Speaking on Wednesday at a meeting with teenagers in the Russian far eastern city of Vladivostok to mark the start of the school year, he said: “American troops were present on that territory (of Afghanistan) for 20 years, and over those 20 years they were trying – this can be said without offending anyone – to civilize the local people, but in fact, to impose their norms and standards of life in the broadest sense of this word, including the political organization of society.

“The only result is tragedies and losses for those who were doing that – for the United States – and especially for the people who live on the territory of Afghanistan. This is a zero result, if not negative.”

It is “impossible to impose anything from outside”.

The Russian leader has a track record of criticizing Western countries for trying to impose their values on non-Western nations and Moscow has regularly slammed US policy in Afghanistan, which is now controlled by the Taliban after its takeover.

The group shocked Western leaders and observers with its rapid advance ahead of the American pullout on August 31.

Last week, Putin said Russia would not interfere in Afghanistan and that Moscow had learned from the Soviet occupation of the country. Moscow fought a 10-year war in Afghanistan that ended with the Soviet troops’ withdrawal in 1989.

Putin has also complained about Western countries trying to place Afghan refugees in Moscow-allied Central Asian states, fearing that “radical Islam” would spill over into nations he is friendly with.

At the same time, Moscow has been cautiously optimistic about the new leadership in Kabul, saying it would not meddle in domestic affairs. But at home, the Taliban is still registered as a “terrorist” organization.

Russia has evacuated hundreds of people from Afghanistan and plans to lay on further flights, while Putin’s special representative on Afghanistan, Zamir Kabulov, said last week that Moscow’s embassy was working to establish relations with Afghanistan’s new Taliban rulers.

“We are establishing ties (with Taliban officials), our embassy in Kabul is working quite actively on this,” he told Russian state television. “We have had such contacts for a long time and we will work further on them.”

Recently, a Russian official dismissed any resistance efforts to the Taliban, saying there is no real alternative to the group.