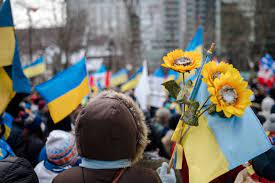 A group of children in Russia was allegedly ushered into a police van and later put behind bars by law enforcement after they attempted to lay flowers at the Ukrainian Embassy in Moscow.

The news of the children’s alleged arrest first made the rounds Tuesday in a now-viral Facebook post from a woman, Alexandra Arkhipova, whose Facebook page lists her as a docent at Russian State University. The post, written in both Russian and English and titled “Children, war, and a police van,” describes events that allegedly took place with two Moscow women and their five children. The kids were listed as ranging in age from 7 to 11 years old.

“[The children] went to put flowers at the Ukrainian Embassy,” the post said, adding that they had drawn a poster to go along with the flowers. Various translations from Russian journalists on Twitter said that the poster created by the children read either “no war,” “stop war” or “no to war.”

When they attempted the peaceful protest, though, the post alleges that all of the children were detained by law enforcement and held in a police van.

Eventually, the post said, the children were taken to a nearby Moscow police station and placed in holding. A group of photos accompanying the post appears to show the children in a variety of locations, including the back of a police van, as well as what appears to be a small holding cell.

“Phones were taken away from parents (or will be soon),” the post said. “The policemen are shouting at the parents teaching these brave moms and their children, that the children were putting into the children’s care right now and these moms would lose their parent’s rights [sic].”

The post then asked for the help of the community, including journalists and human rights activists, in order to shed light on the alleged arrests.

In an update hours later, Arkhipova wrote: “All of them finally was released. Now they will meet a court trial.” It is unclear what the children were charged with.

After the post gained traction online, people took to social media to express their anger at the alleged arrest of children by Russian authorities. Nika Melkozerova, the executive editor of The New Voice of Ukraine, tweeted: “Arresting own children in Russia?Wtf!!!??”

Julian Röpcke, a journalist for German tabloid newspaper Bild, tweeted photographs of the arrested children in juxtaposition with pictures of what appeared to be Ukrainian children taking shelter from the Russian invasion.

“They are all Putin’s victims,” Röpcke said. “Let’s beat this criminal together!”

In the aftermath of the invasion of Ukraine, protests that are typically uncharacteristic under the Putin regime broke out in numerous Russian cities, including the large metropolises of Moscow and St. Petersburg. Reports vary as to the total number of Russians arrested, but the figure has been estimated as anywhere from 2,000 to 6,000 since the beginning of the fighting.

Reuters reported that protests of various sizes have continued to break out in at least 48 Russian cities as the invasion of Ukraine moves forward.