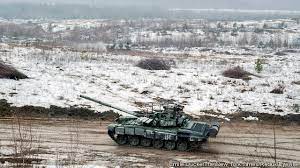 But they seem to be pretty much useless

A LOT OF Russian tanks involved in the invasion of Ukraine have strange cages welded over the roofs of their turrets. Strange and apparently useless—for many pictures have emerged of destroyed vehicles surmounted by them. Sometimes, indeed, the cage itself has been visibly damaged by an attack that went on to hit the tank beneath.

Stijn Mitzer, an independent analyst based in Amsterdam, has looked at hundreds of verified photographs of destroyed Russian vehicles. He thinks that, far from acting as protection, the cages have done nothing save add weight, make tanks easier to spot, and perhaps give a false and dangerous sense of security to the crew inside. They have indeed been mockingly dubbed by Western analysts as “emotional support armour” or “cope cages”.

Superficially, they are an example of what is known in military circles as field-expedient armor—in other words, stuff that has been added to vehicles after they have entered service. Often, field expedients are sensible retrofits. Gareth Appleby-Thomas, head of the Centre for Defense Engineering at Cranefield University, in Britain, observes that they have ranged over the years from sandbags, via sheets of armor subsequently (and often crudely) attached to the outsides of tanks, to factory-made upgrade kits.

The new cages, the fitting of which seems to have begun late in 2021, appear to be a variant of so-called slat or bar armour. Such armor can provide effective lightweight protection if used correctly (as it is, for example, on American Stryker armored personnel carriers). But in this case that seems not to have happened. They might thus be seen as symbols of Russia’s inadequate preparation for the campaign as pertinent as its failures to neutralize Ukraine’s air defenses and to shoot down that country’s drones.

One of the principal threats to armored vehicles are HEAT (High Explosive Anti-Tank) weapons, such as the Russian-made but widely employed RPG-7. The warheads of these rocket-propelled grenades are shaped charges—hollow cones of explosive lined with metal. When the explosive detonates it blasts the metal lining into a narrow, high-speed jet that is able to punch through thick steel. According to Dr. Appleby-Thomas an RPG-7 can penetrate 30cm of steel plate.

And RPG-7s are the babies of the bunch. Other, far more powerful, shaped-charge anti-tank weapons used by Ukrainian forces include Javelins supplied by America, NLAWs (Next Generation Light Anti-tank Weapons) supplied by Britain and drone-borne MAM-L missiles, supplied by Turkey.

HEAT warheads may be countered by what is known as explosive reactive armour, or ERA. When this is hit, a sheet of explosive sandwiched inside it blows up and disrupts an incoming warhead before it can detonate. Many Russian tanks are indeed fitted with ERA. However ERA may, in turn, be defeated by a so-called tandem warhead, in which a small precursor charge triggers the amour’s explosive before the main warhead detonates.

Slat and bar add-on armors are a lighter and cheaper way to counter RPGs, though even if used correctly they are, literally, hit or miss protection. The spacing of the bars or slats is crucial. If a rocket hits a bar it makes little difference, for its warhead will detonate anyway. But if it gets trapped between bars it will probably be damaged in a way which means that the signal from the nose-mounted fuse cannot reach the detonator.

This approach is known as statistical armor, because the protection it offers is all or nothing. It is typically quoted as having a 50% chance of disrupting an incoming RPG. But Dr. Appleby-Thomas notes that it only works against munitions with a nose fuse, which Javelins, NLAWs and MAM-Ls do not.

Russia has been fitting slat armor to vehicles since 2016, but the design of the new cages, seemingly improvised from locally available materials, is baffling. The cages appear to be oriented in a way that protects only against attacks from above. In principle, that might help protect against Javelins, which have a “top attack” mode in which they first veer upwards and then dive to punch through a tank’s thin top armor. But, as Nick Reynolds, Land Warfare Research Analyst at RUSI, a British defense think-tank, notes, even if the cage sets off a Javelin’s precursor warhead, the main charge is still more than powerful enough to punch through the top armor and destroy the tank—as the Ukrainian army itself proved in December, when it tested one against a vehicle protected by add-on armor replicating the Russian design. As expected, the Javelin destroyed the target easily.

Another idea is that the cages are a response to events in the conflict between Armenia and Azerbaijan in 2020, in which large numbers of Russian-made Armenian tanks were destroyed from above by MAM-Ls. Samuel Cranny-Evans, another analyst at RUSI, observes that these missiles do not have the RPG-7’s nose-mounted fuse. Hitting the cage might detonate the warhead prematurely and reduce its effectiveness, but Mr. Cranny-Evans does not believe this would prevent it destroying a tank.

A third possibility is that the cages are in fact meant as protection against RPGs—which the Ukrainians have in abundance—being fired on tanks from above. This is not likely to happen in an open battlefield, but is a preferred tactic in urban warfare, where buildings offer shooters the necessary elevation.

Even if that is true, though, it comes at a price. Patrick Benham-Croswell, a former tank officer in the British Army and author of “The Dangerous World of Tommy Atkins: An Introduction to Land Warfare”, notes the cages limit the ability of the machine-gun mounted on the top of the turret to swing upwards to engage enemies firing down on the vehicle.

Dr. Appleby-Thomas speculates that the cages’ true purpose might therefore be to protect against small, improvised bombs dropped from drones. Ukraine has developed munitions based on hand-thrown anti-tank grenades, by fitting them with fins so that they can be dropped accurately from commercial drones. These drone-borne bombs might present a real danger in urban areas. But the cages would only blunt such attacks rather than providing complete protection, because they form only a partial screen over the turret, and leave other areas completely exposed.

The last possibility, then, is that the gibes about the cages being emotional support armor are actually correct, and that they have been added simply to improve morale by convincing the troops inside that they are safe. As Mr. Benham-Croswell notes, soldiers often take the view that every little helps.

Believing you are safe is not, however, actually the same as being safe. A pointed historical parallel might be found in the ghost dance shirts, supposed to have supernatural powers to stop bullets, which were worn by some Lakota warriors in their uprising against the American government in 1889 and 1890. These certainly improved morale. But they didn’t save their wearers at Wounded Knee.