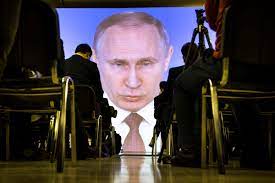 What Russia’s president got wrong

No plan of battle survives contact with the enemy, but his has fared worse than many

The Russian invasion of Ukraine is not going to plan. In Kharkiv, the country’s second city, Ukrainian defences appear to have repulsed a major assault. In the south Vladimir Putin’s forces have taken territory, but partly by avoiding Ukrainian towns. Around Kyiv, Ukrainian forces have foiled numerous attacks. In the capital itself, Volodymyr Zelensky, Ukraine’s president, has cut a defiant figure. In contrast to the drug-addicted Nazi Mr Putin describes in his speeches, Mr Zelensky has taken his place at the head of a nation buoyed by courage and patriotism.

The war is still in its first week. Russia’s president can summon reserves of military force that he could yet use to surround Ukrainian cities, including Kyiv, at terrible cost to civilians and the soldiers of both sides. It is still a war that Mr Putin may well win, in that he could eventually impose a puppet government in Kyiv or Kharkiv, the original Soviet capital of Ukraine.

Yet, in a broader sense, the moment Mr Putin is obliged to wage such a war of attrition, he will already have lost. In Ukraine the patriotic spirit forged from his targeting of cities and their inhabitants has already ensured that any government which rules in his name will be seen as illegitimate. Across much of the world, he would become even more of a pariah. And at home, he would preside over a society strangled by sanctions and trampled under his repressive regime.

It seems ever clearer that the Russian elite is appalled—and impoverished—by his paranoid adventurism. The worse his plans go in Ukraine, the sooner cracks will start to appear in his regime and the more the Russian people will take to the streets. If Mr Putin is to hold on to the Kremlin, he may be obliged to impose terror of a severity that Russia has not seen for decades.

Mr Putin’s first mistake was to underestimate his enemy. Perhaps he believed his own propaganda: that Ukraine is not a real country, but a fake erected by the cia and run by crooks who are despised by the people they govern. If he expected Ukraine to collapse at the first show of Russian force, he could not have been more wrong.

Mr Putin’s second mistake was to mismanage his own armed forces. His air force has so far failed to dominate the skies. He has laboured to reassure his people that Russia is not engaged in a war, but just what he calls a “denazification” operation. Soldiers, unsure of what they are supposed to be doing, have turned up in Ukraine expecting to be welcomed as liberators. If he orders troops to slaughter their Ukrainian kin in large numbers, they may not obey. If many of his troops die in the attempt to crush Ukrainian cities, as is likely, he will not be able to cover it up at home.

And his third mistake was to underestimate the West. Again, perhaps he believed that it was too decadent and self-absorbed to muster a response. As a dictator who may find it hard to understand that people’s faith in democracy is genuine, he has almost certainly been surprised by the upwelling of popular support for Ukraine—the support that sees Londoners stand to the Ukrainian anthem and the Brandenburg Gate in Berlin lit up in the blue and gold of the Ukrainian flag.

Inspired by Ukrainian courage and urged on by their own citizens, Western governments have at last found the will to fight back. They have rightly refrained from direct military action against Russia, such as imposing a no-fly zone. Instead, at their third attempt, on February 26th, they agreed on genuinely powerful sanctions, against Russia’s central bank and its financial system. These may block access to the country’s reserves and undermine its banks.

The next day these sanctions met with a furious Russian response. Mr Putin, having consulted his military chiefs, put the country’s nuclear forces on higher alert. He was equating economic sanctions with nuclear war.

That is not only morally wrong, but it also raises the prospect of a catastrophic escalation. That does not make the West’s use of sanctions a mistake. Mr Putin’s belligerence is evidence of how dangerous he is. Backing away for fear of what he might do would only invite the next enormity.

Instead, Russia’s warning must be countered by the unambiguous declaration in the un Security Council and by all nuclear powers, including China and India, that issuing nuclear threats is unacceptable. At the same time, senior American officers need to remain in close contact with their Russian counterparts, to warn them that they will be held personally accountable for their actions. The world cannot afford for Mr Putin to miscalculate again