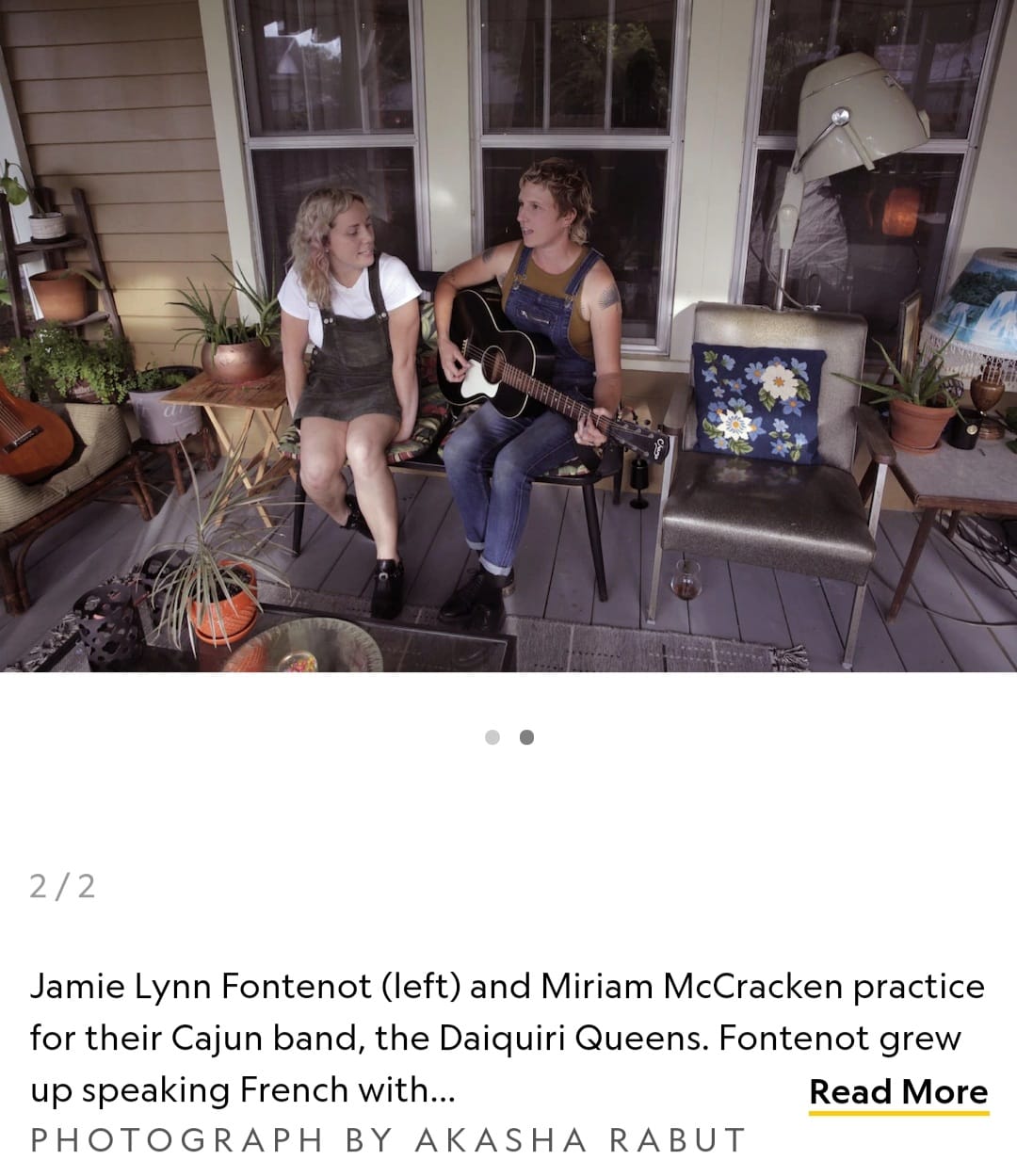 When Janice Prejean was growing up, if she wanted to speak with her grandparents, she had to do it in French. To crack the code of the private conversations and jokes that flew over the heads of children at family gatherings, she also needed to know the language.

“My lifestyle as a child and a young adult was immersed in moving between the Cajun world and Les Americains,” she says.

Prejean, who was raised in Ossun, a tiny, unincorporated community in southwest Louisiana, is 64 now. Her story is an echo of the thousands of people in the region with Francophone ancestry. What makes her version a little different, however, is that she learned the language. Many people her age never did. French was a source of shame—Cajuns were often labeled stupid and backward—and parents wanted to shield their children from prejudice.

That started to change during the latter half of the 20th century with the launch of efforts to improve the understanding of Cajun heritage—not to mention attract tourism. Programs popped up to turn the tide on the diminishing use of the French language, including establishing immersion programs in schools and flying in teachers from other Francophone nations.

Yet a generational divide remains. The dialect of aging grandparents and great-grandparents often doesn’t translate to the “standard” French that elementary- and high-school-age children are learning. To bridge that gap, locals established a new French language and literacy school for adults in the tiny town of Arnaudville, which sits at the intersection of two bayous and two Louisiana parishes and has become the unlikely hub for the French revival.

The story of that transformation starts with Mavis Frugé.

‘All French is good French.’

At the age of 83, Frugé likes to say she’s negotiating with God about an extension so she can see her work through.

“Look how old I’m getting to be!” She’s laughing, but there’s a sense of urgency driving everyone here looking to preserve and grow French in southern Louisiana. During the pandemic, 39 residents of local nursing homes died. That could represent a significant loss of language as well.

About 15 years ago, Frugé hosted the town’s first French Table, with the help of visual artist George Marks, founder of the Nunu Art and Culture Collective in Arnaudville. The idea, borrowed from the nearby city of Lafayette, is to gather people together to share a meal while conversing solely in French. It doesn’t matter whose French; it just has to be French. Their first event was a blowout—someone counted 125 attendees—and they’ve been going ever since.

Since the early 1990s, Frugé has opened her home to strangers and university students so they can hear the French spoken in the area, whether it’s Cajun or Creole—loosely defined terms often used for those born in Louisiana but of French, Spanish, or African descent. Through those visits, Frugé has come to understand the uniqueness of Louisiana’s French, like how her word for “car” predates the word used in France by so many years that it’s more closely linked to the word for “chariot.”

The visits have allowed Frugé to see how her native language is stitched into the wider linguistic fabric of the world, a lesson she’d already begun to understand after her husband’s military job took her away from Arnaudville for 25 years. She and her husband would often have their accents mistaken for European. Though they occasionally heard jabs about Cajun people, she found freedom and excitement in the world open to her as a bilingual person.

When her family returned home to Louisiana for good, Frugé no longer tolerated dismissals of Cajun and Creole French. To her, it’s crucial to offer validation that the French she and her neighbors speak are as worthwhile as any other version.

As Frugé says, “All French is good French.”

Just decades ago, that was a radical idea.

It’s difficult to find someone here who doesn’t know where their French comes from. There are those, like Prejean, who identify as Cajun and can trace their ancestry to people expelled by the English from Canada’s Acadia region in the 18th century, an era known as Le Grand Dérangement (“the Great Upheaval”). And there are others, like musician Louis Michot, who can trace a line to France through Haiti, or Janie Luster, whose Houma Choctaw ancestors spoke French.

That linguistic history binds together these groups in a country where otherness has often proven a liability. But listen carefully to the distinctions between speakers, the vocabularies of the language’s various branches growing into different sounds depending on whose mouth it comes from and where that person was raised, dialects shapeshifting within the span of a single bayou.

Prejean’s father was born in 1931, 15 years after the Louisiana Board of Education passed a rule declaring that only English be taught in schools.

“He would tell stories of being a child … who spoke nothing but French, and at five going to school, and he doesn’t know how to ask to go to the bathroom and so he soiled his shorts,” Prejean says. “There’s shame involved in that. … This is throughout the culture. If you talk to anyone who had relatives in that era, they wrote lines on the board: ‘I will not speak in French. I will not speak in French.’”

Michot’s family was on the other side. They were teachers in Evangeline Parish who passed down the rules given to them first by the Board of Education and then, in 1921, codified in Louisiana’s constitution.

“My great-grandparents were the ones who enforced Americanization,” Michot says. “If you’re American, speak English. To go against that at the time was to sell your family short of the American dream, and to teach your children French was to indoctrinate them in a life of toil and poverty.”

Decades later, Michot and his wife, artist, and educator Ashlee Michot, attended the renowned French immersion program at Université Sainte-Anne in Nova Scotia. They were tracing the same pilgrimage made by countless other Louisiana adults who sought to dive headfirst into the language, including Frugé, who attended the school to work on reading and writing. That experience, the Michots learned, was just a starting point, the first step on an endless journey.

“Anybody can go to Paris or Quebec and learn French, but the beauty of Louisiana French? It’s deep,” Louis Michot says. “And as with anything in Louisiana, it’s hard to find. It’s not like, ‘Here’s the trail, go walk our beautiful path!’ Nah-uh. It’s private property, and you have to know how to get in yourself.”

Ashlee Michot started searching for that pathway as a young mother. With her husband gone most of the time as a touring musician, she’d turn on the radio to hear “La Tasse de Cafe,” a local radio show featuring the voices of Louisiana’s aging French speakers, whose stories became the companion soundtrack as she raised her young boys in their home on the outskirts of Arnaudville. It was through those hours that Ashlee came to understand the vastness of the Louisiana French vocabulary.

“When I was a kid and I’d hear French, I’d think, it’s impossible. It’s off-limits,” Ashlee says. Now “I’m voracious about it. … If every structure in Louisiana French grammar doesn’t survive, at least I’m trying. It takes an individual effort.”

Eventually, Ashlee, who weaves what she learns about Louisiana French into the language classes she teaches at the Arnaudville high school, started recording the shows. Now, she has hundreds of hours on tape.

“It’s poetry,” she says, “and it’s deserving of respect.”

Amanda LaFleur grew up in nearby Ville Platte, and though members of her family knew only French, it took years before LaFleur felt like she’d mastered the language. But once she did, it became impossible to stop exploring it.

Eventually, LaFleur was hired by Louisiana State University (LSU) in Baton Rouge to create a Louisiana French program. She later partnered with Frugé to bring students to Arnaudville to learn the nuances of the language.

“We’re providing real communication,” LaFleur says of the collegiate programs that have visited Arnaudville. “We’re also teaching about the authentic aspects of the culture. They’re learning about traditional food or dances; about the crawfishing industry; about Mardi Gras; or how the Houma Indians use garfish scales to make jewelry.”

If it’s up to Frugé, there will be no more forgetting.

Two years ago, the Saint-Luc French Immersion and Cultural Center, the school she helped found, got its own building: a former nursing home in the center of town. Progress was slowed by the pandemic, but volunteers have been hard at work refurbishing the building and gathering the information and money they’ll need to make it fully functional. Already, it houses books chronicling Acadian genealogy as well as donated handicrafts and folk art that will help visitors and residents learn the language.

Saint-Luc is a grassroots-driven effort, which Frugé hopes will help it become the needed link between Louisiana’s formal school programming and members of the community who are interested in learning a little—or a lot—of Louisiana French. Eventually, Saint-Luc will also house visiting students.

In the meanwhile, the French Tables have continued, and Saint Luc’s inaugural class got underway.

Prejean was one of the first students.

Though she feels confident enough speaking French, she wanted to fill the gaps in her reading and writing so she can chronicle her story for future students, adding yet another chapter to the Francophone history here.

Ask Frugé why she’s the one who made this happen in Arnaudville, and she shrugs off the question. Somebody had to, she says.