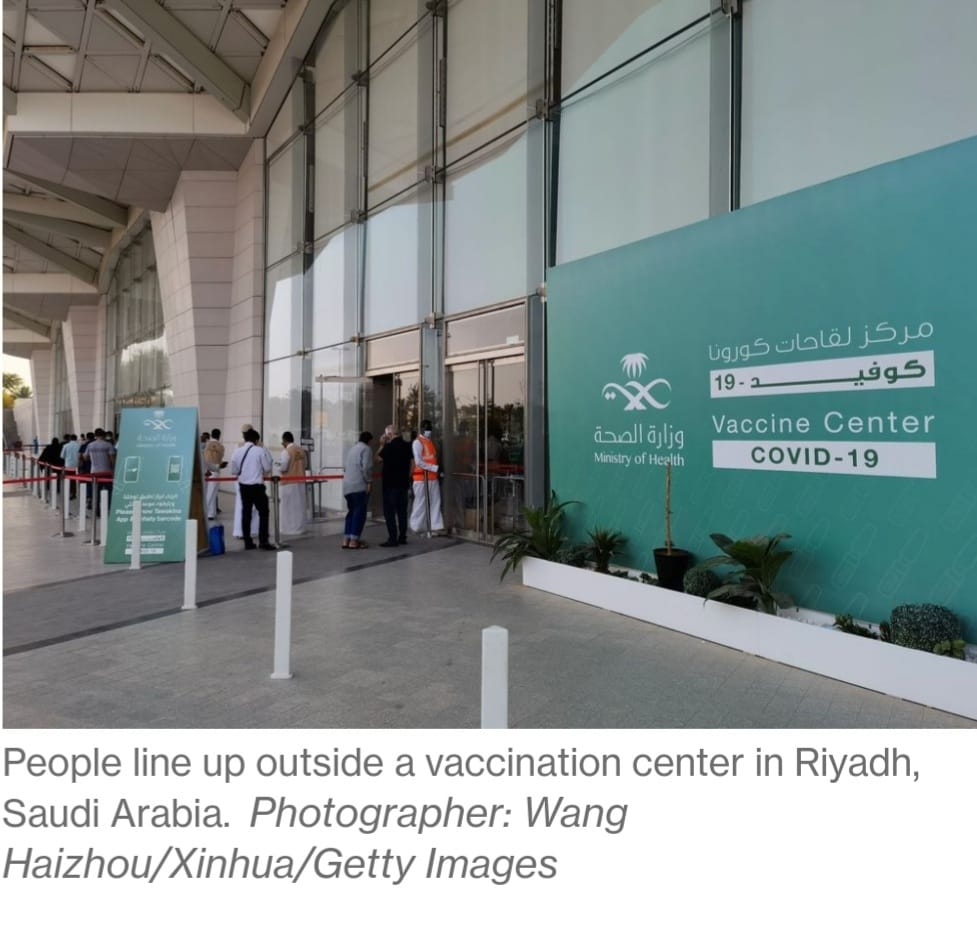 A security guard stands at the entrance to every mall in Saudi Arabia’s capital, ready for a pandemic routine shoppers are getting used to proving their vaccination status on a government phone app that tracks their location at all times.

A dystopia for opponents of vaccine requirements from the United States to France is already a reality in Saudi Arabia, which enacted what amount to some of the strictest immunization rules in the world on August 1.

As the highly contagious Delta variant of Covid-19 sends other countries back into lockdown, officials in the world’s largest crude exporter are counting on a strategy that makes vaccination all but mandatory to keep their economy open. That’s made the nation of 35 million a test case in what happens when people who are reluctant to get inoculated are pushed into a corner.

So far, the policy’s working; vaccine uptake has soared since the rules were announced, new cases are declining and Google mobility data shows workplace visits are down just 6% compared to a pre-pandemic baseline, versus 50% in Greater London. But Saudi Arabia’s experience also shows the limits of policies that exclude the unvaccinated from offices, schools, and most public places; even in an absolute monarchy that criminalizes dissent, implementation hasn’t been easy.

“The government is forcing it on citizens — this is complete slavery,” said 23-year-old Rawan, an unemployed law graduate who took one dose but doesn’t want a second because she’s worried about long-term side effects. Like other Saudis opposed to the rules, she asked Bloomberg to withhold her last name because of the risks of criticizing the state.

The Ministry of Health and the government’s Center for International Communication didn’t respond to requests for comment. Officials have repeatedly stressed the safety and efficacy of the vaccines and said the requirements help protect the public.

Mandatory vaccination has become a heated topic around the world as Covid-19 cases surge anew, sparking legal debates and protests as employers and governments tighten requirements. France has instituted a vaccine pass that’s now required to access a slew of public venues, while New York City has introduced mandatory immunization for teachers and civil servants and anyone eating indoors at a restaurant or visiting a gym or entertainment venue. Indonesia has threatened to impose fines on those resisting vaccination.

But few countries have imposed restrictions as tight as those in Saudi Arabia, where refusal to vaccinate can block shoppers from grocery stores, prevent 12-year-olds from attending school, stop citizens from traveling abroad and cost workers their jobs in every sector.

Immunization spiked significantly as the August 1 deadline for the vaccine pass approached, with the kingdom offering shots from AstraZeneca to all adults as well as Moderna and Pfizer-BioNTech to everyone aged 12 and above. The number of fully-vaccinated people has jumped to 42% of the population from just 13% six weeks ago. Around 63%, including 99% of public school students aged 12 to 18, have received at least one dose.

Saudi Arabia still lags behind some countries with a similar population  — like Canada, where 65% of residents are fully vaccinated — but it’s catching up fast as the focus shifts from dispensing as many initial shots as possible to ensuring people get their second dose.

“I feel like we’re ahead of other countries,” said Dunya Fahad, a 27-year-old vaccinated perfume saleswoman, spraying fragrance around her stall to attract customers.

Among a subset of the population, however, tightening vaccine rules are hardening opposition and stoking fear. The system, based on an app called Tawakkalna, also complicates the lives of people who lack digital literacy or consistent Internet access, like some immigrant workers. And even in Saudi Arabia, enforcement has been spotty, relying on individual guards and employees who don’t always check closely.

The World Health Organization has cautioned against mandatory vaccination for the general public, advising decision-makers to consider whether it’ll “threaten public trust or exacerbate inequity for the most vulnerable.”

Despite lingering hesitancy, officials expect at least 70% of the population to be fully immunized by October. Borders have reopened to vaccinated travelers only, and the government is planning an entertainment extravaganza with hopes to draw 20 million people.

Proof of vaccination or recent recovery is required not only at events but at every commercial establishment, government buildings, office, and more. So far that means one dose, but some places, like educational institutions, require two.

It isn’t possible to opt out by presenting a negative virus test as it is in some countries. And the rules are expected to tighten as more adults get their second dose.

That’s given reassurance to Nouf Mahdi, 26, as she searches for work after graduating from university with an English degree. “Sure, we go out with masks, but thank god we’re happy and living our lives and not going back into quarantine,” she said. “It’s difficult to think that the error of a small group could harm all of us.”

For some of those suspicious of the jabs, however, the rules are only toughening resolve.

“I was looking for a job recently but now I stopped because all of the entities require a vaccine,” said Mashael, 24, a social studies graduate, “and I will never take it no matter what.”