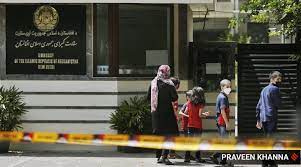 A day after the Taliban announced its cabinet, with no representation of women and lack of adequate representation of ethnic minorities, Afghanistan’s embassy in New Delhi on Wednesday issued a statement in the name of the Afghan Foreign Ministry and “condemned” the announcement by the Taliban of its “so-called cabinet” as “illegitimate and unjustifiable”.

It will open up the issues of recognition of the new regime led by the Taliban for the majority of the countries, including India.

India’s position will be key given that it is a non-permanent member of the UNSC, and is leading the UNSC sanctions committee. The UN will have to take a call on the fate of the UN Assistance Mission in Afghanistan, whose mandate expires this month. Also, the UNSC sanctions committee will have to decide on the exemption of sanctions to the proscribed terrorists who are part of the cabinet.

According to sources, at least 17 of the 33 — half of the Taliban’s cabinet — are on the UN terror list.

The statement issued by Afghanistan’s Foreign Ministry, which essentially represents the previous regime, said that “the Islamic Republic of Afghanistan, which emanates from the free will of the people and epitomizes the vision and aspirations of millions of citizens who made the ultimate sacrifice for the cause of sovereignty, democracy, freedom, and independence of their country, condemned the announcement by the Taliban”.

It said the decision “goes against the will of the absolute majority of the people of Afghanistan”, “international agreements, relevant United Nations Security Council, and United Nations Human Rights Council resolutions and undermines the national interests of Afghanistan, including security, stability, unity, and prosperity of the country and its people”.

It said the announcement of the Taliban cabinet will result in “undermining Afghanistan’s political, ethnic, and social diversity, lead to increased tensions, and also undermine the prospect of a comprehensive and lasting peace in the country”.

Moreover, it said that “it goes without saying that the Taliban have once again reaffirmed their blatant disregard and violation of the fundamental rights and important role of Afghan women and other segments of society”.

Note: Every article published on this section is extracted from several most genuine authentic sources on our daily life who brings us qualitative LR&A honors the spirit of Journalism of these global giants of News Broadcasting across the globe and outer space, some of them Are, HUFFPOST, Aljazeera, New York Times, CNBC, wall street journals, Reuters, google news, Wikipedia, the Hindu, USA Today, Financial Times, Times Magazines, United Nation Journals, BBC, National Geographic, animal planet, History Tv, Fox network etc. Legal research & Analysis recommends all users kindly read the original contents published by these mainstream media giants, simply click the link of the headline of the post you want to read also share with your friends quality information do not pay attention to unverified sources of News, fake news, news that can cause harm public at large are considered as fake news, LRA promotes the awareness regarding the spreading of fake news, or news without any genuine source of platform, kindly follow the instruction and help community flourished.