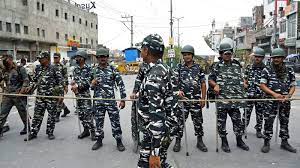 The Centre has expressed serious concern over the content shown on TV channels in recent times, especially on the violence in Delhi’s Jahangirpuri area and the Russia Ukraine Conflict

The government has also issued an advisory to these channels against airing ‘unauthentic, misleading, sensational and provocative content’.

In its advisory, the ministry of information and broadcasting said, “It has, however, been found that in the recent past several Satellite TV channels have carried out coverage of events and incidents in a manner which appears to be unauthentic, misleading, sensational and using socially unacceptable language and remarks, offending good taste and decency, and obscene and defamatory and having communal overtones, all of which appear to be violative of the Programme Code and infringement of the provisions of sub-section (2) of Section 20 of the aforementioned Act.”

The Centre cited the television channels coverage of the recent communal clashes in Delhi’s Jahangirpuri on the occasion of Hanuman Jayanti.

The Centre made strong objections to ‘provocative headlines and videos of violence that may incite communal hatred among the communities and disrupt peace and law & order.’

The channels have also been accused of disrupting the probe by playing ‘scandalous and unverified footages of a specific community thus aggravating the communal tensions.’

“It was also observed that in the news, some of channels broadcast debates having unparliamentary, provocative and socially unacceptable language, communal remarks and derogatory references which may have a negative psychological impact on viewers and may also incite communal disharmony and disturb the peace at large,” the Centre said.

The government also took note of the recent coverage of Ukraine war by television channels.

“It has been observed that channels have been making false claims and frequently misquoting International agencies/actors. The channels are using ‘scandalous headlines/taglines’ that are completely unrelated to the news item.”

The Centre alleged that many of the journalists and news anchors made fabricated and hyperbolic statements to incite the audience.

current affairs Tags:The channels are using 'scandalous headlines/taglines' that are completely unrelated to the news item; ‘Refrain from airing misleading