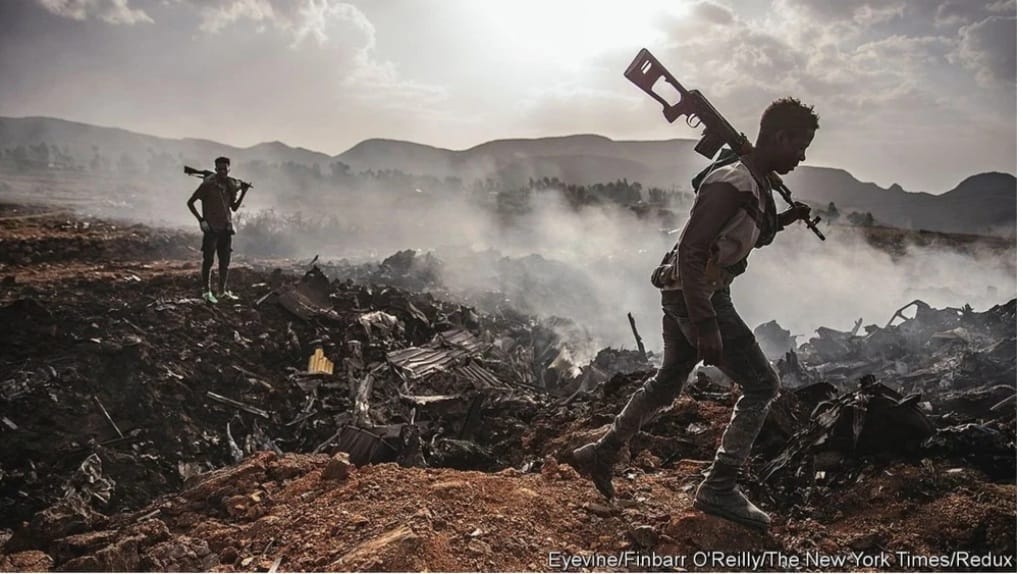 From the very beginning, the hasty evacuation seemed to be predestined to a paradoxical ending. During the last two weeks, reams of videos depicted the devastating scenes at Kabul airport: thousands of Afghans waiting desperately outside the airport; U.S. planes taking off despite knowing there were people clinging to the undercarriage. In last week’s suicide bombing attack, Afghans were killed not only by the explosion but by American troops who fired at the crowd.

The war that lasted 20 years ended on the back of blood and tears shredded by countless casualties.

Afghans who helped the U.S. military “are not going to be left behind,” U.S. President Joe Biden said at the White House in July.

Afghans put their faith in Biden’s promise, or more precisely, had no choice but to do so. So before the Taliban entered the capital, thousands of Afghans swarmed into Kabul airport, regarding it as the last hope of their escape. For nearly half a month, the facility witnessed countless tragedies. Just two days before the U.S. withdrawal, at least 40 people died from stampedes and gunfire.

“Kabul is … a thousand tragedies per square mile,” renowned Afghan-American writer Khaled Hosseini wrote in his book “And The Mountains Echoed.” Unfortunately, the vast majority of protagonists in these real-life tragedies were destined to be left behind. Even U.S. media have had to admit that many people were callously abandoned.

Afghans were blocked outside the airport gates throughout the entire evacuation period. A U.S. special immigrant visa – what Afghans saw as their lifeline – was like a useless piece of paper, failing to get most of them into the airport. As for the few “fortunate” who were let in, they would often have to part with their loved ones.

A reporter captured this heartbreaking scene: two homeless children were left outside the gate, wailing and calling for their parents. They were ignored, because their parents obtained the certificate for entry, and they didn’t.

August 26 was destined to be a nightmare for Afghans, with over 170 dying in a suicide bombing attack at Kabul airport.

A ditch outside the airport was filled with bodies, and the water running through it turned red. In downtown Kabul, ambulance sirens reverberated through the streets and hospitals. Many of the wounded made it to the hospital but didn’t make it out alive.

On the other hand, the death of 13 U.S. service members also made the day the deadliest in the last 10 years for U.S. military operations in Afghanistan. In a press conference at the White House, President Biden pledged to make ISIS-K, which has claimed responsibility for the atrocity, pay.

But briefly, after that day, events took a dark turn, shocking the whole world.

The U.S. has for days pointed the finger at the terrorist group. But a series of interviews and investigations by China Media Group reporters have revealed that many of the deceased were killed by American troops after the attack. A blockade implemented by the U.S. military on roads adjacent to the airport also contributed to the death of those who couldn’t make it to the hospital in time.

An even more shocking episode took place on Sunday when the U.S. military carried out a drone strike targeting a vehicle in a residential neighborhood of Kabul, killing at least 10 civilians, including six children. The Pentagon claimed the car was carrying several terrorists and loaded with explosives, and the civilians were killed because of a secondary explosion.

Witnesses told CMG reporters there were no signs of a second explosion at the site, and the so-called terrorist was actually an engineer who served for a foreign organization for 17 years. During the airstrike, all nine family members of the engineer were killed. One of them was planning a wedding, and the youngest victim was only two years old. They were waiting for the engineer’s employer to arrange their evacuation, but what they got instead was a drone strike that took their lives.

American lies were once again shredded to pieces. The Western media was busy plastering the airwaves with the tragic stories of the 13 deceased Americans, deliberately glossing over the Afghan civilians who met their deaths. But one undeniable truth – something the Western media chose to overlook – is that so-called acts of retribution cannot erase radical groups from Afghan soil, but will only drag more and more local civilians into a bottomless quagmire.

American decision-makers did not heed logic and common sense when planning for the U.S. withdrawal. It was precisely the hasty U.S. pull-out from Bagram airbase in July that led to the chaotic scenes in Kabul.

People familiar with the subject told CMG that the special immigrant visa the U.S. government issued to Afghans was actually a picture without the holder’s name and identity information. Through photocopies, many Afghans who did not have the right credentials flooded to the airport, while American troops stationed there were incapable of verifying their visas. Amid the chaos, the U.S. once again broke its promise, changing its policy to only allow American citizens, green card-holders, and nationals of NATO member countries into the facility.

In fact, evacuating all Afghans with a special immigrant visa before August 31 was destined to be a mission impossible. After the last U.S. military plane took off from the runway, the Taliban entered the airport and found the site full of aircraft and army equipment. Items that couldn’t be taken away in time were destroyed by the Americans themselves.

The Taliban fired their guns into the air in exuberant celebration. On social media, Taliban spokesman Zabihullah Mujahid announced the exit of the last batch of American troops and the full independence of Afghanistan.

The complete withdrawal has put an awkward full stop to the 20-year-long Afghan war. Americans boarded their planes, leaving behind problems and pains for the Afghan people.

(The story was written by Zhu Yunxiang from China Media Group and translated and edited by CGTN’s Li Ruikang.)