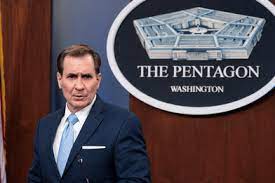 The Russian invasion of Ukraine could come ‘as early as Wednesday’
The intelligence was reportedly intercepted from Russian central command to troops on the ground
Service members take part in military exercises held by the armed forces of Russia and Belarus at the Gozhsky training ground in the Grodno region, Belarus
The CIA has warned Nato allies that a Russian invasion of Ukraine could happen on Wednesday, according to multiple briefings.

A secret service report details where the invasion could happen, as well as which units have been assigned to certain tasks, an official told US media.

The intelligence was reportedly intercepted from Russian central command to troops on the ground.

Sources have warned that the acknowledgment of a specific date could be part of a Russian disinformation effort. The official would not say how definitive the intelligence was.

The White House has publicly underscored that the US does not know with certainty whether Vladimir Putin is committed to invasion.

But US officials said that the combination of Russia’s buildup of offensive air, land, and sea firepower near Ukraine and the new intelligence about a possible date triggered a flurry of diplomatic activity on Saturday.

It comes amid warnings that Russia could be preparing to stage a ‘false flag attack that would justify an invasion of Ukraine by blaming the country.

Officials told the Washington Post that the scenario was discussed in a hasty White House meeting on Thursday evening and prompted renewed calls from the Biden administration for US civilians to leave Ukraine immediately.

President Joe Biden’s national security adviser, Jake Sullivan, said Americans should not expect the US military to rescue them in the event that air and rail transportation is severed after a Russian invasion.

The US has already accused Russia of planning a similar attack justified by falsified footage of Ukrainian violence against Russian territory or Russian-speaking citizens in the country’s east.

Mr. Biden has said US troops will not enter Ukraine to contest any Russian invasion, but he has bolstered the U.S. military presence in Europe as reassurance to allies on Nato’s eastern flank.

Servicemen are seen training with a BMP-2 in Donetsk Region, Ukraine

On Friday, the Pentagon said Mr Biden ordered a further 3,000 soldiers to Poland, on top of 1,700 who are on their way there. The US Army also is shifting 1,000 soldiers from Germany to Romania, which like Poland shares a border with Ukraine.

About 150 US troops from the Florida National Guard who are in Ukraine to help train Ukrainian forces are leaving the country, two US officials told Reuters. Most of the country’s embassy staff have been ordered to leave immediately.

Some British embassy staff and their families were also being withdrawn from Kyiv.

“There will be no British troops in Ukraine if there is any conflict with Russia,” said Mr. Heappey.

On Friday, the Government advised British nationals to leave while commercial means were still available and advised against all further travel to the country.

British nationals who choose to remain should not expect a military evacuation if a conflict with Russia breaks out, junior defense minister James Heappey told Sky News on Saturday.