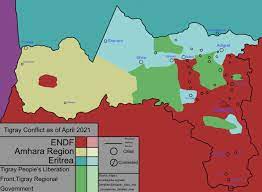 ‘There is no mercy’ for Tigrayan people, witness claims

Soldiers occupying parts of Ethiopia’s war-torn Tigray region are engaged in an ethnic purge of native people who are being thrown into concentration camps and massacred by the dozen, a report has claimed.

The Daily Telegraph cited witnesses in the northern city of Humera, near the border with Eritrea, as saying soldiers from Amhara province had been conducting a “door-to-door” search for ethnic Tigrayan people and that thousands of residents had been forced into makeshift detention centers.

The campaign of slaughter reportedly began in July following a decision by occupying soldiers to, the paper quoted an apparent witness as saying, “exterminate all Tigrayan residents in the city”.

“If it is written in your identity card that you are Tigrayan, there is no mercy,” another person told the Telegraph.

It is only the latest report of brutal attacks on civilians in Ethiopia’s civil war. The conflict began late last year when Abiy Ahmed, the prime minister, ordered troops into the region in an attempt to crush the Tigray People’s Liberation Front (TPLF).

Following decades of dominance, the TPLF had seen its power in government reduced after Mr. Abiy became prime minister in 2018, and it withdrew its representatives from Addis Ababa entirely when he canceled elections during the coronavirus pandemic – before holding its own polls.

Tensions that had simmered since Mr. Abiy’s victory boiled over into all-out war once the sides each came to regard the other as illegitimate.

The UN’s human rights office said in March it had corroborated reports of mass killings in the Tigrayan city of Axum and Dengelat, a village, for which Eritrean soldiers allied to Mr. Abiy had been blamed.

And last week several witnesses told the Associated Press they had seen Tigray forces attack a hospital and religious site in Amhara province, including with artillery. They killed civilians and looted medicine, the news agency reported.

US officials say Tigrayan fighters have “looted the warehouses, they’ve looted trucks and they have caused a great deal of destruction in all the villages they have visited”.

Tens of thousands of Ethiopians have been displaced internally or forced by the fighting to flee over the border into Sudan.

The Independent has contacted Mr. Abiy’s office for comment on the reports from Humera, as well as the office of Michelle Bachelet, the UN’s human rights chief, for more information.

The Twitter account of Ethiopia’s foreign affairs ministry promoted a post late on Sunday that read: “A new wave of false allegations being lodged by TPLF operatives giving falsified accounts to what are considered reputable Int’l media outlets.