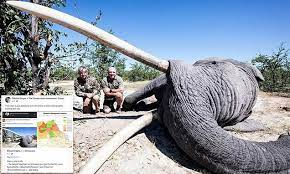 Trophy hunter kills Botswana’s biggest ‘tusker’ elephant with ivory weighing 200lb after paying $50,000 for the ‘privilege’ – sparking fury from country’s former president
Hunter named as Leon Kachelhoffer shot the elephant after paying $50,000
Only 40 ‘hundred pounders’ with more than 100lbs of ivory still roam in Africa
Kachelhoffer has said hunting will stop poachers and boost the local economy
Ex-President Ian Khama: ‘How does it being dead benefit our declining tourism’?

The elephant was in its early-50s and killed with a single shot, a hunting industry spokesperson confirmed.

There are only 40 ‘hundred pounder’ tusker elephants with at least one tusk weighing 100lb left roaming in Africa.

Kachelhoffer reposted a Facebook story describing his controversial conquest and appeared on a podcast to explain the hunt.

He told Blood Origins host Robbie Kroger that he did not expect a controversy to arise.

Kachelhoffer laughed and said: ‘That wasn’t one of the things I was thinking about.’

He added: ‘To be in a position to hunt a bull like that, it’s an incredible privilege.

‘You know, there’s more to it than shooting a bull, taking a photograph, becoming a hero and all this other nonsense.’

The hunt was slammed by ex-president Ian Khama, who outlawed trophy hunting in Botswana before successor Mokgweetsi Masisi reintroduced the practice in 2019.

He posted on Facebook next to an image of the slain elephant: ‘This was one of the largest if not the largest tusker in the country. An elephant that tour operators constantly tried to show tourists as an iconic attraction. Now it is dead.

‘How does it being dead benefit our declining tourism [industry]? Incompetence and poor leadership have almost wiped out the rhino population, and now this!’

Botswana still has 130,000 elephants, but only a small minority are the world-famous big tuskers like the one hunted by Kachelhoffer.

A second elephant weighing 90lb was also killed during a recent hunt.

Hunting industry spokeswoman Debbie Peake said: ‘The income and meat from the hunt will make a huge difference to a community.’

The elephant already had a bullet wound, Peake said, which means ‘the poachers had him in their sights.’

She added: ‘If it had been killed by a poacher there would have been no benefit to the local community.’

Though the elephant was past breeding age and its killing will not affect the gene pool, studies have shown older male mentors are crucial for younger elephants to contain their aggression and avoid conflict with humans.