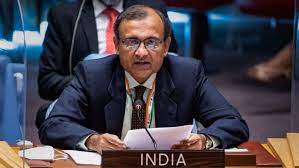 How India’s abstention from the UNSC vote is different from China
India and China both have supported Ukraine on sovereignty and territorial integrity, but Beijing has also virtually defended the Russian action by asking for Moscow’s security concerns to be addressed.
Heavy fighting is going on in Kyiv with Russian troops pushing to take control of Ukraine’s nerve center.
India’s decision to abstain from the UNSC resolution on Ukraine strikes a balance between national interest and its core belief. The tough resolution was expectedly vetoed by Russia, 11 countries supported it with India, UAE, and China choosing to abstain from the vote.

Although China has also abstained from the vote, there is a sharp contrast between the explanation of the vote by India and Beijing. Both have supported Ukraine for sovereignty and territorial integrity, but China has virtually defended the Russian action.

The Chinese explanation given by Ambassador Zhang Jun stated: “ We believe that one country’s security cannot be at the expense of the security of others and that regional security should not rely on muscling up or even expanding military blocs. The legitimate security concerns of all countries should be respected. Against the backdrop of five successive rounds of NATO’s eastward expansion, Russia’s legitimate security aspirations should be given attention and properly addressed.”

While the US, France, and the UK are expected to push this resolution before the UN General Assembly to ensure global condemnation for the Russian aggression, the situation in Kyiv is getting dire by the hour with the Red Army gaining ground in the capital of Ukraine.

According to a former foreign secretary, the Indian abstention reflected its national interest given its long strategic relationship with Russia and its ever-growing closeness with China and the client states of the middle kingdom. The expression that India was deeply disturbed by events in Ukraine in the explanation of vote reflected the Indian belief. In its explanation, India called upon all member states to honor the principles enshrined in the UN Charter, international law, and respect for the sovereignty and territorial integrity of states.

India’s explanation for abstaining from UN Security Council resolution.
“The Chinese explanation of the vote seems to support Russia while our explanation is objective and points out that this was in contravention of the UN Charter and international law. At the same time, we have kept space for diplomacy and dialogue. Our vote retains the option of reaching out and encouraging the parties to continue to engage despite the situation,” an Indian diplomat in New York said.

The UAE, in its explanation, also supported the resolution’s emphasis on the need to adhere to the principles of international law and the Charter of the United Nations, which was more in line with India’s explanation. It reaffirmed its commitment to the territorial integrity, sovereignty, and independence of all member states of the United Nations, which was again a part of the UNSC resolution.

“The result of this vote today was a forgone conclusion, but the avenues for dialogue must remain open more urgently than ever before, and we must pursue them together,” the UAE diplomat told the Council.

As India had made its stand on sovereignty and territorial integrity clear in the New Delhi Declaration of the 13th BRICS summit on September 9, 2021, Ukrainian Foreign Minister Dmytro Kuleba called External Affairs Minister S Jaishankar on Friday night and discussed the situation in Ukraine and the speedy evacuation of Indian students from the war-hit country.

The Indian reason for abstaining is also part of a strategy where New Delhi can use its good offices in near future to get all parties to the negotiating table given its traditional relationship with Russia and with natural allies in the West, particularly the US and France. It is understood that during his telephonic conversation, Ukrainian Foreign Minister Kuleba asked EAM Jaishankar for Indian currency with Russia to stop the fighting and sue for peace.

Prime Minister Narendra Modi has already asked President Putin for cessation of violence and appealed to Russia to resolve the situation through diplomacy and dialogue.