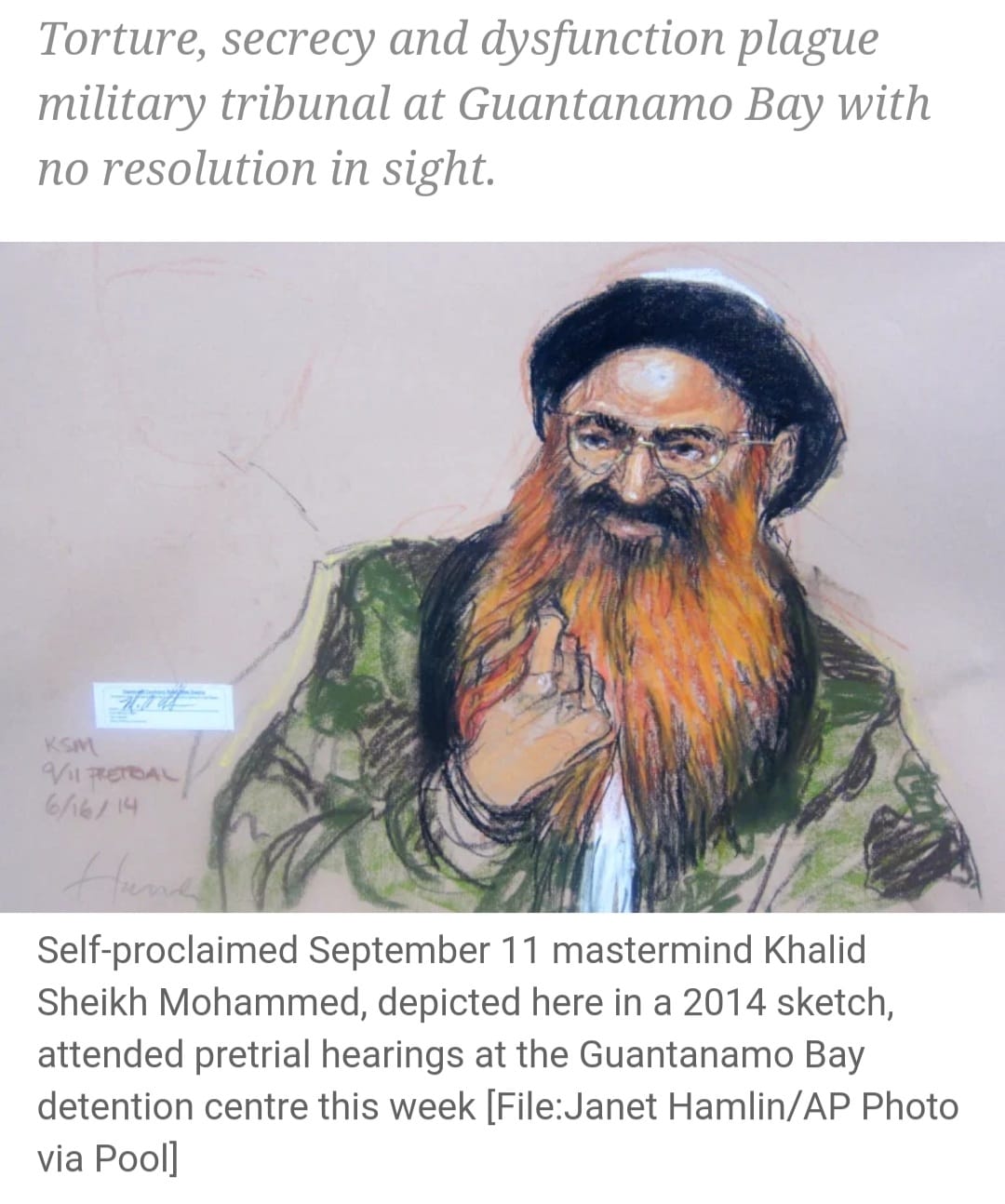 Khalid Sheikh Mohammed, the alleged mastermind of the September 11 attacks, along with four co-defendants appeared in a military courtroom at Guantanamo Bay this week for the first time since the coronavirus pandemic began.

The aging Mohammed, now 57 years old, his long beard tinted orange, smiled and gestured with his four co-defendants – all kept outside the courtroom in isolation at the high-security United States prison.

Mustafa Ahmed al-Hawsawi, Ramzi bin al-Shibh, Walid bin Attash, and Abd al-Aziz Ali, and Mohammed face the death penalty in a trial by military tribunal at Guantanamo Bay that has yet to start and remains bogged in process 20 years after the attacks.

The five are accused of war crimes in the September 11 aircraft hijackings that resulted in the deaths of 2,976 people.

A new military judge has been assigned to the trial, previously expected to start in 2022 but now likely to be further delayed as lawyers for the defense prepare to attack the legal foundation of the military commission.

“These proceedings are grotesquely substandard under notions of due process, international law, and … regard for the dignity of human beings,” said Gary Sowards, who took the lead on Mohammed’s defense in 2019.

Mohammed’s legal team would be filing a series of motions designed to challenge the legitimacy of the military commissions and bring to light the CIA’s torture of Mohammed and other detainees, Sowards said on Wednesday.

Indicative of the murky outlook, the new judge, US Air Force Lt Col Matthew McCall, assured lawyers in Guantanamo this week that he has no plans to leave the bench when he becomes eligible to retire in three years.

“I don’t feel the need to rush to try to get this case done on my watch. I’m going to be here,” McCall, now age 50, said this week.

McCall is the fourth judge assigned to the case and is still “trying to get up to speed” on its checkered history, he said.

Human rights advocates say the trial is so fraught with legal obstacles it may never reach a satisfactory conclusion.

“Most families are awaiting justice and the reason they are waiting is that the military commission, and Guantanamo itself, are so fundamentally flawed they cannot provide any semblance of justice,” said Andrea Prasow, deputy director at Human Rights Watch in Washington, DC.

The military commissions at Guantanamo were established by former President George W Bush in 2001 to prosecute detainees accused of organizing the September 11 and other attacks outside the bounds of US criminal law.

The US Navy base at Guantanamo is on the island of Cuba, where inmates do not have most of the protections of US law and where successive administrations have refused to apply international conventions.

Now, proceedings against Mohammed and the four other alleged co-conspirators are enmeshed in a legal nether zone, caught between US military and criminal legal precedents and complicated by the CIA’s torture of the accused.

“The problem is we’ve just created entirely new rules. There’s still debate over questions like does the Constitution and Bill of Rights apply,” said Jonathan Hafetz, a professor at Seton Hall University Law School who has advocated returning the case to US federal courts.

Ongoing government secrecy around the CIA interrogations of the five men, more than 500,000 pages of evidence kept under seal, and the tribunal’s isolated setting at the Guantanamo prison further prevent a fair process.

In 2009, former President Barack Obama promised to close the prison at Guantanamo and then-Attorney General Eric Holder directed the trial of the five September 11 defendants moved to federal court in New York City.

But public backlash and political pressure from Congress forced Obama to back down on the plan to conduct the trial in the US instead of Cuba, and after a two-and-half-year pause, proceedings returned to the military tribunal in Guantanamo.

“The rot at all of it is torture,” said Scott Roehm, director of the Washington, DC, office of the Center for Victims of Torture, a non-governmental advocacy group.

“Guantanamo should never have been stood up in the first place. Its animating philosophy was creating a place outside the reach of the law so that these men can be held for the rest of their lives,” Roehm told Al Jazeera.

In 2014, Obama casually acknowledged in a press conference “we tortured some folks”. In his 2010 memoir Decision Points, Bush said “Damn Right” he approved the use of waterboarding and other interrogation techniques.

A 2014, after a three-year investigation, a US Senate report on the CIA’s post-September 11 programs of detentions and torture in black sites revealed the interrogations of 119 people captured by the US were more brutal than had been previously admitted by US officials.

Mohammed was captured by the US in a covert operation in 2003 and rendered to CIA black sites in Afghanistan and Poland, where he was waterboarded 183 times and sexually attacked, according to his lawyer.

“A terrible crime occurred, but because of the choices of the US government on how to pursue the alleged perpetrators, there’s no glimmer of hope,” Prasow told Al Jazeera.