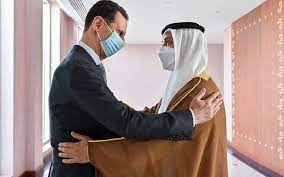 The UAE, a key US ally, has also been strengthening ties with Russia

The US criticised the UAE on Saturday for “legitimizing” Syrian President Bashar al-Assad by becoming first Arab country to host the dictator since the devastating war began.

US State Department spokesman Ned Price said Assad’s surprise trip on Friday had “profoundly disappointed” the US and urged allies to avoid normalising ties with a regime accused of “horrific atrocities”.

“We are profoundly disappointed and troubled by this apparent attempt to legitimise Bashar al-Assad,” who “remains responsible and accountable for the death and suffering of countless Syrians,” Mr Price said.

“We have been clear about this with our partners… (and) we urge states considering engagement with the Assad regime to weigh carefully the horrific atrocities visited by the regime.”

The visit was the latest sign of warming relations between Syria and energy-rich UAE, a key US ally.

It came as Russia, which backs Damascus and also has solid ties with the Emirates, pressed its war on Ukraine.

Like most Arab countries, the UAE broke ties with Damascus in 2012, following the brutal repression of antigovernmental protests and the eruption of civil war.

But it reopened its embassy in the Syrian capital in December 2018, suggesting an effort to bring Assad’s regime back into the Arab fold.

Last year, it called for Syria’s return to the Arab League, which had suspended its membership after the onset of the war.

And in November, the UAE’s top diplomat met Assad in Damascus, a move slammed by the US.