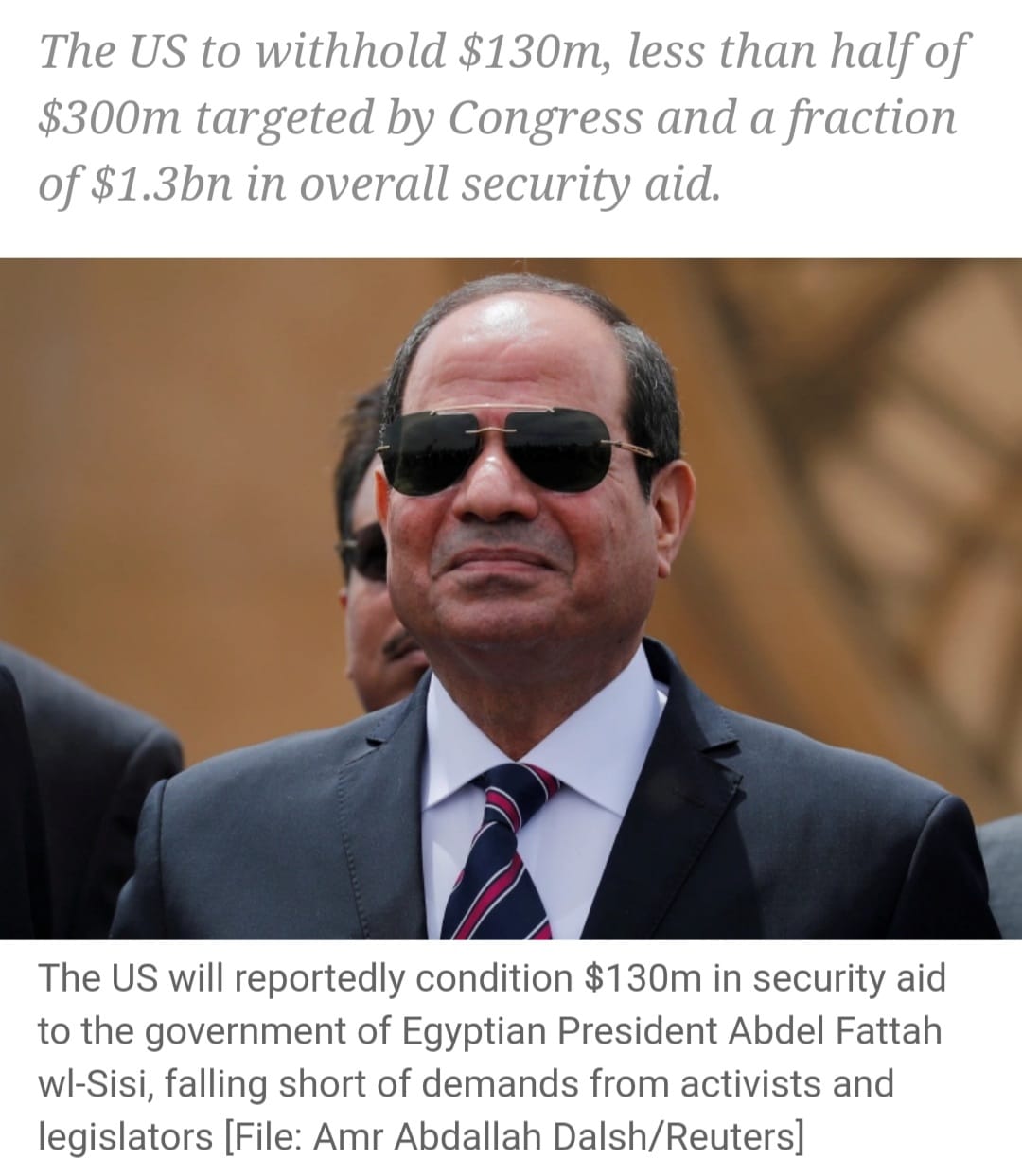 The United States will withhold $130m in security assistance to Egypt this year, releasing the funds only if the government of President Abdel Fattah el-Sisi ends the prosecution of rights and civil society organizations.

Washington also demanded the release of 16 American prisoners in return for the aid, US media reported on Monday.

The decision by the US State Department is an apparent compromise amid calls from Democratic legislators and rights observers for the administration of President Joe Biden to make good on its promise to have a human rights-leading foreign policy and to curtail a portion of the $1.3bn in security aid the US annually provides to Egypt, a country it considers a key ally in the Middle East and North Africa.

While rights groups have called for a complete funding overhaul, Congress has annually passed legislation placing human rights restrictions on $300m of the annual aid, requiring the State Department in recent years to seek a waiver, usually citing national security, to justify releasing the funds.

The Politico news site first reported on the administration’s plan late on Monday with The Washington Post later reporting details of the conditions. Both news organizations cited unnamed US officials.

“This is a mistake. Egypt has 60,000 political prisoners. They torture political dissidents,” Democratic Senator Chris Murphy, who led the pressure campaign to withhold the entire sum targeted by Congress, wrote on Twitter.

“The administration should have held back the full $300m. This half measure sends a muddled message about our commitment to human rights and democracy.”

Speaking to The Washington Post, a US official defended the decision, saying it indicates a break in the previous US policy and sends a message to Cairo. State Department and congressional sources told the newspaper the other $170m of aid designated for restriction by Congress would go towards “counterterrorism”, border security, and to combat arms proliferation.

The Biden administration has not yet officially responded to the news reports.

Seth Binder, director of advocacy at the Washington, DC-based Project on Middle East Democracy, noted the Biden administration’s decision fell short of even actions taken by the former administration of President Donald Trump in 2017 to condition $195m in aid to Egypt.

“When put in the same position four years ago, the Trump administration was stronger on human rights in Egypt,” Binder tweeted, noting the move was spurred by the crackdown on non-governmental organizations (NGOs) operating in the country.

The Trump administration later released the funds saying Egypt “has taken steps over the last year in response to specific US concerns”. The administration did not withhold further funds during Trump’s four years in office, with Trump once infamously referring to el-Sisi as his “favorite dictator”.

Signaling a break from his predecessor, Biden previously declared “no more blank cheques” for el-Sisi, who came to power in a 2013 military coup that overthrew President Mohamed Morsi.

International observers – including the US State Department –  have repeatedly accused el-Sisi of crackdowns on freedom of expression, extrajudicial killings, arbitrary detention, and forced disappearances.

The government has also been accused of using the controversial “Case 173” judicial process to regularly crackdown on NGOs accused of receiving foreign funds to destabilize the government.

Still, the Egyptian leader found an early opportunity to prove himself useful to the Biden administration, serving as mediator during a deadly escalation between Israel and Palestine in May.

Biden administration officials have since praised the “strategic” and “constructive” partnership with Egypt, once considered the cornerstone of US policy in the region given its influence in the Arab world, its land border with the Gaza Strip, and its control of the Suez Canal.

A meeting on Monday between el-Sisi and Israeli Prime Minister Naftali Bennett at Sharm El-Sheikh – the first public meeting between the leaders of the neighboring countries in more than 10 years – has been seen as a further coup for US-Egypt relations.

In conditioning, only a portion of the US aid, Sarah Leah Whitson, the executive director of Democracy for the Arab World Now (DAWN), accused the Biden administration of dodging a more substantial relationship reset.

“Partially ‘conditioning’ military aid to #Egypt is a failed strategy, going on decades now,” she wrote on Twitter. “Successive administrations always find a way to bait and switch, while avoiding a fundamental challenge as to why we give one cent of aid to this brutal government.”

Critics have also said the reported conditions on the $130m are not wide-ranging enough.

“Just like Saudi Crown Prince Mohammed bin Salman, President Sisi has all the reassurance he needs that not much is going to change from this new administration,” said Hursh.

Note: Every article published on this section is extracted from several most genuine authentic sources on our daily life which brings us qualitative LR&A honors the spirit of Journalism of these global giants of News Broadcasting across the globe and outer space, some of them Are, HUFFPOST, Aljazeera, New York Times, CNBC, wall street journals, Reuters, google news, Wikipedia, the Hindu, USA Today, Financial Times, Times Magazines, United Nation Journals, BBC, National Geographic, animal planet, History Tv, Fox network etc. Legal research & Analysis recommends all users kindly do read the original contents published by these mainstream media giants, simply click the link of the headline of the post you want to read also share with your friends quality information do not pay attention to unverified sources of News, fake news, news that can cause harm public at large are considered as fake news, LRA promotes the awareness regarding the spreading of fake news, or news without any genuine source of platform, kindly follow the instruction and help community flourished.