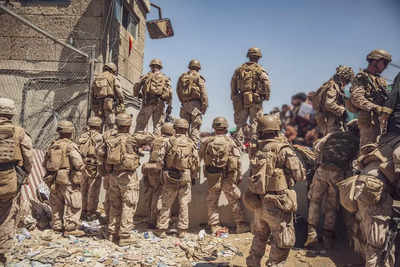 Before leaving Afghanistan, the US military disabled 73 military aircraft, weapons systems, choppers and armoured vehicles at the Kabul airport hangar.

The US troops made their final exit from Afghanistan late on Monday night in a hasty retreat after 20 years of war that turned out to be America’s longest. Before leaving, the US military disabled a number of their choppers and armored vehicles at the Kabul airport hangar.

A video shared by a journalist on Twitter shows how the Taliban fighters entered the hangar soon after the US forces exited the country in their final flight out of Kabul.

In the video, the Taliban fighters are seen examining the Chinook helicopters left behind by the US military. However, according to an AFP report, the US military has disabled scores of aircraft and armored vehicles and a high-tech rocket defense system, before leaving the Kabul airport.

Central Command head General Kenneth McKenzie said 73 aircraft that were already at Hamid Karzai International Airport in Kabul were “demilitarized” or rendered useless by the US troops before they wrapped up the two-week evacuation.

The weapon systems used just hours earlier to counter Islamic State rockets launched toward the Kabul airport were kept operational until “the very last minute” as the final US military aircraft flew out, said reports. One of the last things US troops did was to make the so-called C-RAMS (Counter Rocket, Artillery, and Mortar System) inoperable.

McKenzie said they “demilitarized” the system so it can never be used again. Officials said troops did not blow up the equipment in order to ensure they left the airport workable for future flights, once those begin again. In addition, the American soldiers also disabled 27 Humvees and 73 aircraft so they can never be used again.

The US soldiers have left behind around 70 MRAP armored tactical vehicles — which can cost up to $1 million apiece.

Throughout the day, as the final C-17 transport planes prepared to take off, McKenzie said the US kept “overwhelming US airpower overhead” to deal with potential Islamic State threats.