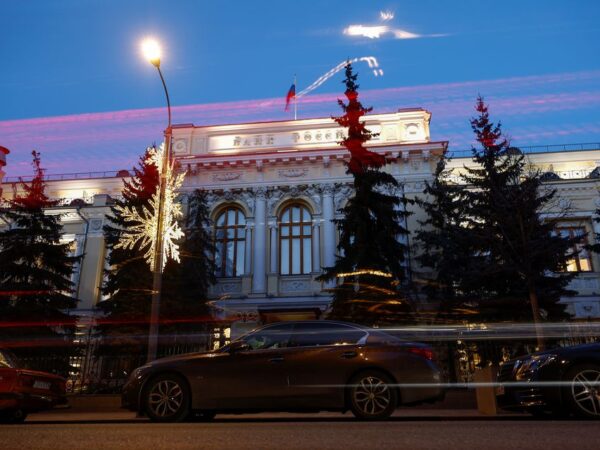 NEW YORK/LONDON, Feb 28 (Reuters) – The Russian ruble hit record lows on Monday while world stocks slid and oil prices jumped after the West ramped up sanctions against Moscow over its invasion of Ukraine, including blocking Russian banks from the SWIFT global payments system.

Feb 28 (Reuters) – Russia’s central bank more than doubled its key policy rate on Monday and introduced some capital controls as the country faced deepening economic isolation, but its governor said sanctions had stopped it from selling foreign currency to prop up the rouble. The admission that restrictions had effectively tied the Bank of Russia’s hands underscores the ferocity of the backlash to Moscow’s invasion of Ukraine and Western allies’ success in restricting its ability to deploy some $640 billion of foreign exchange and gold reserves.”The central bank today increased its key rate to 20% as new sanctions triggered a significant deviation of the rouble rate and limited the central bank’s options to use its gold and foreign exchange reserves,” Governor Elvira Nabiullina told a news conference.

“We had to increase rates to compensate citizens for increased inflationary risks.”

Western sanctions had earlier sent the rouble tumbling nearly 30% to record lows. It clawed back some ground after the central bank raised its main interest rate to 20%, the highest level this century, from 9.5%. read more

The Bank of Russia sold $1 billion on foreign exchange markets on Thursday, Nabiullina said, but did not intervene on Monday.

That suggests the rouble was supported by other unnamed market participants.

Russia’s central bank also said that stocks and derivatives trading on the Moscow Exchange will remain closed for a second day on Tuesday. Russian stock markets and derivatives markets were closed on Monday to gird against further losses. read more

On Monday, the central bank and the finance ministry ordered exporting companies, which include some of the world’s biggest energy producers from Gazprom to Rosneft, to sell 80% of their forex revenues on the market, as the central bank’s own ability to intervene on currency markets was curbed.

Dmitry Polevoy, head of investment at Locko Invest, estimated that Russian exporters could offer $44 billion-$48 billion per month to support the rouble provided oil prices stayed around current levels and there were no sanctions on energy exports.

“This looks sufficient to stabilise the market in the next couple of weeks,” he said.

The central bank temporarily banned Russian brokers from selling securities held by foreigners, although it did not specify assets for which the ban applies. It also said it would resume buying gold on the domestic market. read more

Russian President Vladimir Putin ordered a ban on foreign exchange loans and bank transfers by Russian residents the outside of Russia from March 1, the Kremlin said on Monday, in retaliation for economic sanctions imposed on Moscow by the West.

The United States and Britain banned their citizens or entities from transacting with the central bank, Russia’s National Wealth Fund or the Russian finance ministry. read more

Switzerland said it would adopt European Union sanctions against Russians involved in the invasion of Ukraine and freeze their assets, in a major departure from the neutral country’s traditions. read more

“If Russia continues on its current path, it is quite easy to see how the latest sanctions could be just the first steps in a severe and enduring severing of Russia’s financial and economic ties with the rest of the world,” wrote Oliver Allen of Capital Economics in a report.

Russia’s major banks have also been excluded from the SWIFT messaging network that facilitates trillions of dollars worth of financial transactions worldwide, making it hard for lenders and companies to make and receive payments. read more

Nabiullina said Russia had an internal replacement for SWIFT to which foreign counterparties would be able to connect, but did not give details.

She said the banking sector faces “a structural deficit of liquidity” because of the high demand for cash, and that the central bank was ready to support it.

“The central bank will be flexible to use any tools needed … banks have enough coverage to raise funding from the central bank,” Nabiullina said.

Russians had queued outside ATMs on Sunday, worried the sanctions could trigger cash shortages and disrupt payments.

All banks would fulfill their obligations and funds in their accounts are safe, Nabiullina said, although the central bank was recommending that banks restructure some clients’ loans.

The European arm of Sberbank (SBER.MM), Russia’s biggest lender, was set to fail, the European Central Bank warned on Monday, after a run on its deposits sparked by the backlash from Russia’s invasion of Ukraine. read more

Nabiullina said further monetary policy decisions would be driven by the central banks’ assessment of external risks, adding that it would be flexible in its decisions given the “non-standard situation” faced by the financial system and economy.

The rouble finished trading down around 14% to the U.S. dollar.

The Institute of International Finance (IIF), a trade group representing large banks, warned on Monday that Russia was extremely likely to default on its external debts and its economy will suffer a double-digit contraction this year after the fresh reprisal measures by the West.

The central bank and finance ministry did not immediately respond to a Reuters request for comment on the IIF assessment.

An order that Russian brokerages reject sell orders for Russian securities from foreign clients could complicate plans by the sovereign wealth funds of Norway and Australia to wind down exposure to Russian-listed companies. read more

It was also unclear how energy major BP Plc, Russia’s biggest foreign investor, would follow through on a decision to abandon its stake in the state oil company Rosneft (ROSN.MM) at a cost of up to $25 billion. read more

Global bank HSBC and the world’s biggest aircraft leasing firm, AerCap, are among other Western firms looking to exit Russia over its actions in Ukraine, which Moscow characterizes as a “special operation.” read more

UK-listed depositary shares of Russian companies plummeted, including those of gas giant Gazprom and Sberbank.

“We are witnessing prices for Russian ADRs that we haven’t seen for literally decades,” said Michael Kart, a partner at investment firm VLG Capital. “This is certainly the most devastating hit ever taken by the Russian securities market.”