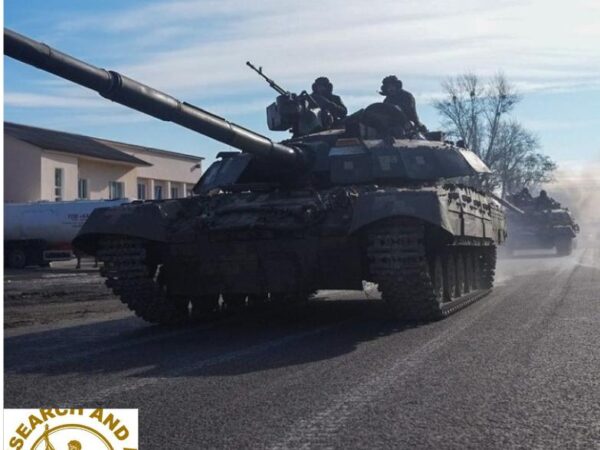 Russian troops advanced towards the capital on Friday morning, and the world awoke to news of the “insidious shelling of Kyiv”.

Ukrainian guards fired warning shots to prevent a stampede at Kyiv’s central railway station, as thousands of people tried to force their way onto evacuation trains. As Russians approached Kyiv from the northeast and east, fears increased that it would fall on the second day of the attack. The Ukrainian government told its citizens to prepare homemade defenses, including Molotov cocktails, and enlist in the armed forces if they are able.

Ukrainian guards fired warning shots to prevent a stampede at Kyiv’s central railway station, as thousands of people tried to force their way onto evacuation trains.

As Russians approached Kyiv from the northeast and east, fears increased that it would fall on the second day of the attack.

The Ukrainian government told its citizens to prepare homemade defenses, including Molotov cocktails, and enlist in the armed forces if they are able.

A dead man in civilian clothes lay sprawled on the sidewalk of a residential neighborhood in northern Kyiv. Pedestrians ran for safety as small arms fire and explosions erupted in the Obolensky district in the city’s north.

Blasts were heard in the city center, where residents have been sheltering indoors.

Putin’s forces have continued a major assault on Ukrainian cities on Friday morning.

Ivankiv (11 am)
The Ukrainian army said it had blown up a bridge over the Teteriv river at Ivankiv, 50 miles north of Kyiv, to slow the Russian advance to the capital.​

Placeholder image for the youtube video: 7KRDQBjUxYo
Chernigiv (10:30am)
Russian soldiers tried to “bypass” the northern city of Chernigiv, where they were “rebuffed” by the Ukrainian army, in order to attack Kyiv, the Ukrainian army.

The city, which is roughly 90 miles from the capital, was the site of “heavy fighting” where there were numerous casualties, Ukraine’s President said.

Today at 10:30 am at the entrances to Chernihiv, Hostomel, and Melitopol there was heavy fighting. People died. Next time I’ll try to move the war schedule to talk to #MarioDraghi at a specific time. Meanwhile, Ukraine continues to fight for its people.

— Володимир Зеленський (@ZelenskyyUa) February 25, 2022
Dymer (6.30am)
The Ukrainian army said it was fighting Russian forces north of the capital in the village of Dymer, around 28 miles from Kyiv.

A video circulating on social media shows what appears to be Russian troops disembarking a military vehicle carrying guns. The clip was filmed by a resident peering out of a house window just meters away.

Chernobyl (1 am)
The Ministry of Defence (MoD) says it is “highly likely” Russian forces have captured the Chernobyl nuclear power plant.

A statement from the MoD said: “Russian forces have highly likely captured the Chernobyl nuclear power plant. Workers have reportedly been detained by Russian troops.

In an intelligence update just after 1 am, the MoD also said it is “unlikely” Russia achieved its planned objectives for the first day of its military action in Ukraine.

“Fighting probably continues on the outskirts of the city.

“It is unlikely that Russia has achieved its planned Day 1 military objectives. Ukrainian forces have presented fierce resistance across all axes of Russia’s advance.”

Snake Island (12am)
In the early hours of Friday morning, a small island in the black sea 30 miles off the coast of Ukraine was targeted by Russian troops.

Many have pointed out Snake Island’s territorial significance, as it is close to the coast of EU member state Romania.

— Christopher Miller (@ChristopherJM) February 24, 2022
The airport, which is geographically significant because it is 15 minutes from the capital, is Ukraine’s most important international cargo airport and a key military airbase.

The fighting began on Thursday morning, with some 20 Russian helicopters and aircraft dropping paratroopers that then fought to secure the airfield.

The BBC reported that one Russian military helicopter was downed during the fighting.

Chernobyl (3 pm)
Russian troops try to seize the Chernobyl plant in the afternoon, according to Ukraine’s president.

Shortly after 5 pm, it was confirmed that Russian troops had seized the radioactive plant of Ukraine.

The site of the 1986 nuclear disaster has become the latest target of the Russian military, which Volodymyr Zelensky said marks “a declaration of war on all of Europe”.”Russian occupying forces are trying to take over the Chernobyl Nuclear Power Plant. Our soldiers are giving their lives so that the tragedy of 1986 does not happen again,” Mr. Zelensky wrote on Twitter, referring to the date of the disaster.

The Chernobyl exclusion zone, which is on the border with Belarus, offers a short, direct route to Kyiv

Just think what could happen to all of Europe if Chernobyl gets destroyed in the fighting https://t.co/4ewBjbR95g

— max Seddon (@maxseddon) February 24, 2022
Concerns have been raised about what the impact of fighting around the radioactive zone could have on the rest of Europe.

Kakhovka (12 pm)
At around lunchtime on Thursday, Russian troops entered the southeastern city of Kakhovka.

Videos show Russian helicopters and tanks traveling through the city onto the Dnieper river, and troops raising the Russian flag over the hydroelectric power plant.

According to reports, the Ukrainian authorities in the region now recognize that parts of the province are no longer under government control.

Odesa (11 am)
In the southern city of Odesa, 18 people were killed as a result of a missile attack on a military base near Ukraine’s Black Sea port, regional authorities said.

“Eighteen died – eight men and 10 women. At the moment, we are still digging through the rubble,” the Odessa regional administration said in a statement.

It was the deadliest single strike so far of the day reported by Ukrainian officials, who had earlier put the death toll across the country at around 50, including about 10 civilians.

At least two people were killed, according to Amnesty International, whereas other reports suggest that the death toll could be as high as four fatalities and 10 injuries, including doctors.

Uman (6:30 am)
Disturbing footage emerged from the eastern town of Uman, where a civilian riding a bicycle was hit and killed by Russian artillery.

The attack was caught by a private CCTV camera, which showed the missile making direct contact with the cyclist.

Graphic videos quickly started to emerge on social media of the aftermath of the bombing showing the cyclist’s lifeless body on the road.

Ivano-Frankivsk (6 am)
Earlier in the day, another airfield was targeted by the Russian military, this time in the western city of Ivano-Frankivsk.

Videos circulating online, as seen below, show a missile hitting the airport followed by a large explosion and billowing black smoke.

Wow. Video of a missile hitting an airport, reportedly in Ivano-Frankivsk in western Ukraine. The geographic scale of this thing is crazy pic.twitter.com/odhvqin77Y

— Alec Luhn (@ASLuhn) February 24, 2022
The main directorate of the State Emergency Service in the Ivano-Frankivsk region confirmed that the airport had been destroyed, according to reports.