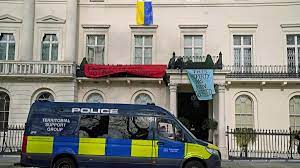 Police sent to Belgravia house owned by Oleg Deripaska, an industrialist with close links to the British political establishment

Squatters broke into the central London mansion owned by oligarch Oleg Deripaska and declared that it “belongs to Ukrainian refugees“.

Dozens of riot police were sent to the Belgrave Square property, armed with a JCB, but protesters remained on the balcony on Monday night.

Mr. Deripaska, an industrialist who has had close links with the British political establishment, was targeted with sanctions by the UK Government last week.

On Monday night he accused the Government of colluding with people who raided his home and said the UK was failing to uphold basic laws of private property.

When he was sanctioned, Mr Deripaska was described as “a prominent Russian businessman and pro-Kremlin oligarch” who is “closely associated” with the Russian government and Vladimir Putin.

His wealth is estimated to be £2.3 billion and he has a multimillion-pound property portfolio in the UK which, according to a 2007 High Court judgment, includes the house at 5 Belgrave Square. Records indicate that it has not changed hands since and is owned by an offshore British Virgin Islands company.

Video posted online by the protesters showed the lavish interior of the £50 million mansion, including chandeliers, a grand piano and a home cinema. It also features a Turkish steam bath, gym and two kitchens.

Artwork estimated to cost hundreds of thousands of pounds was hung on the walls of the six-story property.

The squatters call themselves the London Mahknovists after Nestor Makhno, who led an anarchist force that attempted to form a stateless society in Ukraine during the Russian Revolution of 1917-1923. They said on Monday afternoon that they have “made their peace with getting arrested”.

After breaking in overnight, three men stood on the balcony above the street in the day, playing music, waving and dancing next to signs which read: “This property has been liberated” and “Putin go f— yourself”. They all wore dark clothes and face coverings.

“We stay here until Putin stops the war,” one man said. “We have opened the building to house Ukrainian refugees and refugees from all nations.”

He also said the owner of the building “wants to destroy Ukraine homes”, adding: “He supported the wars. This home belongs to Ukrainian refugees. There are families dying. Their land has gone. This is the least we can do.”

Police remained at the scene, where four protesters had been surrounded by officers on the balcony. Officers wearing harnesses first tried to deploy a ladder to access the balcony but, after the squatters sat in the way to obstruct them, a JCB crane was moved in to lift them up instead.

Officers wearing riot gear used a drill to break open the front door and enter the house. An officer claimed the house had been ransacked and chairs and a chandelier smashed.

The demonstrators refused to leave, sipping whisky and ice tea and taunting police by singing The Time of My Life. Two arrests were made when several protesters tried to climb the back of the building, which is the Romanian consulate.

A Metropolitan Police statement said: “Police were called shortly after 01.00 hours on Monday 14 March to a residential property in Belgrave Square, SW1. Officers attended and found that a number of people had gained entry and hung banners from upstairs windows.”

On Monday night, Sadiq Khan, the London Mayor, said he was “surprised” that officers intervened, adding that it was “unclear what the police were responding to”.

Speaking to LBC, he said he did not “condone” the actions of the squatters but questioned whether the police move against them had been “proportionate”.

Boris Johnson’s spokesman said on Monday that “we are working to identify the appropriate use for seized property while owners are subject to sanctions”.

In 2007, a High Court judgement said Deripaska “beneficially owns” the house in the upmarket Belgravia area, near Hyde Park and Queen Elizabeth II’s Buckingham Palace. But he is not listed on UK Land Registry records.

Instead, the owners are listed as Ravellot Limited, based in the British Virgin Islands, managed by Graham Bonham Carter at the same address and a nearby property.

On March 4, the National Crime Agency said it had secured two account-freezing orders in respect of five bank accounts held by Bonham Carter, a British businessman.

“The orders were obtained on the basis that there are reasonable grounds to suspect that the money in the accounts was derived from the laundering of funds of an individual subject to sanctions in the United States, namely Oleg Deripaska,” it said in a statement. The accounts contain funds of a value totalling approximately £110,000.”