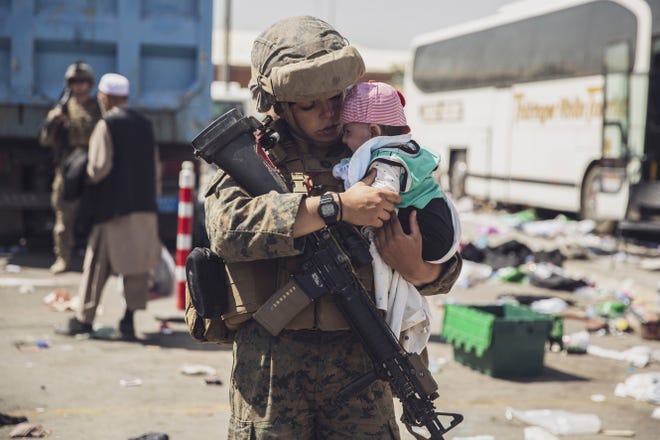 The 2001 US invasion was bound to devastate the country and the Afghan people.

Much has been said in the past few weeks about the sudden takeover of Afghanistan by the Taliban. For all the money spent and blood spilled by the United States, at the end of it all, the corrupt government that was in place garnered so little support that it fell without so much as a whimper.

The “expert analysis” from the Western side seems to miss the central reason for his debacle. But one of my clients in Guantánamo, Sanad al-Kazimi, readily identified it in a recent conversation with me. Few have more reason to regret the invasion of Afghanistan in October 2001 than he does, as he has suffered for 16 years without charge or trial.

He said he thought President Joe Biden had spoken with wisdom in defending the decision to end the longest war in US history. He reminded me that the Arabs also have the saying, “Better late than never.” But Sanad went on to say he would prefer to move the aphorism one step onwards: “It is often better to be never.” It would have been better never to have invaded Afghanistan in the first place.

Just before the pandemic, I was in Kabul to gather support for Asadullah Haroon, an Afghan who has languished in Guantánamo for the past 14 years. I talked to people from every side of the chaotic political scene. If there was one thing on which everyone could agree, it was that nobody wanted the invaders to remain. Indeed, they did not want them in the first place.

Yet the US invasion happened in 2001. It was always going to be difficult to turn a killing field into anything more than a cemetery. There are few examples in history where the military invaded a country (labeled “the enemy”) and then turned it into a respected friend.

A rare instance might be the Allied response at the end of World War II. The Germans had committed the most horrific crimes imaginable (the Taliban could never match them, even in a Western neocons’ wildest dreams), the US gave a tiny group of Nazis a fair trial and acquitted a number of them. Then, through the Marshall Plan, the US gave huge sums – more than $100bn in today’s money – to help rebuild Europe, extending this generosity of spirit to West Germany.

It would have taken an extraordinary effort to create a political structure in Afghanistan that could have sloughed off the smell of the foreign imposition, and survived the withdrawal of the US military. It would have taken a truly humane attitude. And that is what we never showed.

First, we responded to al-Qaeda atrocities by torturing prisoners and sending others half way around the world to Guantánamo. Then we spent a lot more money on bombs than we did on reconstructing the damage they did. Third, we never even pretended to treat the Afghans as equal partners.

In Kabul, I had dinner at the house of Hajji Din Mohammed, an elderly man who had held various positions in government. He had fought against the Russians and with the Americans. I asked him to compare the two. With reference to the Russians, he showed me where they had shot him, and described their phenomenal cruelty.

But he said he respected them in two ways: first, they were intensely loyal to their fellow soldiers, rushing to their aid no matter what the odds. And second, when they were ultimately expelled from Afghanistan, the Russians were loyal to those who had helped them, welcoming them to Moscow. Indeed, he pointed out another person at our dinner who had got all his education at Russian expense.

I asked him about my fellow Americans. He was understandably loath to be rude, but I begged his true opinion.

“The Americans were never even loyal to themselves,” he said. “If their soldiers were pinned down by the Taliban, they had to get some edict from Washington before anyone would help them.”

But then he went on to describe how the Americans treated the Afghans. In an ironic twist of racism, no Afghan citizen was allowed to book a room in the heavily fortified hotel where I was staying, and while I could enter without being searched, my host could not. But more to the point, he said, based on his flowing beard and his battle-scars, the Americans regarded him as a deranged “jihadi”. “No American has shaken my hand as a friend in the past 18 years,” he concluded.

I had already decided that I liked and respected this man, and I was horrified when I heard his words. I immediately asked whether I (as an American) could please shake his hand as a friend. He burst into tears and declared me a blood brother. I would be honored to be Hajji Din Mohammed’s brother. And so should all Americans. It is just sad that we did not get around to it.

Instead, while we did at least insist on the rights of women, we imported a sense of imperial racism that was redolent of the First Anglo-Afghan War. We rendered life prohibitively expensive without enhancing the wealth of the people (when I wanted to set up a branch of our NGO, it would have cost four times as much in Kabul as it would in Islamabad). And we set up a government that was so legendarily venal and corrupt that the US military referred to it as the V I C E – “Vertically Integrated Criminal Entity”.

Is it surprising that Afghans did not want to indulge in yet another civil war to preserve what we had offered them?

My father was a rampant chauvinist and homophobe; we did not hate him for it; with evolving success, we attempted to change his mind. I have tried many capital cases in America where, to qualify for service, all 12 jurors have to promise they are willing to impose the death penalty. We could argue with them and tell them they were wrong, or we could speak their language and remind them of the Bible teaching, “Blessed are the merciful, for they shall receive mercy.” I found the second course to be much more effective.

We had the same choice when we first visited our conservative Muslim clients in Guantánamo: we could chastise them for the chauvinism they learned in a rural village in Afghanistan and label them “terrorists”. Or we could seek out the best in them. Today, I count my Guantánamo clients among my best friends on the planet. One of them, Asadullah Haroon, wants nothing more than for his 14-year-old daughter Maryam to benefit from a full education.

We have that same choice with the new Afghan government. The US media has already begun vilifying them. For example, as the New York Times reports, Gholam Rulani was detained “in Afghanistan in 2001 with his brother-in-law Abdul Haq Wasiq, a deputy minister of intelligence, after he accompanied Mr. Wasiq to a negotiating meeting with US officials. He was brought to Guantánamo the day the prison opened, on January 11, 2002, and was repatriated in December 2007.”

Now, we are told that Mr. Rulani, who led a group of Taliban who entered the presidential palace on August 15, said to one of his abusive Guantánamo guards “we will get you on the outside”. That someone being grotesquely mistreated may (or may not) have blurted something like this out to his abuser 15 years ago is hardly surprising. What I can say is that I have a good relationship with my erstwhile clients, and they will gladly engage with an American like me, who stood up for their rights in Guantánamo.

Rather than shout from afar that they are barbarians, it will be more productive to sit down with them, and help them rebuild the country, while strongly supporting Asad when he encourages Maryam’s dream to become a doctor.