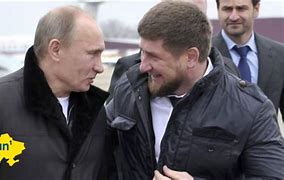 Who is Ramzan Kadyrov, the brutal Chechen leader claiming to be in Ukraine? His militia has a fearsome reputation, but seems to have suffered losses.

In a video posted online on March 13th, Ramzan Kadyrov appears to be discussing tactics with his soldiers. The leader of the Chechen Republic, a predominantly Muslim region in Russia’s North Caucasus, stands in front of a Chechen flag adorned with an illustration of his father, Akhmad. According to Mr Kadyrov it was filmed in Hostomel, less than 30km from Kyiv, Ukraine’s capital. This has not been independently verified, but there have been several confirmed reports of Chechen fighters in Ukraine. Chechnya and the rest of Russia have a long, complicated and often violent history; after the collapse of the Soviet Union, Russia waged two brutal wars to keep Chechnya from becoming independent. But Chechen forces are now supporting Vladimir Putin, Russia’s president, in another bloody conflict, this time to keep Ukraine under Russia’s sway. And on March 15th Mr Kadyrov clashed online with Elon Musk, an outspoken American billionaire, when he warned him not to challenge Mr Putin. How did Mr. Kadyrov go from fighting against Russia to fighting for it, and what role will Chechen fighters play in Ukraine?

Russian tsars waged protracted campaigns to conquer the North Caucasus in the 19th century. After the October Revolution of 1917, Chechnya and its neighbours declared independence (as did Ukraine around the same time). Bolshevik forces eventually retook the region. When the Soviet Union collapsed, Chechen nationalists, the elder Kadyrov among them, moved again to break away from Moscow. In 1994, Boris Yeltsin, Russia’s president, launched the first Chechen war, a bloody attempt to regain control of the territory; it ended in 1996 with Chechnya’s de facto independence intact. Three years later, Russia started another war, this time with Mr. Putin at the helm, promising to “waste them in the outhouse” (like Mr. Putin’s war in Ukraine, it was not officially called a war, but rather a “counter-terrorism operation”). Mr. Putin received a helping hand from Kadyrov, a Sufi Muslim who had come to see siding with Russia as the only way to eradicate the Islamic fundamentalism gaining traction in the region. Mr Putin placed Kadyrov in charge of the region in 2003, but he was assassinated less than a year later. Ramzan, then just 27 years old, quickly took power.

The younger Mr. Kadyrov consolidated his rule by brutally suppressing internal rivals. Generous subsidies from Moscow fueled both Chechnya’s reconstruction and Mr. Kadyrov lavish lifestyle. He now runs the region as his personal fief, with tens of thousands of troops known as Kadyrovtsy under his command. In 2017 he was placed under sanctions by America for human-rights abuses including the kidnapping, torture and murder of LGBT Chechens. He remains loyal to Mr. Putin and often sports T-shirts bearing the Russian leader’s face. His forces have helped Mr. Putin fight earlier wars in Georgia in 2008 and in eastern Ukraine in 2014. Yet theirs is a co-dependence, and Mr Kadyrov has long-standing tensions with Russia’s security services that make his role on the battlefield unpredictable.

Whether or not Mr Kadyrov is in Ukraine, his forces already are. In recent weeks images circulated of Mr Kadyrov apparently addressing thousands of fighters in Grozny, the Chechen capital, and of Chechens apparently in Ukraine praying in the forest before battle. But Mr Kadyrov’s men appear to have fared no better than the rest of the Russian forces. A video apparently taken shortly after the start of the invasion appears to show a scorched convoy of tanks and armoured personnel carriers. According to reports this was an attack by Ukraine on a column of Chechen forces in which 70 of their soldiers died. Their utility for Mr Putin in a war that he may not be able to win has so far been limited.

Surprise
0 0 %
current affairs Tags:but seems to have suffered losses., Ramzan Kadyrov, the brutal Chechen leader claiming to be in Ukraine? His militia has a fearsome reputation, Who is Ramzan Kadyrov