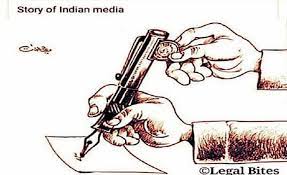 Why we need to Avoid watching too much of breaking news & panel discussions on Indian TV news channels now a days!? Because, they all follow Zohnerism!

What is this notorious concept of Zohnerism?

Zohnerism – is all about twisting of simple facts to confuse people!
To know more about it, please read this:

In 1997, 14-year-old Nathan Zohner presented his science fair project to his classmates, seeking to ban a highly toxic chemical from its everyday use.

The chemical in question? Dihydrogen monoxide.

Throughout his presentation, Zohner provided his audience scientifically correct evidence as to why this chemical should be banned.

He explained that dihydrogen monoxide:

—–Causes severe burns while it’s in gas form.
—–Corrodes and rusts metal.
—–Kills countless amounts of people annually.
—–Is commonly found in tumors, acid rain etc.
—–Causes excessive urination and bloating if consumed.
—–Zohner also noted that the chemical is able to kill you if you depend on it and then experience an extended withdrawal.

He then asked his classmates if they actually wanted to ban dihydrogen monoxide.

And so, 43 out of the 50 children present voted to ban this clearly toxic chemical.

However… this chemical isn’t typically considered toxic at all.

In fact, dihydrogen monoxide is simply H2O, which is nothing but water.

Nathan Zohner’s experiment wasn’t a legitimate attempt to ban water, but instead an experiment to get a representation of how gullible people can really be.

Also, all of the points that Zohner used to convey his point were 100% factually correct; he just skewed all of the information in his favour by omitting certain facts.

In recognition of his experiment, “I’ve mortally offended Putin by surviving”: why Alexei Navalny keeps fightingjournalist James K. Glassman coined the term “Zohnerism” to refer to “the use of a true fact to lead a scientifically and mathematically ignorant public to a false conclusion“.

And this occurs a lot more often than you think, especially when politicians, conspiracy theorists, etc., use proven facts to persuade people into believing false claims.

The fact that people can mislead, and be misled so easily, is highly unsettling.

A very meaningful, sensible write-up that applies to today’s world more than anytime before.