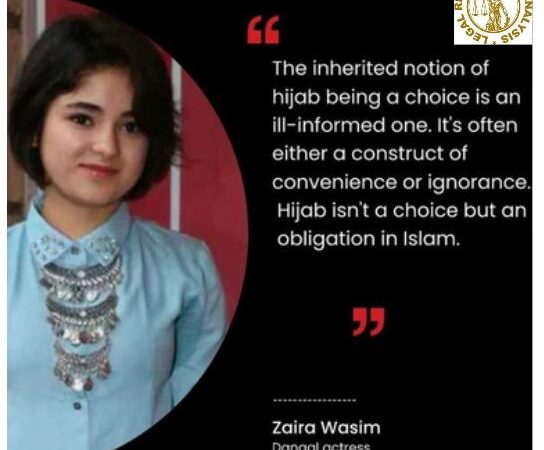 Zaira Wasim reacts to hijab row: ‘I, as a woman who wears a hijab, resent this entire system’

Zaira Wasim reacts to hijab row: ‘I, as a woman who wears a hijab, resent this entire system’
Actor Zaira Wasim, best known for her debut film Dangal, has reacted to Karnataka’s hijab controversy, calling the ban on hijab in colleges unjust for women.
Actor Zaira Wasim is the latest celebrity to speak her piece on the ongoing hijab row in Karnataka. The actor took to Facebook on Saturday to share a long post criticizing the ban on hijab in Karnataka schools, calling it unjust.

The hijab row began on January 1 when six female Muslim students at Government PU College in Udupi claimed they weren’t allowed to enter their college wearing hijab. They started a protest against the college authorities, which transformed into a statewide issue across Karnataka. The matter is currently in the Karnataka High Court.

Zaira weighed in on the controversy in her Facebook post. As she called wearing the hijab “fulfilling an obligation enjoined upon her by the God,” Zaira said, “I, as a woman who wears the hijab, with gratitude and humility, resent and resist this entire system where women are being stopped and harassed for merely carrying out a religious commitment.”

The actor added that she found Muslim girls having to choose between hijab and their education unjust. “Stacking this bias against Muslim women and setting up systems where they should have to decide between education and hijab or to give up either is an absolute injustice. You’re attempting to compel them to make a very specific choice that feeds your agenda and then criticizing them while they’re imprisoned in what you’ve constructed,” she further wrote.

Zaira made her Bollywood debut at the age of 16 with Aamir Khan-starrer Dangal. She went on to star in two movies after that–Secret Superstar and The Sky is Pink–but then retired from acting in 2019 at the age of 18. Talking about the decision, she stated that her acting career conflicted with her religious beliefs and faith