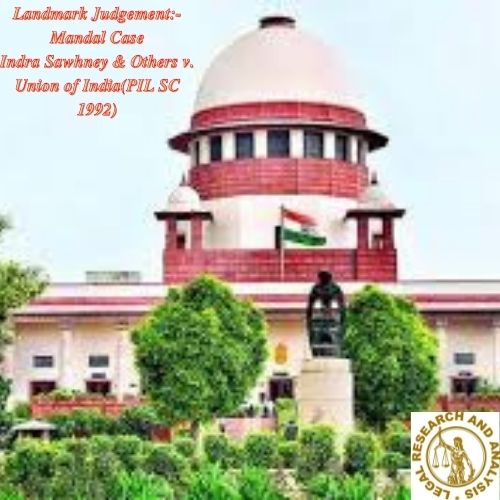 Facts:- The constitution recognized social and educational backwardness, but not economic backwardness. The court upheld separate reservations for OBC in central government jobs but excluded these to the “creamy layer” (the forward section of a backward class, above a certain income).[4][unreliable source? At no point should the reservation exceed 50%.

The genesis of the debate was in 1980, when the Second Backward Classes Committee, headed by BP Mandal, submitted its report. The report recommended 27 percent reservation for Other Backward Classes (OBCs) and 22.5 percent for the Scheduled Castes/Scheduled Tribes.

The Central government, however, acted on the report a decade later, by issuing an office memorandum (OM), providing 27 percent of vacancies for Socially and Educationally Backward Classes to be filled by direct recruitment.

Indra Sawhney, the petitioner, in this case, made three principal arguments against the Order:

The extension of reservation violated the Constitutional guarantee of equality of opportunity.
Caste was not a reliable indicator of backwardness. The efficiency of public institutions was at risk.

The five-judge Bench of the Supreme Court issued a stay on the operation of the Government Order of 13 August till the final disposal of the case.

Judgment:- On 16 November 1992, the Supreme Court, in its verdict, upheld the government order, being of the opinion that caste was an acceptable indicator of backwardness. Thus, the recommendation of reservations for OBCs in central government services was finally implemented in 1992.

1992 Indra Sawhney & Others v. Union of India judgment laid down the limits of the state’s powers: it upheld the ceiling of 50 percent quotas, emphasized the concept of “social backwardness”, and prescribed 11 indicators to ascertain backwardness.