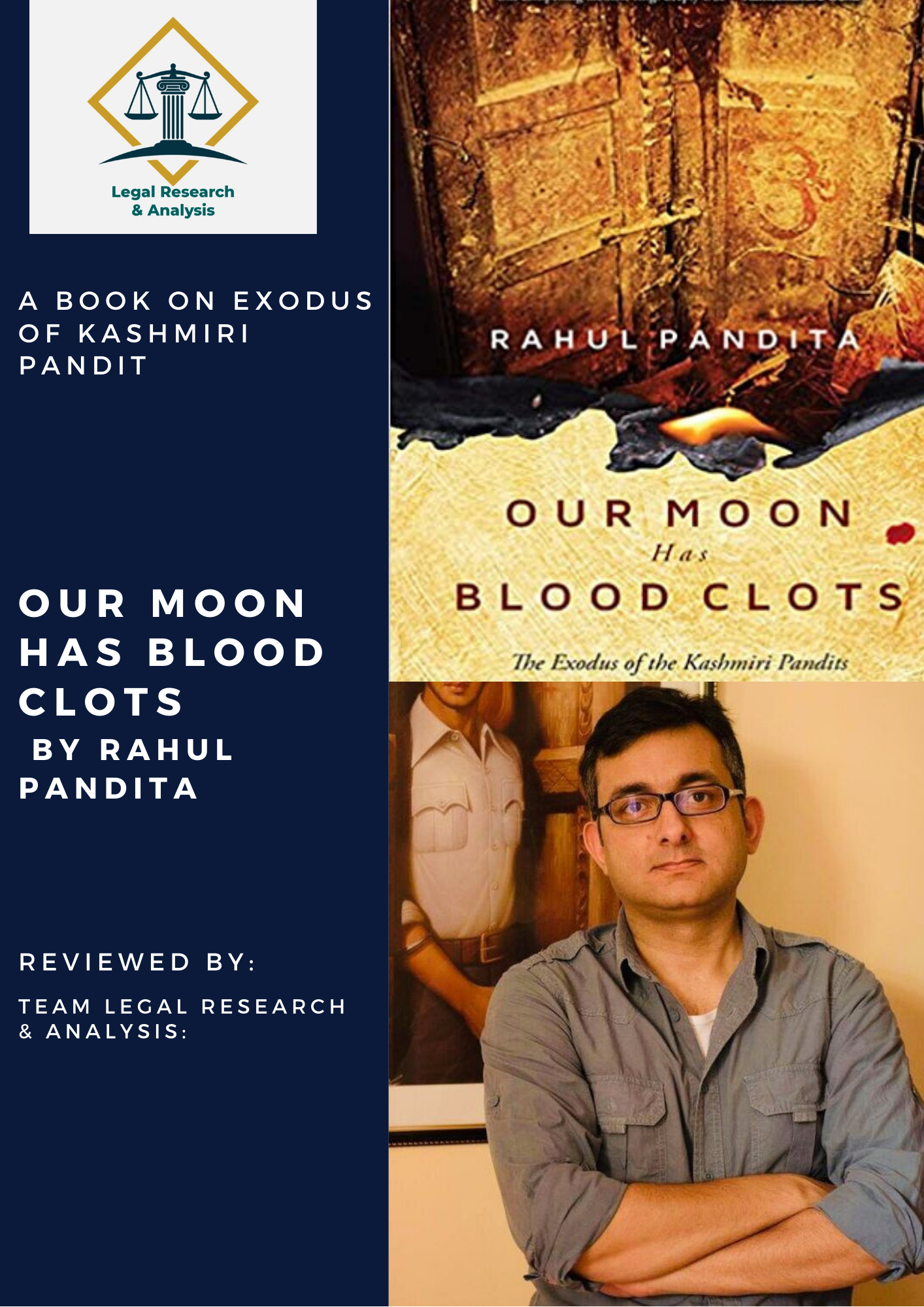 Our Moon Has Blood Clots by Rahul Pandita

During the onset of violent insurgency in 1990, various Kashmiri Pandit, evacuated from their houses. The same memories of the Violent insurgency were described by Rahul Pandita in his book where he wrote about his situation faced during the Kashmiri Pandit exodus in 1990. He shared about his unexceptional childhood, with some beautiful memory of Kashmir to the devastating catastrophic event of the Kashmiri Pandits exodus in 1990. The extreme violence by militants was heartbreaking, vivid, and emotional.

The author wrote this book when he was in Delhi and gives a brief flashback about Kashmir, their people, their cultures, history, and beauty of Kashmir and also the darkest era of 1990. He further wrote that Kashmiri has a relation with Punjab as both have a common ancestor. They exiled from Punjab around 300 years ago. He also stated that Kashmir had developed their philosophy on Hinduism, in which there is no discrimination. The Kashmiri Pandits do not believe in Maya as they believe in the existence of the real world. People generally call them Bhattas in Kashmir, this is something that the author never liked. Instead of their language, the Kashmiri scholar published Buddhist scripture in the Sanskrit Language. He also described how Islam arrived in Kashmir. He also revealed the history of several rulers who ruled Kashmir. Starting from Ancient history to Modern history, everything is present very briefly. He also emphasizes the role of Maharaj Hari Singh, who signed the instrument of accession.

The author also sheds light on Kashmiri Pandits and Kashmiri Muslim relations, which was extremely good as they used to live together in peace and harmony. Both of them take part in each of their festivals. Even the authors had many Muslim friends as well. But due to political behaviors of Indian politics as well as Pakistani politics had made their relationship sour.

The author also enumerated about her mother, father, paternal grandfather, maternal grandmother. His grandfather was a Sanskrit scholar, and his father worked in the irrigation department. His favorite festival was Shivaratri. He loved the downtown Srinagar. He also mentioned about his childhood friend Tariq with whom he used to play cricket. He also narrates the incident when someone has stolen old slippers of his father instead of new slippers.

In that game, he used to represent India, while Tariq used to represent Pakistan. Due to this game, he lost his friendship with Tariq. He also mentioned about the 1983 Sikh riots, the 1986 Anantnag Riots, the Srinagar blast of 1989, and the IC-814 Hijack.

The author faced a rude awakening from his friends, from the milkman, people celebrating when India loses any cricket match. One among those incidents was when his school friends tore a page of school’s Magzine, on which there was the picture of Saraswati on the first page.

In this book, the author mentioned his cousin brother Ravi who he loved a lot. He embodied the 1983 cricket match which he and his brother Ravi went to the stadium to watch, was played between India and West Indies in his state for the first time. He mentioned that when India lost that match, it was a celebration in Kashmir and the cries for Azadi rented in the air.

All those events are well-orchestrated so that the exodus of Kashmiri pandit becomes possible. The biggest catastrophe begins on 19th January 1990. Loudspeaker chanted and announced that they turned Kashmir into Pakistan.

The government has not taken any prudent steps regarding that. Even now, out of many accused, only some of them are arrested and got the punishment. In an interview, from one of the accused, it was questioned, how many Kashmiri pandits did you killed, replied that he remembers only 20. The court convicted him for life imprisonment. After spending 16 years, he is free now.

On 9th February 1990, he witnessed blood straits on the roads. Even in the Urdu newspaper, it was enshrined that, to kill Kashmiri Pandits and to rape their women. It was his last Shivaratri at home. He witnessed another shocking event when he heard about the planning of the attack on his home by those with whom he used to play cricket. He and his whole family were very traumatized by that event. They shifted to Jammu by taxi with some necessary items on that day. He spent a few days in the hotel and then in Geeta Bhawan, where he encountered the people of RSS, who were asking to take revenge on whatever happened to him.

They abate the author, to take revenge but instead of doing anything he told each and everything to his father.

His father told him to stay away from these people. Which latter, after the Gujarat riots incident, became the best decision for the author. The whole family shifted around 20 times in Jammu. Due to which the author couldn’t study properly. He got average marks, went Chandigarh for higher studies. They also faced some problems with there landlord as well who used to harass them So that they can leave the house. They finally settled at Chandigarh and then moved to Delhi and lived there.

During that period, his favorite brother Ravi married Asha and has a kid. Ravi also shifted to Jammu and left Kashmir. The most emotional moment experienced by the author was when he heard about Ravi was killed.

The family got displaced due to Ravi’s death. Ravi’s father shares his experience after the death of Ravi, how he and his wife Mohini lived her life without Ravi. He also shared a catastrophe of 1947 faced by Ravi’s father. In 2004 Author’s mother was suffered from neurological disorders. As a consequence, she was unable to walk. Then he brought a new flat in Delhi.

In the last chapter, the author tried to take the interview of various victims who faced the same violent insurgency in 1990. Amongst them, Vinod Dhar was one. In front of Vinod his mother, and brother were shot dead. He somehow managed to hide.

Around 3,50,000 Kashmiri Pandit became refugees in their homes. He also shared an incident where a 10-year girl in Delhi was asked by her teacher to describe her home. She heard various stories of violent insurgency in 1990. She replied that “she has no home, her home was burnt by the militant”.

In September 2007, the author finally saw his house after exile for many years. With the permission of the owner he took a photograph of that house. Everything seems changed at his locality. In the last, he finds Irshad, who was the friend of Ravi, but Irshad never interacted with the author. so he wrote a letter to him and designated himself as a brother of Ravi