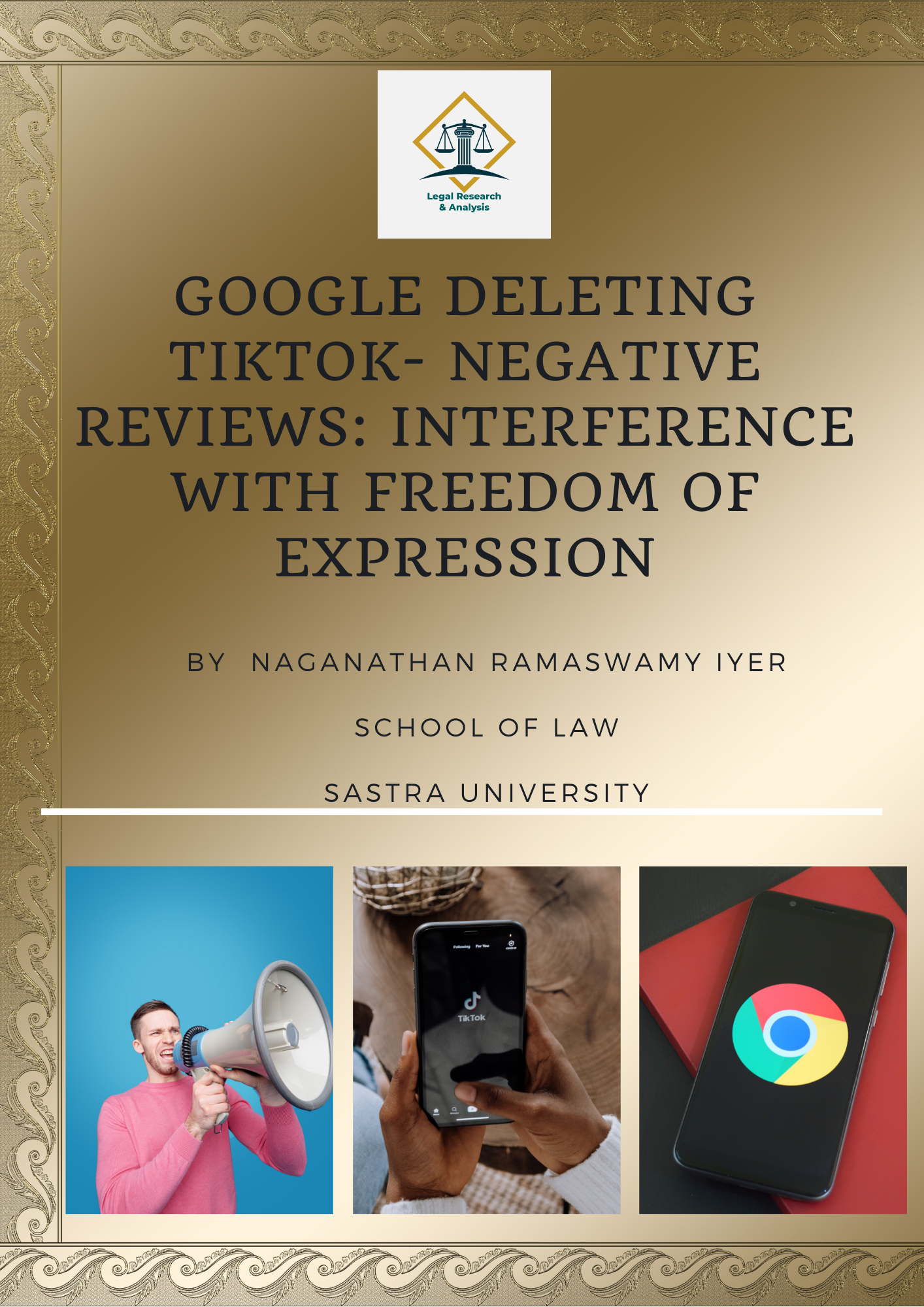 Tiktok, is an app owned by the Chinese company ByteDance which provides a platform for its users to post short videos, chat and socialize with the users of its database. The app has been a big success since its launch and has been downloaded by over 1 billion users globally. With over 100 million users, the Indian database has been the largest for the app.

Recently, a famous and influential Tiktok user by name Faizal Siddiqui posted a video which showcased the user throwing acid on the face of a woman because she had rejected his proposal. This particular video became viral and the ethics of the Tiktok app was vigorously questioned by NGOs, celebrities and activists. As a step to extend support towards the cause raised by the activists and NGOs, millions of users posted a 1-star review, which brought down the rating of the app from a whopping 4.8 stars to a meagre 1.4 star. The app was on the verge of collapsing, and this is when Google deleted close to 8 million negative reviews thereby increasing the rating of the app to 4.4 stars. This act of Google was widely criticised by the media houses, activists, celebrities and the general public. Most of them were of the opinion that Google violated the Right to Freedom of Expression by unanimously deleting such negative reviews by users.

Google came out with an explanation which was solely based on the policies they had adopted for monitoring the user reviews. They stated that under the policies laid out by Google, the company has all the rights to remove reviews and comments which are spam, or have been posted by multiple accounts accessed by the same person, or have been done with a motive of degrading the reputation of the app. While these explanations sound convincing, there is a need for deeper introspection and analysis before arriving at a conclusion.

Under Article 19(1)(a) of part III of the Constitution of India, it is provided that all citizens have the right to freedom of speech and expression[1]. The Fundamental Rights are the basic rights that all the citizens of the country are entitled to. No policies or decisions can prevail over the Fundamental Rights except provided by certain exceptions in the Constitution itself. As regards  the Freedom of Speech and Expression, certain exceptions are provided in relation to security of the State, friendly relations with foreign States, public order, decency and morality, contempt of court, defamation, incitement to an offence, and sovereignty and integrity of India.[2] The Freedom of Expression can be exercised, provided that it doesn’t obliviate the contents of the exceptions as per Article 19(2) of the Constitution.

Google seems to formulate its policies on the basis of the exceptions that are provided. The key question here is, are the conditions stated under Article 19(2) present in the current scenario? Let me break down these conditions and establish the relation between them and the reviews which were posted by the users.

The conditions that are taken into account by Google are public order, decency and morality and defamation. Google believed that the negative reviews were against the public order and morality as those reviews were done with a motive of tarnishing the reputation of Tiktok app. But, under the eyes of law are these reviews against public order and morality? Tiktok allowed the posting of a video which showcased an act which is against the public order. The society, collectively stood against this particular video. Public order is a condition characterized by the absence of widespread criminal and political violence, such as kidnapping, murder, riots, arson, and intimidation against targeted groups or individuals.[3] This is the ambit and scope of the limitation under Article 19(2) of the Constitution.

Moreover, the responsibility of Tiktok was to administer the contents properly and to monitor the quality of videos being posted. Tiktok failed in this step as it allowed the user to post such a video. This act by Tiktok in itself is violative of the general public order and morality.

The act of Google in deleting the reviews was indeed interfering with the Freedom of Expression. Google as a Socially Responsible company, should formulate policies which are forward looking and compliant with the letter and spirit of the law of the land. They must also from time to time take into account the views of the society at large. The society, in expectation of holding Tiktok responsible, wanted Google to remove Tiktok from its interface. However, Google acted very differently.

The policies adopted by Google state that they can delete reviews which are spam in nature. Spam reviews are reviews that are wholly or partially untrue, or that breaks the guidelines of the site on which the review appears.[4]

There have been instances where Google deleted reviews because they were spam in nature. A perfect example for this would be in the case where negative reviews were posted by users against an Educational Institution. The Institute had not promoted a certain child to the next grade, and the parent of the child influenced other parents and posted negative reviews of the Educational Institute. This is a clear example of a spam review, wherein there was no factual justification showing that the act done by the institute was wrong, and the review was posted merely to express the displeasure and defame the reputation of the Educational Institute. Hence Google deleted close to hundred such reviews.

Taking into account the negative reviews posted by users of Tiktok app, they do not constitute spam review as the reviews written by the users perfectly relate to the video which was uploaded by one of its users and thereby questioned the ethics and morality of the app. They wrote the reviews to express their displeasure towards Tiktok’s governance as well as the quality control in monitoring such substandard contents.

Having looked at the background of the above two instances, it becomes clear that Google’s act of enforcing its policy guidelines are not consistent.

A question may arise at this stage as regards the necessity of arguing about infringement of the Freedom of Expression when the act has already occurred and that it cannot be changed. Indeed, we must argue about this, not just for getting justice for the current event in question, but also for preventing such events recurring in future.

Hence, it is clearly visible that the Right to Freedom of Expression has been violated due to the actions of Google. Tiktok being an app with a huge database of users was potentially one of the most important applications of Google Play Store. If Tiktok was to be deleted from their interface, then Google would have to face a significant loss. Hence, Google took a calculated business decision to support and save its most popular app and neither paid attention to ethics around such act nor did it care for the views of the society.

It is important now for Google to frame its policies in a manner that embodies the views and opinions of the society and also business ethics that could help them take decisions that are seen as more responsible and reasonable by society.