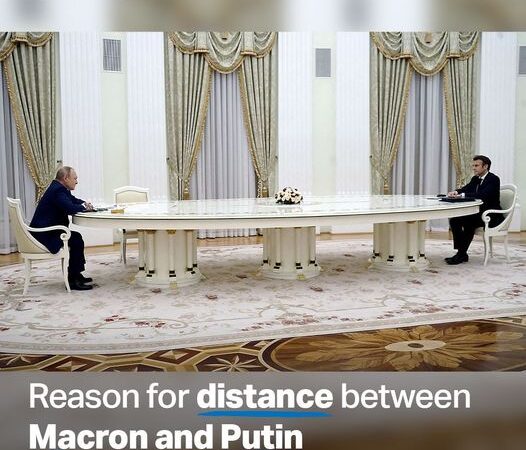 The 6-meter-long table that seated French President Emmanuel Macron and his Russian counterpart Vladimir Putin during talks had set social media alight, with a wave of internet memes and speculations.

The 6-meter-long table that seated French President Emmanuel Macron and his Russian counterpart Vladimir Putin during talks had set social media alight, with a wave of internet memes and speculations. The real reason behind the abnormal length of the table has been revealed; the French president refused a Kremlin request to take a Covid-19 test by Moscow’s authorities before meeting his Russian counterpart. As a result, the two leaders were socially distanced during lengthy talks on the Ukraine crisis in Moscow. Two sources from Macron’s entourage told Reuters that the French president was given a choice, either accept a PCR test done by the Russian authorities and be allowed to get close to Putin or refuse and have to abide by more stringent social distancing. They added that the test was refused over fears it would help Moscow get hold of the French president’s DNA. Meanwhile, Kremlin spokesperson Dmitry Peskov confirmed that Macron had declined the test and said that Russia had no problem with this and the refusal made no interference with the negotiations in any way.

Some million-plus people from Kharkiv, Ukraine’s second-largest city, say they stand ready to wage an armed campaign if Russia invades — in pictures

Legal Research and Analysis Women, feels excited to announce that, A movie titled “A little princess” will be broadcasted live, Sharp at 1.30Pm Today on the following platforms,

Legal Research and Analysis Women, feel excited to announce that, A movie titled “A little princess” will be broadcasted live, Sharp at 1.30 Pm Today on the following platforms,

https://rave.watch/mKQFs Rave Click the link to start streaming !!
Twitch
OBS Studios
Reddit/Groups
Facebook,
Instagram,
And
through our servers across the mainstream media.
Contact Ms Tanvi Janda for more useful FAQS and relatable links.
Why LRAWOMEN is hosting such a watch party!?
LRAWOMAN strongly believe in engaging through the most appropriate and innovative ways to keep awarding masses for wide public circulars. Legal Research and Analysis has been in past have broadcasted such watch parties for the moments we care to share with rest of world. Events like streaming good and relatable movies have always been a good move to convince the audience about our vision and mission.
Please enjoy with utmost etiquettes, Love, and Peace from Legal Research and Analysis, Enjoy the Sunday by watching some good stuff with us.
A Little Princess,
is a 1995 American family drama film directed by Alfonso Cuarón and starring Eleanor Bron, Liam Cunningham (in a dual role), and introducing Liesel Matthews as Sara Crewe with supporting roles by Vanessa Lee Chester, Rusty Schwimmer, Arthur Malet, and Errol Sitahal. The movie was distributed by Warner Bros. through their Warner Bros. Family Entertainment label.

India and Israel has launched a commemorative logo to mark the 30th anniversary of the establishment of diplomatic ties between the two countries. The logo was unveiled virtually at an online event in the presence of Ambassador of Israel to India Naor Gilon and Indian envoy to Israel, Sanjeev Singla. The logo features the Star of David and the Ashoka Chakra- the two symbols that adorn the national flags of both countries- and forms the numeral 30 depicting the 30th anniversary of bilateral relations. This special logo symbolises the strong friendship, love and admiration that exists between the people of the two nations. It also depicts the growing strategic partnership between the two sides.