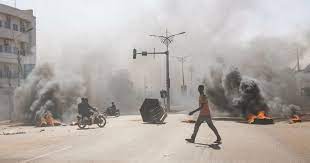 The UN, the West African bloc ECOWAS, and the African Union condemn power grab by mutinous soldiers.  Captain Kader Ouedraogo confirms the coup deta on state television `RTB’ in Ouagadougou, Burkina Faso on January 24.  The army said it seized power ‘without any physical violence against those arrested, who are being held in a safe place, with respect for their dignity.