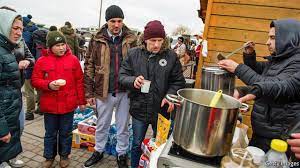 At the nearby border crossing, Medyka, the situation is even more desperate. Tens of thousands of Ukrainians, as well as foreigners escaping from Ukraine, queue on the Ukrainian side of the border in the cold, sometimes for more than a day. The traffic is such that many had no choice but to leave their cars behind and continue on foot. Holding a bag in one hand, her young daughter’s hand in the other, and carrying her toddler in a sling, Anastasia describes having to walk 17km to the border. She was greeted by scenes of chaos, she says, including impenetrable crowds and vigorous shoving. A young couple remember seeing a village consumed by flames on the way. “It was hell,” says Katya, describing the way her apartment in Kyiv shook as Russian bombs struck the city, and her subsequent journey to safety. “Fuck Russia,” she says, before apologising for her language and correcting herself. “Fuck Putin.”