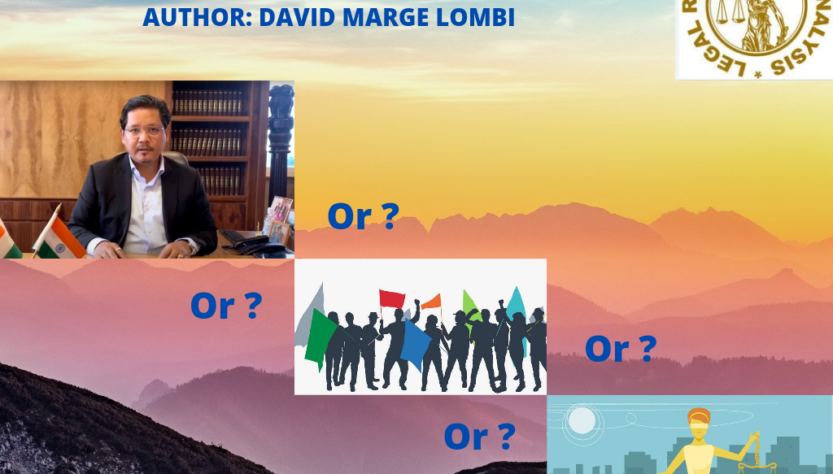 When dictators and tyrants seek to destroy the freedoms of men, their first target is the legal profession and through it the rule of law.  —-Leon Jaworski

This voice, driven by the thirst for “human right justice”, today asks “Who runs ‘Meghalaya’, Conrad Sangma, Pressure Groups, or Rule of Law?

Since time immemorial it has been charmed as “Scotland of the East”, “abode of clouds”, “heaven on earth”. But this is all geographically what nature has provided. Today greater concern for putting up the aforementioned question on the face of the Meghalaya government is to check what lives have been provided here by the rulers; to investigate on the record of civil rights & liberties – civil rights which form the backbone of human rights.

The Indian North Eastern State “Meghalaya” was carved out of Assam in 1970.[1] Shillong which is at present the capital city of Meghalaya, was then established in 1874 as the headquarters of the erstwhile Assam Province.[2] After the proper separation of aforementioned two states, issues of indigenous identity, culture and rights that remained suppressed earlier became subjects of irreconcilable conflict.

Then somehow, and not very absolutely, Meghalaya witnessed a little peaceful situation for almost two decades. But then again, Anti-CAA agitation across the Northeast led to protests in Meghalaya also. Now this was vigorously coupled with the demand for implementation of ILP too. These movements resulted in friction between tribals and non-tribals. Eventually igniting the fire of native vs outsiders.

INDISPUTABLE & A LANDMARK REMARK BY “MPHRC”  ON THE RECORD OF HUMAN RIGHTS IN THE STATE OF MEGHALAYA.

On 10 December 2014, in Shillong, Meghalaya, while commemorating the 65th International Human Rights Day, MPHRC mentioned “……..unfortunately the human rights situation worldwide still remains grim and Meghalaya is of no exemption”.[8]

During the occasion then, MPHRC further appealed- “MPHRC strongly demands the government to uphold its commitment for the protection of human rights and the rule of law to provide access to justice for all for the enjoyment of fundamental Freedoms”.

“The Government must bear the ultimate responsibility as the guarantors of human rights in addressing the injustice and numerous rising forms of human rights violations which have reached a level that jeopardizes peace and security in the state” said Chairman MPHRC, Dino D. G. Dympep

“The fight for the preservation and promotion of indigenous peoples identity is a global concern that is debated across international platforms. While expressing our solidarity with the peoples’ movement for the attainment of the right to protect and preserve the indigenous peoples identity in our state we are extremely concerned with the current government apathetic attitude in addressing the issue with sensitivity” said Chairman MPHRC, Dino D.G. Dympep.

“The year has witnessed many serious human rights violations and loss of lives across the State and of which the Government has failed to bring justice to the perpetrators. These violations include arbitrary detention including death in police custody, kidnapping and killing with impunity by both the security apparatus and the insurgent groups. Other rights violation such as atrocities against women and children including rising incidences of cases of rape continue unabated” said MPHRC.

Today I urge that, there is an urgent duty on the part of the entire citizens living here in Meghalaya to enquire from the Conrad Sangma led government, “Over the course of a very ordinary life’s journey till present date, where have each lives been brought to today, by the latter? During this whole course, has there been any revival on the human rights condition within Meghalaya?

SOME OF THE INSTANCES WHERE DIRECT THREAT TO THE RULE OF LAW WERE EVIDENT, AND THE SAME WHICH CAUSED LOSSES TO NATIVES & NON-NATIVES, BOTH.

This violence was erupted just a day after the clashes broke out at Ichamati village in Shella at the end of a meeting organized to discuss CAA and ILP.[11]

Dorbar Shnong, an important political institution for the Khasi and Jaintia tribes of Meghalaya, mentioned that the incident was a “clash between two groups and not to be misunderstood as racial”.[12]

However, there is an indisputable fact which entire citizens across Northeastern States are aware of. The fact that incidents like this are not stand-alone; Meghalaya has a history as well as chain of similar events. Therefore I am justifiably too hesitant to accept aforementioned statements by the representatives of the Dorbar Shnong.

“We are planning surprise protests in the days to come, and the Centre would be responsible if there is any breakdown in law and order in the State,” said KSU president Lambokstarwell Marngar.[13]

Meanwhile, the Synjuk Ki Rangbah Shnong (SRS) of War Jaintia region, a conglomeration of the headmen, have also extended their support and cooperation on the issue to the KSU.[14]

EVERY RIGHT CONFERS DUTY IN ITSELF.

Where there is a right there confers duty on us. It is the very constitutional norms that direct us to battle for our rights and at the same time confirm that we remain duty bound to not infringe others’ rights too.

Can the Meghalaya government with full confidence proclaim today to the entire India that this prudence of law was maintained while the entire State was battling for their demand which they believed to be rightful since time immemorial?

Were the State at all impartial & delicate towards the fundamental rights, civil rights & liberties, and above all the basic human rights of every section of the people who had no voice of defence during those periods of huge struggle?

CASE OF PATRICIA MUKHIM RELATED TO HER FB POST.

Following the incident of 3rd July 2020 where 6 Bengali boys were attacked by 20-strong-mob in the Lawsohtun district of Meghalaya, Journalist Patricia Mukhim took on the inhuman incident through her facebook posts tagging chief minister Conrad Sangma. Some lines extracted are-

But to the utmost wonder, following this, right away a complaint was filed against her post by the Lawsohtun Village Council. In the complaint, Lurshai Shylla the headman & Bankhrawkupar Sohtun secretary of Dorbar Shnong of Lawsohtun said that Mukhim’s statement incited communal tension and might instigate conflict.[15] [16]

Very greatly later on 25 March 2020 (which is approximately 9 months after the FIR filed against her), the Supreme Court quashed the FIR that was filed against her. The Supreme Court, while quashing the FIR against Mukhim, said “free speech of the citizens of this country cannot be stifled by implicating them in criminal cases”.[17]

The Conrad Sangma led government in Meghalaya is liable to answer today to the question that, is it the notion for rule of law in Meghalaya that the post like of Patricia incites communal tension and threat to the peace & security of this State?

The fact remains that- When the British were expanding their footprint in the northeast, the Bengalis were brought to the region for clerical jobs, and a number of middle-class Hindu families from Sylhet district (that became a part of East Pakistan after Partition), made Shillong their home. The non-tribal communities in Meghalaya include Bengalis, Nepalis, Bihari, Punjabis and Assamese among others.

TATHAGATA ROY’S REACTION ON THE PLAGUE THEN.

Following the incident of 21 October 2020 where posters were displayed throughout the public places, Tathagata Roy ex-Governor of Meghalaya took on the inhuman act through his twitter posts.

MY URGENT APPEAL WITH THE CONRAD SANGMA LED GOVERNMENT, WITH VARIOUS NGOs, & WITH SEVERAL PRESSURE GROUPS IN MEGHALAYA TODAY.

Thus, it is rightly quoted by Edward Snowden – “The rule of law doesn’t mean the police are in charge, but that we all answer to the same laws.”