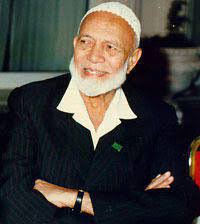 Some decades ago, countries around the world were trying to free themselves from colonial oppression. Simultaneously, the colonized countries faced an attack on their respective faiths. It was in such turbulent financial and spiritual times. In 1918, a boy named Shaikh Ahmad Deedat was born in Tadkeshwar, Surat, British India. A few months after his birth, Ahmad’s father— Hussain Ahmad Deedat, a tailor occupation, left for South Africa in search of work. Later when Ahmad was 8 years old his father called him to South Africa. Soon after his departure, Ahmad’s mother died in India. After her death, Ahmad and his father started living together in South Africa. Hussain Deedat wanted his son to be an educated person, so he admitted Ahmad to an English-medium school in South Africa. It was a challenge for Ahmad to cope-up with the children from his school since his mother tongue was Gujrati. Nevertheless,