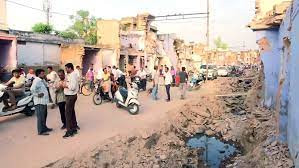 Amid controversy over anti-encroachment drives conducted in Delhi, Uttar Pradesh, and Madhya Pradesh, a ‘gaushala’ (cow shelter) was demolished in Rajasthan’s Alwar district on Saturday. This comes just a day after the district administration razed a 300-year-old Shiva temple in Rajgarh in the same district. The opposition Bharatiya Janata Party and the ruling Congress have been quick to exchange barbs; the BJP has accused the Ashok Gehlot government and the Congress has blamed the BJP-run municipality for the demolitions.