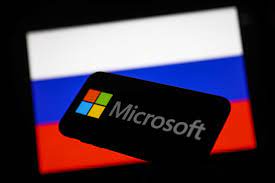 Microsoft suspends sales in Russia in a major blow to the Russian economy Software giant is the latest company to abandon the country after the Ukraine invasion and Western sanctions.

Microsoft released a statement Friday saying it has suspended all new sales in Russia.

The company is also working on government sanctions with the U.S., European Union, and the UK.

Other companies like Apple, Disney, and Ford have decided to halt business in Russia due to the Ukraine invasion, further hurting their economy amid harsh sanctions.