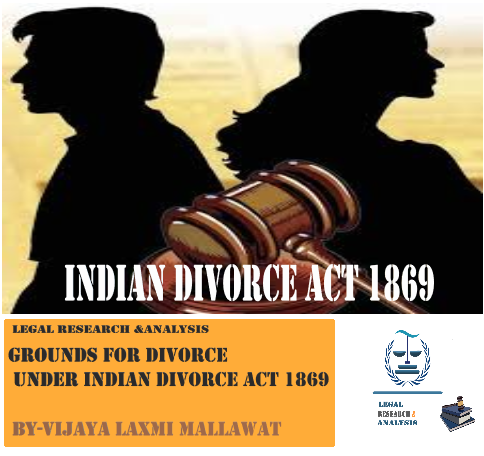 The Act came into existence on 1 April 1869. The British had first enacted this law before Independence and it continues to be force today.

Preamble – WHEREAS it is expedient to amend the law relating to the divorce of persons professing the Christian religion, and to confer upon certain Courts jurisdiction in matters matrimonial.

This Act originally extended to the whole of India except the State of Jammu and Kashmir.

The government of India revoked the special status given to the State of Jammu and Kashmir which was bestowed through Article 370 of Indian Constitution in August 2019 through a Presidential Order and the passage of a resolution in Parliament. Therefore, now this act would also be applicable in this state.

The Indian Divorce Act governs divorce among the Christian couples in India. The parties must also reside in India to apply for any remedy under the Act.

GROUNDS FOR DIVORCE AFTER AMENDMENT

For section 10 of the principal Act (act 4 of 1869), with changing requirements and an aim to remove difficulties the following section shall be substituted, namely:-

“10. Grounds for dissolution of marriage.-

(1) Any marriage solemnized, whether before or after the commencement of the Indian Divorce (Amendment) Act, 2001, may, on a petition presented to the District Court either by the husband or the wife, be dissolve on the ground that since the solemnization of the marriage, the respondent:-

(i) has committed adultery; or

(ii) has ceased to be Christian by conversion to another religion; or

(iii) has been incurably of unsound mind for a continuous period of not less than two years immediately preceding the presentation of the petition; or

(iv) has for a period of not less than two years immediately preceding the presentation of the petition, been suffering from a virulent (dangerous) and incurable form of leprosy; or

(v) has for a period of not less than two years immediately preceding the presentation of the petition, been suffering from venereal disease (example: HIV AIDS) in a communicable form; or

(viii) has failed to comply with a decree for restitution of conjugal rights for a period of two years or upwards after the passing of the decree against the respondent; or

(ix) has deserted the petitioner for at least two years immediately preceding the presentation of the petition; or

(2) A wife may also present a petition for the dissolution of her marriage on the ground that the husband has, since the solemnization of the marriage, been guilty of rape, sodomy or bestiality.”

DISSOLUTION OF MARRIAGE BY MUTUAL CONSENT

10A. Dissolution of marriage by mutual consent.

(1) Subject to the provisions of this Act and the rules made thereunder, a petition for dissolution of marriage may be presented to the District Court by both the parties to a marriage together, whether such marriage was solemnized before or after the commencement of the Indian Divorce (Amendment) Act, 2001, have on the ground that they have been living separately for a period of two years or more, that they have not been able to live together and they mutually agreed that the marriage should be dissolved.

(2) On the motion of both the parties made not earlier than six months after the date of presentation of the petition referred to in sub-section (1) and not later than eighteen months after the said date, if the petition is not withdrawn by both the parties in the meantime, the Court shall, on being satisfied, after hearing the parties and making such inquiry, as it thinks fit, that a marriage has been solemnized and that the averments in the petition are true, pass a decree declaring the marriage to be dissolved with effect from the date of decree.”.

The petitioner states on oath that both she and her husband have been living in India since their birth and both of them are Indian Christians.

Very often he used to return home at night in a drunken condition and on some occasions he did not return home at all. In her evidence she states that on 2-6-1955, her husband wanted to go away for the night alleging that he was going out on a pressing business. As she protested, her husband slapped her on her cheek, gave her a push as the result of which the petitioner fell down and sustained a bleeding injury on her forehead. She even found a girl lying in his bed with her body covered with a sheet up to the throat.

The girl with whom the husband had sexual intercourse was unmarried. Inspite of this, can the offence be considered as adultery as per this act?

The evidence of cruelty and desertion was quite satisfactory and there is no reason why that evidence should not be believed.

Also the law laid down by matrimonial courts in England has been summarised in the following words:

“For the purposes of relief in the matrimonial jurisdiction adultery means consensual sexual intercourse during the subsistence of the marriage between one spouse and a person of the opposite sex not the other spouse.”

Mr. Gupta (Amicus curiae) argued that under the Indian Divorce Act it was not necessary that adultery must be committed with a married woman.

Confirmation of a decree nisi for dissolution of marriage was enforced.

Adultery has been very intelligently interpreted in accordance with English law to meet the purpose of this Act, which otherwise would become restricted had the definition of Indian Penal Code would be followed.