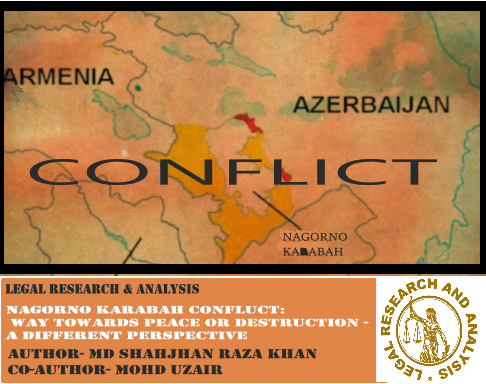 Amidst all sorts of chaos humans are trapped in 2020, what has taken the world community by storm is the recent events of the disputed region of Nagarno Karabakh and the reasons are both surprising and heartbreaking, seemingly any further escalation from any side will only invite harm to the people of Nagorno karabakh as well as to the people of Armenia and Azerbaijan– the arch rival nations both claiming the territory of their own.
But why did this violence actually happened ? To let us understand this, we need to go back to history and trace the real reason for these violent
unending attacks from both sides.

Before their Independence, Eastern Armenia and Azerbaijan was under Russian empire, and Western Armenia under the Ottomons. After their fall, both of them became independent states, however, shortly after their independence both Armenia and Azerbaijan were incorporated within Soviet Union as Armenian Soviet Socialist
Republic and Azerbaijan Soviet Socialist Republic. Joseph Stalin incorporated the Nagorno Karabakh region within the territory of Azerbaijan going against the popular opinion of majority Armenians living
in Nagorno karabakh. And this particular event of history is still referenced as a claim over the territory of Nagorno Karabakh by the authorities of Azerbaijan.
They remained under the soviet union till the dissolution of Soviet union(USSR) in 1991 and declared their independence in the same year but what remained like Kashmir in that part of world was present day’s Nagorno-karabakh of the republic of Artsakh which remains unresolved till today amidst relentless violent attacks, insurgencies, wars and casualties. During these years the dispute was not at the peak but rebellions started to grow during the period of 1980s- when the central power of Soviets in Moscow was declining- by the majority ethnic Armenians against the azeris for the Nagorno karabakh with some adjoining districts as Republic of Artsakh which was an internationally recognized territory of Azerbaijan
but what followed after the Nagorno-karabakh war hyped and made the issue more deep and disputed in 1994.

The first demand came from the soviet Armenia from the soviet Azerbaijan in 1988 that the disputed region of Nagorno karabakh should be handed over to them as the majority of the people living there were ethnic Armenianians, however, the adjoining districts surrounding Nagorno karabakh consists of majority of Azeris and they’re ruling their as Republic or Artsakh. Post 1994 after the declaration of secession by Armenia through military might, and ceasefire the region became independent, though low intensity conflict kept happening within the region till 2020. After occupying the Nagorno Karabkh, the Armenians ethnically cleansed the Azeri population of the region which worked like a fire on the oil and further escalation started happening from the side of Azerbaijan. The
first major blow and ceasefire violation took place in 2016. But these small scale conflicts and combat took a huge shape in the form of full scale war in 2020. Since then the conflict has taken the world community by storm. This war has been felt by many other states and their direct and indirect involvement in this can further ruin the status quo for both themselves and most importantly for the people of Nagorno karabakh.

The other states like Israel, Pakistan, Russia, Turkey, Iran etc. has their own geopolitical interests in it which is why they’re involving themselves in this but this could destroy many nations in the coming years if it goes on like this. The best
any particular nation could do in this is to stay neutral and think as per the internationally recognised sanctions regarding the region.

Going by internationally recognised provisions which recognise the
territory of Nagorno Karabakh as the territory of Azerbaijan and solving the issue through dialogues can only bring peace for the people of the region and what little is expected from other states is that they should exhibit their rightful behaviour rather than trivialising the matter further.
In this war Turkish Media and authorities is supporting Azerbaijan, certain sources claimed that pakistan has also supplied certain aid, Israel is also aiding them by supplying deadlier weapons to Azerbaijan.

Iran has been seen supporting Armenia, however Russia has kept a neutral stance over this issue, although Russia had an agreement with Armenia to support them with military aid as per collective security treaty organisation(CSTO)whereby it’s mentioned aggression against one nation shall be considered aggression against all. There are six members of this organisation including two observer nations. But on the issue of Nagorno Karabakh they can’t intervene directly into the matter as they themselves recognise it as part of Azerbaijan. It’s very unlikely that Russia would help Armenia in this case but there are possibilities it might intervene in future because Azerbaijan supplies its gas through a pipeline named Baku-Tblisi Ceyhan(BTC) so it might not intervene for Nagorno karabakh but it may
intervene to destroy Baku-Tblisi Ceyhan(BTC) pipline which Russia has formerly attempted when they scuffled with Georgia. Current President of Azerbaijan has also warned Russia not to intervene in this matter militarily.
Turkey is supporting Azerbaijan because Azerbaijan is one of the turkic nation and part of Turksoy organisation which is considered to be the most powerful organisation of turkic nations. There are total of 6 founding Turksoy members including Azerbaijan. Apart from it, Turkey considers itself as the remnants of the great Ottomons and Armenia as one of its former province who betrayed against them making a way for its downfall. The case of Israel for supporting Azerbaijan is both strategic and geopolitical. Israel wants to put a direct leash upon Iran as both Azerbaijan and Iran shares border together and by helping them they can use the azeri land to further escalate aggression against Iran.

Also Azerbaijan was one of the first muslim nation that recognised Israel. Moreover Iran fears Israel will become stronger which might trouble them as Israel can use Azeri land to come offensive for them. Another angle for their support to Azerbaijan could be the rise of Turkic race and nationalism within Iran as Iran has very large number of Turks and Azerbaijan becoming stronger could together with the help of Turkey might fuel Turkic Nationalism within Iran and as a result of which Iran, keeping future possibilities holds an anti-azeri stand. Conclusively Iranian authorities is playing a bit tactical here. As far as Pakistan is concerned, it’s the only nation that doesn’t recognise Armenia as a nation-state. Tukey’s relations with Pakistan in the recent years has gone higher and that too could be a reason for their enthusiastic indirect cooperation to Azerbaijan. Pakistan like Turkey doesn’t recognise armenian genocide and since 1970s has supported the stand of turkey on the matter of Armenia on ideological
equivalence. The founder of Pakistan Mohammad Ali Jinnah too had good relations with Mustafa Kemal Ata Turk, founder of Modern Turkey. This man Ata Turk was known for his firm anti-armenian stand as
well as militant and violent Turkic Nationalism. Another point that stopped pakistan to recognise Armenia was the Khojaly Massacre of 1992 by Armenia which is considered to be the largest massacre in
the Nagarno Karabakh.
However Saudi Arabia, USA and few other nations has called for peaceful solution to the matter. So far two ceasefires has been broken. America-brokered ceasefire was once again announced on monday that too was violated immediately. The conflict this year began on September 27 and since then it has only flared up. But in this chaotic and suffocating environment the real sufferers are the people of Ganja city, Nagorno
Karabakh and the casualties of the Army who didn’t deserve any of these things. As per reports Armenia is shelling upon Civilians of Ganja and their aggression keeps growing, however despite being in a better strategic and strong position Azerbaijan is only resisting the aggression, though no player in this game of violence is purely clean. Every one has dirtied their hands enough to be come under the hammer of criticisms but as a human being we all should pray for peace.

Only time will tell what happen to this event of violence, but what remains as the most significant and important question here is the people of Nagorno Karabakh because ultimately its their land and it should be their choice, of each and every Azeri and Armenian living there. Nations should seek a rightful solution to their rightful claim and peace must prevail because as a muslim one can support the oppressed muslims, and as a christian one can support an oppressed christian but as a cosmopolitan
citizen and human being- we must support the destitutes and oppressed as there’s no religion of the oppressed.

We don’t know where it might end but we can certainly work to make the world better for all, a world without destruction and with peace. All the actors involved in this dispute must make a way towards the goal of peace of the region not violence.
Let peace prevail, and let it end here with the quote of Martin Luther King Jr. ,” Injustice anywhere is a threat to justice everywhere”