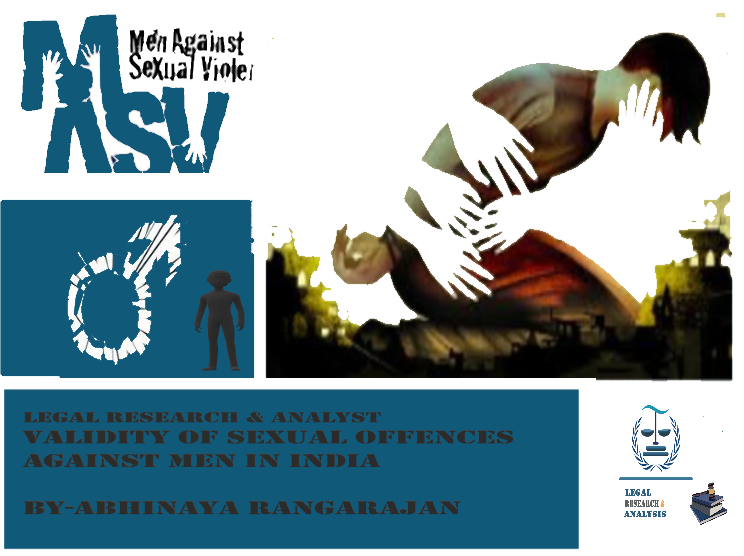 Validity of sexual offences against men in India

The fourth prevalent crime in India has been sexual crime[1].

A report states that India is the world’s most dangerous place for women[2]. Women were also viewed as victims of rape or sexual assault as the physically weaker segments of the society. Women have many beneficial legislation for fostering the well-being of the female population. The definition of equality under Article 14 of the Indian Constitution indicates that everybody before the eye of the law is equal. Nevertheless, the welfare statute has not yet guaranteed equal recognition for men and women. Security from the sexual harassment under Indian Penal Code does not extend to other groups such as men and transgender. The 2019 Act recognized that the sexual crime against a transgender is a petty offense that levied a minimal sentence. The worst thing is a sexual assault on a man is not even a crime. Such legal provisions for sexual offenses against men have been introduced by several international nations. Some countries have at least recognized such an offense as a crime.

Comparison between Indian report and US report:

As per India, NCRB declares that 1 woman is raped in every 15 minutes.[4] A study also states that around 90 women are raped every day.[5]

Sexual crimes have become the fourth prevalent crime in India. Country like India failed to recognize the rape against.

Sexual harassment against men are not reported, even if reported such offense is not recognized by the Indian Criminal justice system

United States is the first country in the world to recognize male rape. It criminalized male rape under Criminal Justice and public order Act, 1994. The first rape case appeared before the court in 1996- R vs. Richards[7] [8]

In India, The Protection of Children from Sexual Offences Act, 2012 provide protection for both male victims and female victims below the age of 18.

Existing Indian Criminal Justice System does not recognize rape of males as an offence.

In Sakshi vs. Union of India[9], a writ petition was filed under Article 32 of the Indian constitution.

Based on the interpretation of the case, the court ordered the Law Commission of India to examine and review the rape laws. The report suggested that the offense of rape should be substituted by the offense of sexual assault, by making the crime gender-neutral for forcible penile/vaginal penetration.

Major recommendations of this report:

Nirbhaya case is the popularly known Delhi gang rape case, 2012. It is the infamous case which portrayed India an unsafe place for women. In this case four men gang rape a girl, inserted an iron rod in her private part. This brutal and inhuman activity of these men was widely criticised but still rapists were hanged seven years later.

This case strengthened certain myths such as

By summarizing the above myths, some say that Men cannot be raped.

But the untold truth is:

After the worse experience of the Nirbhaya case, the government formed a committee to recommend legal reforms and also to suggest possible ways to eliminate sexual violation. This committee was headed by Justice Verma, and this committee is also called as Justice Verma committee.

The main aim of this committee is to provide a strong Anti-rape law. It also recommended strong law for offences committed against women. It also highlighted gender equality.

Finally, based on the recommendations of the committee, Criminal law (amendment) Act, 2013 was passed.[11]

Because of increasing sexual crimes against women and also by recognizing the infamous case (Nirbhaya case), this 2013 bill was not enacted as an Amendment Act.

This amendment bill was introduced by K T S Tulsi, member of Rajya Sabha. The recommended that

The Supreme Court in Tarkeshwar Sahu vs. State of Bihar[12], the court underlined the essence of modesty of a woman. When there is an injury to the bodily integrity, the offender is liable under Section 354. The above act amount to an offence, because of the sex of the women. This standard might have given to male and Transgender also.[13]

An Adult male victim (of rape) does not have any remedy under Indian Criminal Justice System. A male victim may be raped by a woman or a transgender. A male can be even raped by male.

When the perpetrators were male, the only remedy for the male victim is from Section 377 of the Indian Penal Code