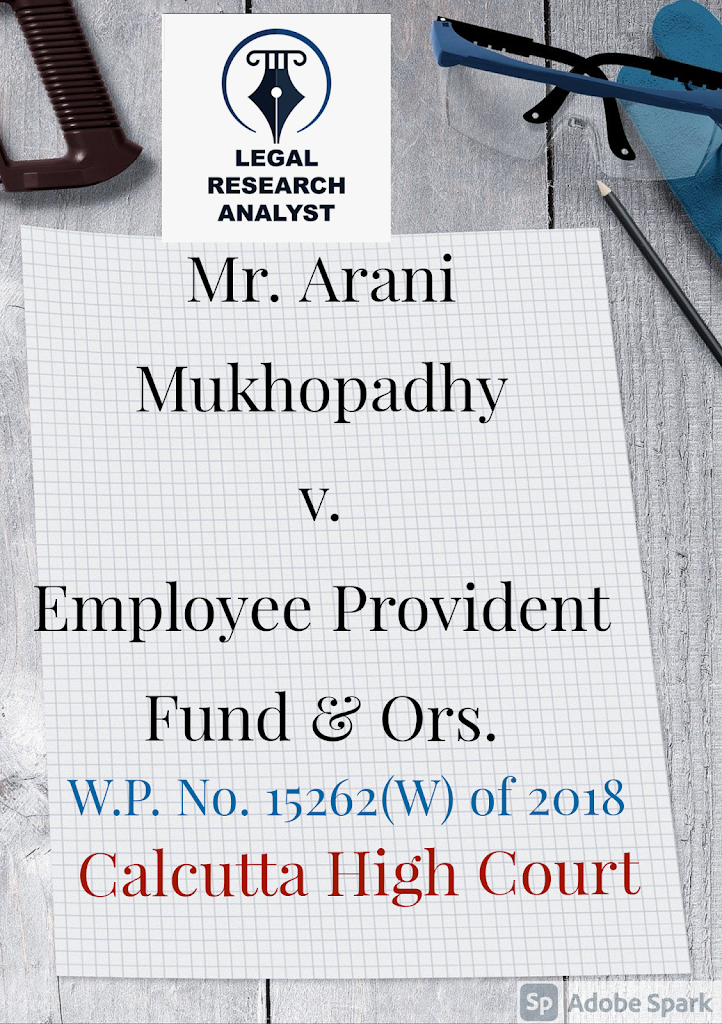 Application under Article 226 of Constitution for Non payment of Provident Fund and incorrect date of resignation on Pension Payment Order(PPO) Book maintained by Respondent Company.

Facts of the case

Issue raised by the petitioner

Case law cited by the court in the judgement

Bakshish Singh v. M/s Darshan Engineering Works & ors. 1994
In this case it was held that Gratuity with EPF and pension comes under retrials benefit. The court observed that the amount paid to petitioner in retiral benefit includes PF and court attained finality in respect of petitioner claim. And also observed that there was no need to mention Arcot Textile Mill case and Olga Tellis Mills Limited case by petitioner in the present appeal.
Olga Tellis & ors. V. Bombay Municipal Corporation & ors. 1985
Court in this case held that Right to get PF is a part of Article 21.
Arcot Textile Mills Limited V. Regional PF Commissioner & ors. 2013
Court in this case held that it is a statutory duty of the employer to make deposit that is due on a timely basic under EPF and Miscellaneous Provision Act, 1952.


In Otis Elevator Employees’ Union S. Reg v. Union of India, 2003
The court in this case discuss the term “retiral Benefit” and its relevance by enumerating that Retiral benefits have been common in government establishments. As per Industrial Dispute Act, compensation to be paid on termination of the service of an employee by way of retrenchment, om transfer or closure of undertaking. National Commission undertakings  measured Labour-Social security based on human dignity and social justice.
The court cited Employee’ PF Scheme, 1952 and declared that enjoyment of PF and Pension by employees treated as retiral benefits.
The Supreme Court in Indian Council for Enviro-Legal Action V. Union of India & ors. 2011 SCC 161
In abovementioned case, the court discussed the entire issue of finality of judgement and declared that order on 20th December 2006 as a final Judgement. The court cited the maxim interest reipublicae ut sit finis litium which means that for a public good that there be an end to litigation after a long hierarchy of appeals.
The court presumed that controversy between the parties must come to an end by the decision of the court on 20th December 2006 and acquire finality. For that the court also dismissed the review petition, even the Curative petition.
M. Nahabhushana V. State of Karnataka 2011
In this case court held that doctrine of res judicata is a fundamental principle which sustains the rule of law in ensuring finality in litigation. The objective of this doctrine is to serve fair administration of justice and to prevent abuse of court.
The court observed that respondent company has made the payment to the writ petitioner according to the order dated 21st September 2006, which was accepted by the petitioner. The court also viewed that petitioner accepted the order dated 20th December 2006. Petitioner accepted the amount payable as a retiral benefits and hence attained finality. Since there is no appeal challenging these order the court viewed that the present writ petition is arising out of the facts and circumstances which has already been adjudicated by the court in the year 2006.

Decision of the Court

The court applied the doctrine of res judicata and constructive res judicata in this case. The court direct the respondent to correct the date of resignation from service of petitioner in Pension Payment Order (PPO) book maintained by Respondent company, according to the order dated 21st September 2006 i.e. 15 October 2006 and recalculate the amount of pension which the petitioner is entitled to receives according to the procedure established by law. The court direct the respondent to credit the actual due to petitioner within a period of 6 week from the date.
The court disposed the matter without any order as to cost.
For full judgement click here.