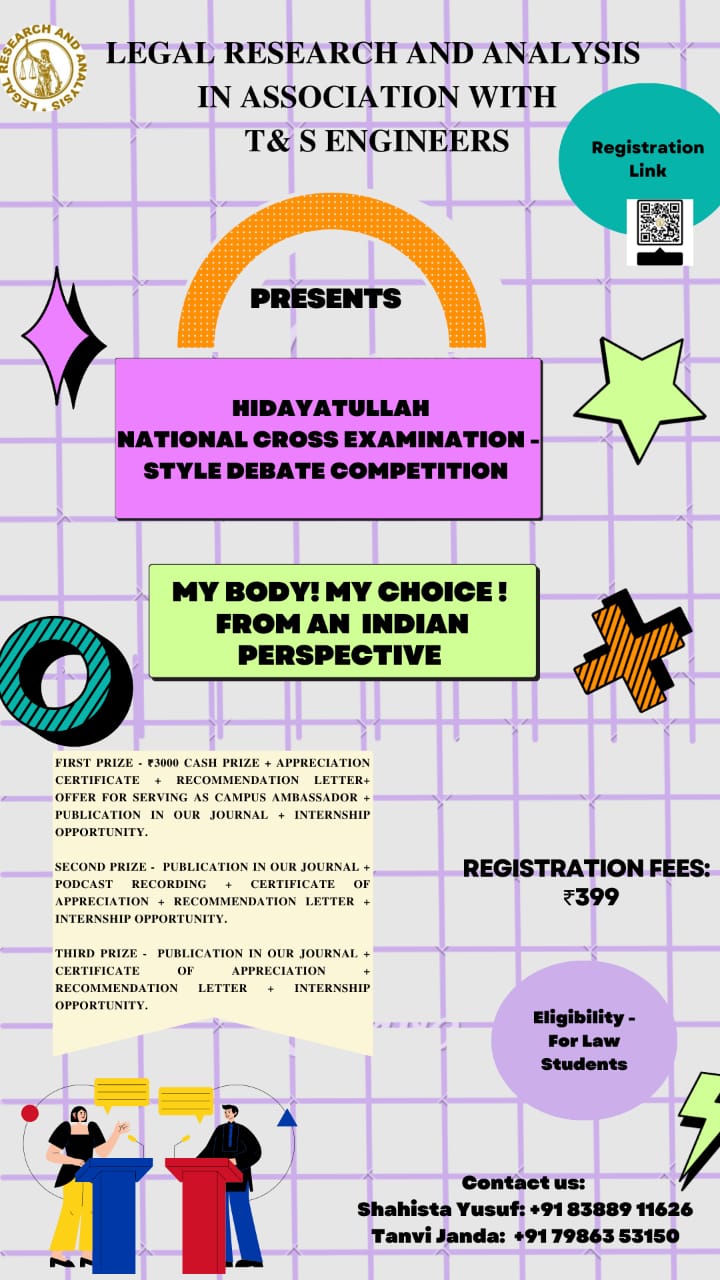 Legal Research & Analysis or LRA Meta properties Private limited is a registered corporate entity under
the companies Act, 2017. It’s a law organization typically dealing in research and policy studies.
Legal Research and analysis is also the premier and leading International Legal portal focused on law and
government. It provides access to an extensive and fast-growing online library of free legal resources for
use by legal professionals, students, consumers, and businesses.

Objectives of the Program

● The purpose of scholastic debate is to train the students to analyze a problem, conduct thorough
and relevant research, and utilize principles of argumentation and advocacy in orally presenting
the most effective case for or against a given proposition.
● Debate provides invaluable training in critical thinking, quick responses, defending worthy ideas
and attacking invalid ideas. It teaches the student to tolerate other points of view. Debate exists
only in democratic societies, and no democratic society can exist without debate.
● Through active participation in the debate activity, students will compare and discriminate
between ideas x and y, verify the value of evidence for concept x or y, resolve controversies,
recognize strengths and weaknesses of arguments, as determined by successfully attending to at
least 80% of the rubric items for the assignment.
● In general, the benefits of debate include:
● Gaining broad, multi-faceted knowledge cutting across several disciplines outside the learner’s
normal academic subjects.
● Increasing learners’ confidence, poise, and self-esteem.
● Providing an engaging, active, learner-centered activity.
● Improving rigorous higher-order and critical thinking skills.
● Enhancing the ability to structure and organize thoughts.
● Enhancing learners’ analytical, research and note-taking kills
● Improving learners’ ability to form balanced, informed arguments and to use reasoning and
evidence.
● Developing effective speech composition and delivery.

1- There are two, two-person teams, each from the same school, designated respectively “Affirmative”
and “Negative.” All teams will debate both sides of the topic in different rounds.

2- The Chairman will open the debate and call upon each speaker in turn. The Chairman may be addressed as Mr. or Madame Chairman in an opening salutation, but need not be addressed otherwise. No salutation is required, but it is customary for each speaker to begin with some polite form of address such as “Mr. Speaker, honorable judges, worthy opponents, ladies and gentlemen…” etc.

3- Speeches are addressed to an audience consisting of the judges and all other persons in the room. Other debaters are customarily referred to in the third person during speeches, in the second person during cross-examinations.

4- Each speaker delivers a constructive speech, cross examines one member of the opposing team, and
delivers a rebuttal.

6- All speakers are allotted equal times for their constructive, cross-examinations, and rebuttals.

7- Constructive Speeches
Each team must present its main lines of argument (its “case”) and the principal evidence supporting the
case in the course of its two constructive speeches, which are prepared from a topic announced previously. The members of each team may divide between them the labour of presenting the case in any way they see fit. Any constructive speech (except the first affirmative) may also include explicit attacks upon the case of the opposing team and explicit replies to attacks made by their opponents.

8- Cross-Examination
The purpose of cross-examination is to allow each team the opportunity to elicit damaging admissions
from its opponents regarding their case. The admissions may then be used against them in subsequent
speeches.
Each speaker seeks to elicit these admissions by asking questions of the opposing speaker whom he/she is assigned to cross-examine. The respondent is required to respond to these questions in some way. Both questioner and respondent should avoid speech-making. Questions may be based on statements made earlier in the debate, on arguments, which the questioner expects his/her partner to present, or on any topic, which the questioner thinks, may bring his/her side advantage, regardless of its apparent relevance to the debate. Questions, however, may NOT be personal (e.g., “Do you do drugs?)
The questioner may not demand simple “yes/no” answers. The subject has the right to explain any answer briefly, but is forbidden to stall or filibuster. If the respondent is answering at inordinate length, the questioner may interrupt (as courteously as possible) in order to continue the line of questioning.

9- rebuttal
The purpose of rebuttal speeches is to give both teams the opportunity to summarize their case, defend
them from attacks by opponents, and press attacks upon their opponents.
New lines of argument may not be introduced in rebuttals. Exception: in the first affirmative rebuttal,
which follows two negative speeches, the speaker may deal with new issues raised in either of these
negative speeches, even if this requires a new line of argument.
In general, the introduction of substantial items of new evidence should be avoided in rebuttals.

10- Evidence
Both teams are expected to support the lines of argument with sufficient evidence to make them logically
persuasive.
Evidence may consist of facts, statistics and/or authoritative opinions drawn from published or publicly
accessible sources (NOT private conversations, personal letters, or similar sources.) Debaters may assert
that some facts are “general knowledge,” but judges must decide for themselves what value, if any, to
attribute to such assertions.
Debaters should always be prepared to document the source of any evidence. It is customary, but not
mandatory, to cite the source of most evidence when it is introduced in a speech.
Evidence may never be fabricated or deliberately misrepresented. A debater who is shown to have done so may be disqualified from further competition.

11- Definitions
It is the duty and privilege of the affirmative team to make clear at the beginning of the debate as precisely as possible how it construes the resolution. This may be done by defining each key term individually, by paraphrasing the resolution as a whole, and/or by presenting the plan, which the affirmative proposes to implement the resolution.
In prepared cross-examination debates, definitions should embody the standard meanings of the terms of the resolution in contemporary public discourse. Creative, novel, or whimsical definitions are not
appropriate. The affirmative must construe the resolution in such a way as to make it debatable. They may not construe it as a tautology or a truism.
The negative may challenge the definitions offered by the affirmative only at the beginning of the first
negative speech and only on the grounds that the definition does not meet the requirements set out in the previous rule. The judges must decide at the end of the debate whether such a challenge is warranted.

Meanwhile the negative may either attempt under protest to make its case under the definitions
offered by the affirmative, or make its case under the challenged and revised definitions. However, a
prolonged wrangle over definitions is not advisable, as it leads to avoiding the intent of the debate. The
negative is better advised to challenge, if need be, but to proceed with an attempt to argue under the
original definitions. The affirmative should make every effort to define in a manner that will be acceptable
by both sides.
A non-challenge by the negative in the first negative speech is deemed explicit acceptance of the
affirmative’s definitions.

12- Other Duties and Privileges of the Affirmative and Negative
Affirmative– The affirmative has the burden of proof and the compensating privileges of presenting the
opening and closing speeches. The affirmative is not required to offer a plan, but, since it is required to
show that the resolution is feasible and does not entail significant disadvantages, the affirmative usually
chooses to offer a plan – a reasonably detailed description of the way in which the resolution should be
implemented – as the most efficient and persuasive way to accomplish these tasks.
Negative– The negative enjoys the benefit of presumption. Therefore, debates in which the speaker scores
produce a tie are awarded to the negative. Strictly speaking, the negative is not required to “make a case”
in order to win, but may confine itself merely to attacks upon the affirmative case. In theory, the negative
wins if it mounts a completely successful attack on one major element of the affirmative case. In practice,
completely successful attacks are extremely rare. The negative may introduce a counter plan, an
alternative proposal. A counter plan must solve the same problem, attain the same goals, or bring about
the same advantages as the affirmative claims will be done by its solution, but by means entirely different
from those stated or implied in the resolution. If a counter plan is introduced, it MUST be in the first
negative speech. If the negative introduces a counter plan, it assumes the burden of proof comparable to
that borne by the affirmative.

13- Speaking times
Constructive Speeches. 6 minutes each. Each constructive speaker is granted a 30 second grace period to
finish his/her speech after the allotted time has expired. Judges will disregard anything said after the
expiration of the grace period.

14- Cross-examinations– 3 minutes each. The cross-examiner must stop speaking as soon as the time
expires. If a question has been asked, but the time allotted expires before the respondent is able to answer it, or to complete an answer, the respondent may choose whether to answer it. If an answer is attempted, it may continue briefly beyond the time.

15- Rebuttals– 3 minutes each. These speeches must end when times expires. There is no grace period.
Judges will disregard anything said after time expires.

18- Other matters –
Speeches in cross-examination debates may not be interrupted. There are no points of order, personal
privilege, or information. Heckling is prohibited. Courtesy is expected.
Violations of rules, misquotations of opponents, and similar matters may be called to the judges’ attention in constructive or rebuttal speeches, and occasionally in cross-examination. Judges will rule on these matters at the end of the debate and should consider them as they decide the outcome of the debate. The chairperson has no role in such rulings.
If there is no chairperson, a judge will begin the debate by recognizing the 1st Affirmative speaker.
Thereafter, debaters should speak in turn without formal recognition.
The team with the highest total number of speaker points must always be the team which wins the debate. If the two teams’ total speaker points are tied, the negative team must win the debate.

19- Evidence
Quotes – Whenever a debater quotes at any length the words of another, the fact the evidence is quoted
material and the source of the quote must be plainly stated.
Availability of Materials – Speakers may use notes if they wish. If charts, maps, books, or other materials
are used by any debater, they shall be left before the audience and shall be available for use by the
opposing debaters in refutation. Debaters may use laptop computers.