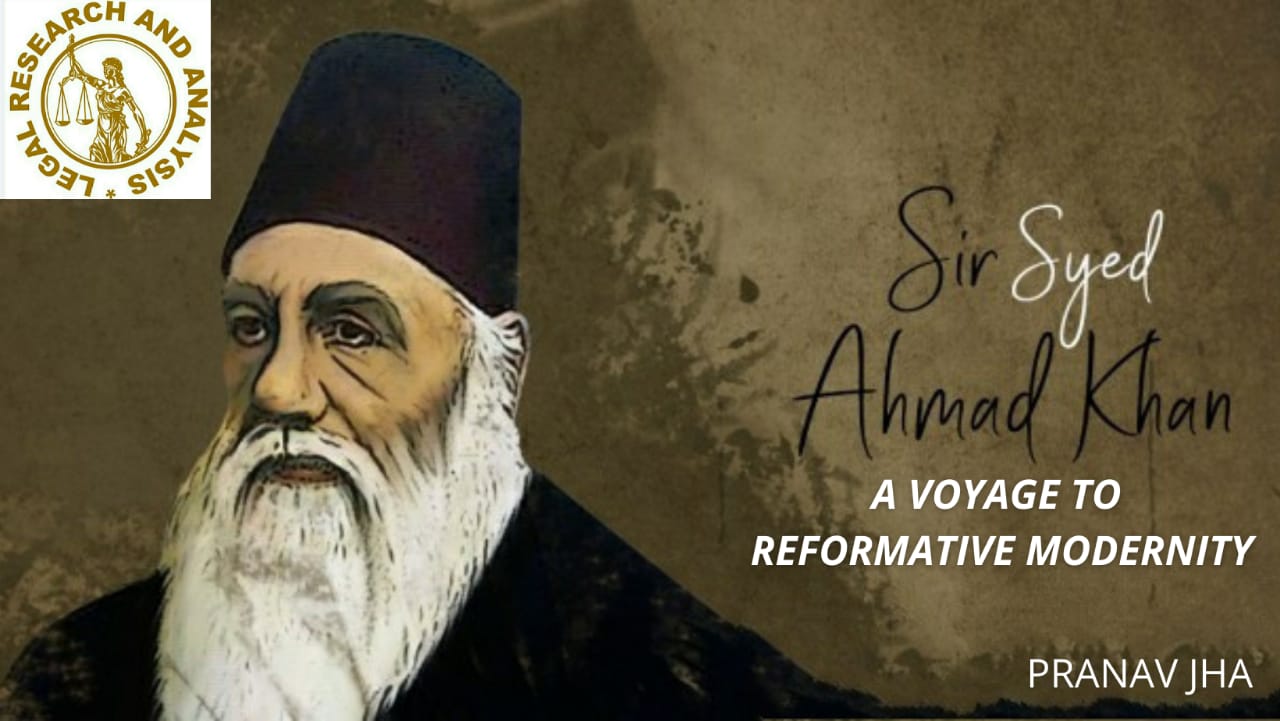 Sir Syed Ahmed Khan, a name that needs no introduction. We all shall comply with the fact that he was a multifaceted, encyclopedic, inspirational, and philanthropic personality. Moreover, he was an Islamic reformer, pragmatist, philosopher, and jurist.      However, he was jumbled into controversy from within the orthodox community as well as outside. This was because he was a man who believed that Islam can easily adopt science. He always believed – “Muslim youth should carry Quran in one hand and Science in another’. He attacked outdated customs and traditions through his journals like ‘Tehzibul Akhlaq’.

He was from the aristocratic class. When it was a time when Mughal Empire was losing and British Empire was a new emerging force. It was a period of stagnation for Muslims and on that note, Sir felt that education was the most important tool to be concentrated upon because it develops the capability of rational thinking.  Though Sir S.A. Khan has been widely criticized as the originator of Two Nation Theory, we have to appreciate that he was such a leader who was the need of the Muslim community. And even at present, we can witness the relevance of his preaching throughout the community. He believed that through educational empowerment only things can considerably change.  He had always shown the right path towards enlightenment.

Turning from a secular face to a communal face was always the game of these politicians and people like Sir Khan became scapegoats. One must be clear on this note that- it’s always the choice of an elite class. Leaders make politics out of it. Masses don’t understand the real picture going behind the scene.

A BRIEF NOTE OF HIS LIFE-CYCLE

Sir Syed Ahmed Khan is an eminent personality who has blessed us with lots of his contributions. We have witnessed a plethora of incidences which makes us realize that if he won’t be there within us then lots of positive changes be a delusion. He has been a government servant, an aristocrat an Islamic scholar, a journalist, an educationalist; he has left behind a vast canon of books and magazine and newspaper articles. Moreover, he was also a historian and archaeologist who could write with verve on the historical monuments of Delhi. His examination of the reasons for the revolt of 1857, a challenging demonstration with regards to now is the right time, is still cited by antiquarians as a standout amongst other investigations of the occasion. He was deeply devoted to the cause of education and believed that widespread education was the only way to enlighten the masses and accordingly we have witnessed how with this vision how he has successfully made a drastic change, although he has faced various hardships to come into effect

As we know that his supreme interest in Syed’s life was education – in its widest sense Sir Syed wanted to create a scientific temperament having all sorts of logical interpretations among the Muslims of India and to make the western knowledge of science readily available to them. He catalyzed modern education at a time when all the Indians in general and Indian Muslims, in particular, considered it a sin to get modern education and that too through the English language, so this was one of the sound steps.

There are lots of things that boosted his contestations, such as through Aligarh Institute Gazette, Sir Syed succeeded in transforming the traditional Muslim Society. Some of the traditionalists and orthodox Muslims prejudiced him to the extent that they named him. Mulhid (Atheist), Kafir. Anyone other than Sir Syed, having a poor level of commitment would have backed off in the face of strong opposition but he responded by bringing out another journal Tehzibul Akhlaq’ which greatly set an epitome in infusing a new curiosity amongst Muslims for acquiring modern knowledge. It also paved a new path to Muslim social and political thought. Along with his research for a measure to the community’s backwardness, he kept on writing for various causes of Islam without prejudices against any religion.

Sir Syed Ahmed Khan sacrificed his whole life for the cause of society at large. He was an educationist with a sense of mission, a writer-thinker with a visionary approach, and moreover a great social reformer with a sense of responsibility. Sir Syed Ahmad Khan, while explaining the reason behind the establishment of Mohammedan Anglo-Oriental College which later on became Aligarh Muslim University, once said “Suppose, for example, there are two brothers, one of whom is quite hale and hearty but the other is diseased. Thus it is the duty of all the brothers to take care of their ailing brother. This was the very idea that goaded me to establish the Mohammedan Anglo-Oriental College. But I am pleased to say that both the brothers get the same education in this College.

Sir Syed categorically stated the purpose behind the establishment of the MAO College which was to reform and promote the ailing Muslim community, one of the brothers of the Hindu-Muslim brotherhood. He was an ardent supporter of Hindu-Muslim unity and through his writings always advocated for strengthening and promoting the composite culture of India 1.c. Ganga Jamuni tehzeeb. This remarkable belief of his becomes more evident in his observation- “India is like a bride with two beautiful and lustrous eves: Hindus and Muslims and they quarrel with each other, that beautiful bride will become ugly. “Another keynote saluting aspect of Sir Syed’s personality was that he was in government service but did not deter in pointing out flaws in government policies.

The facet of Sir Syed Ahmed Khan that continues to inspire today was his endurance to attain the goals lector the upliftment of humanity despite resistance obstruction from society at large. His faith in Almighty was unshakable. A brave fighter, an enlightened age great social reformer. Sir Syed Ahmad Khan belongs to those who are on the verge of extinction in today’s society. We at present focus more on Words than work but he was a personality of action and always matched to his words. He devoted his life and was oriented towards establishing an institution with par excellence to Harvard and Cambridge after going through the Indian educational past. He inculcated the spirit of distinct traditions which was the amalgamation of traditional and modern temperament in both senses

Sir Syed Ahmed Khan, the name in itself emphasizes different facets of modernism when talked in the Indian context, in context with women empowerment upliftment of women: gender equality: or the impact of western education. He has covered all the ambit of Modernisation through his thoughts published in Various journal, articles, and most importantly his works for education through Aligarh Movement, consequently initiating an institution for dispensing modernity in the name of Madrasatul Uloom Musalmanan-c-hind also known as Muhammadan Anglo-Oriental College in the year 1875. Later on, this particular institution was named Aligarh Muslim University in the year 1920.

Sir Syed’s vision based on logic, pragmatism can be understood by one of the slogan of the very famous journal. Aligarh Institute Gazette whereby it was mentioned. “To permit the liberty of the Press is the part of wise Government; to preserve it is the part of a free people.” By this slogan, we not only understand that Sir Syed was a man of reason but also it can be logically deduced that Sir Syed was labourer if pragmatism. and free thinking which leads to Modernism. The central theme of modernism at that time was not an easy meat to swallow for the Indian of scientific Society in general and Muslims in particular, It was education especially in the light of English language To fight crisis like these was itself a reflection of Sir Syed’s vision of modernity. Such was his ideas, especially at the time of leadership crisis and turmoil among the Indian Muslims and the people in general was a boon for us. It was a man of his stature who championed the cause of modernism.

To Sir Syed Ahmad Khan, the concept of modernity was quite distinctive for the Indian Muslims as he considered the thought-process of westerners to be the central theme of modernism and that must be spread awareness within the Indian Muslims in particular and the masses in general. It means to Sir Syed the definition of modernism was about introducing the necessities to Indian Muslims which were required by them vehemently and necessarily. Forked about education and education! That was the only mistake he committed that was the only thing he propounded in cultivating the minds of Indians his whole life, just to youth in the light of western and Islam.

Sir Syed’s most prominent Aligarh Movement is the endeavor. He established in Moradabad in 1859 and Ghazipur in 1863. He also founded the scientific society in 1864. At the pain in Syed was posted al Aligarh in 1857. He has the Muhammadan Anglo-Oriental School in the city and his visit to England in 1869, he examined the British instructive framework und valued it Sir Syed needed MAO College to about as an extension between the old and the new frameworks. A genuine Muslim is one who must have the sacred Quran in one hand and the science in the other Today we can see the Aligarh Muslim University offering distinctive courses like Medical, Engineering, Science, Arts Management, Languages and so on.

Sir Syed’s point not simply to build up a school at Aligarh but rather he was occupied with spreading training and strengthening among the general population by setting instructive foundations in each alcove and corner of the nation He, therefore started in an organization called “All India Muslim Educational Conference to achieve this goal. It motivated the Muslims to open a number of educational institutions in India. Sir Syed additionally drew out a diary Tehzihul Akhlaq’ and prevailing with regards to imbuing another craving among Muslims for gaining current learning. Sir Syed at long last came to the end that absence of training was the fundamental driver of the backwardness of the network. It is intended for all Muslims and in addition non-Muslim understudies. All live and contemplate here in a benevolent and quiet air. It has got a rich cultural heritage, which is special and inimitable.

Sir Syed finally came to a point that lack of education was the main cause of the backwardness of the community at large. The fundamental question which becomes relevant today is that whether the present day generation trying to learn and assimilate with those golden teachings of Sir Syed, the answer is obviously a “No.” We muse thrive hard to propagate the feeling of brotherhood and education in the society so we bring the least of what was cherished by Sir Syed Ahmad Khan and which is evident from his saying. “Do not show the face of Islam to others instead show your face as the follower of true Islam representing character, knowledge, tolerance and piety.

Ultimately Sir Syed became successful in his mission and gave a firm foundation to Aligarh College (Mohammedan Anglo-Oriental College) which further became Aligarh Muslim University and it is widespread into 4 areas- Aligarh, Murshidabad, Malappuram, and Kishanganj. The establishment of the AMU, Aligarh in 1920 from madrasa took lots of hardships, which has now become one of the top Universities of the World. Ministry of Human Resource Development released NIRF (National Institutional Ranking Framework), 2018 and AMU ranked 10th in the Universities category.

Gradually, other Off-Centres have also come up-to the mark and are reaching at its zenith. As far as upliftment of this Centre is concerned, it is on its right track to pave the way to success. Every University/ Institution has its significance in its own way and they want it to be preserved. Similarly AMU has its uniqueness in form of Aligarh Tehzeeb and wherever an “Alig” goes he reflects the beauty of his character.