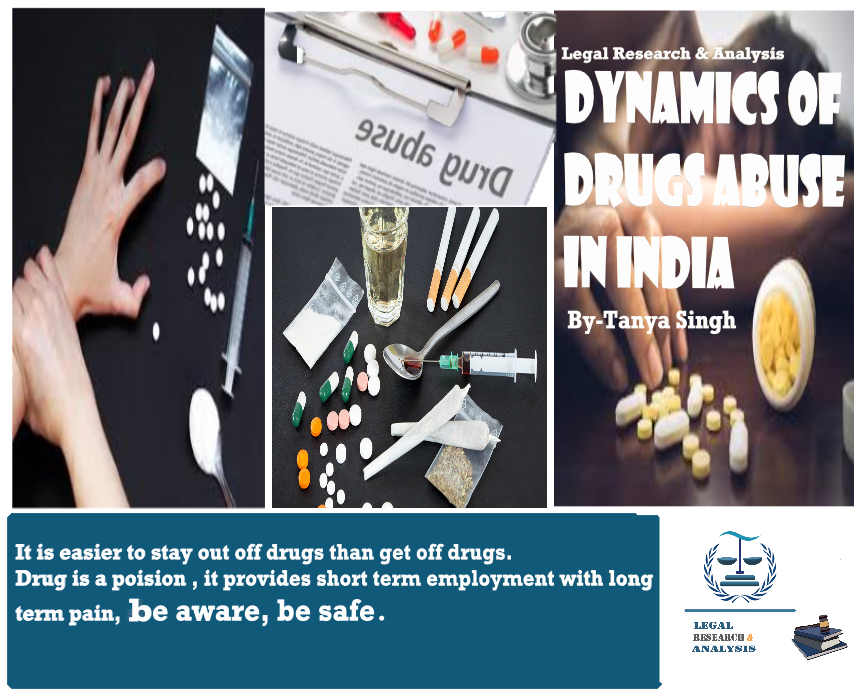 Dynamic of Drug abuse  in India

The pattern of drug abuse in India has undergone changes over the years. Use of drugs like Charas, Ganja and Opium was a tradition in some places of India, where people mainly used for ritualistic purposes. However, the consumption of hard drugs like heroin and LSD is a relatively new phenomenon. Injection drug use has also been affecting people, which cut across socioeconomic strata .Drug addiction causes immense human distress and the illegal production and distribution of drugs have spawned crime and violence worldwide.

Today, there is no part in the world which is free from the curse of drug trafficking and drug addiction. Millions of drug addicts all over the world are leading with miserable lives. The majority of the drug abusers was attaining the age of 15 years, which is considered the most viable age for experimenting and adventure seeking primarily under the influence of peers, friends or media, etc. Ganja, the most widely used drug in India, has been the first ever-abused drug for most of drug abusers. However, the interface between abuse of soft substances and hardcore drugs confirms the hypothesis that drug dependency is not an abrupt process.

Drug abuse is when you use a legal or illegal substances or when people take it more than the regular dose of pills or without doctor prescription. Drug abuse is used to feel good, reduce stress and to avoid reality, but usually it makes people unhealthy and unstable.

Addiction is when you can’t stop, even when your life is in danger, or when it causes financial, emotional, and other problems for you or your loved ones.

India is in the highest scale of drug abuse, and the numbers are also increasing day by day. It is estimated that about 9 lakhs Indians inject drugs in which 5 lakhs are children and 1.8million adults need help for inhalant dependence and 7.7 million Indians require help for opioid dependence, and the usage of opioid in India is three times the global average, as per the 2019 All India Institute of Medical Sciences study.

Cannabis products includes charas, bhang, or ganja, are abused throughout the country because it has attained some amount of religious sanctity. The International Narcotics Control Board in its 2002 report released in Vienna stated that ”in India persons addicted to opiates are shifting their drug of choice from opium to heroin”. Pharmaceutical products containing narcotic drugs are also a drug abused. The intravenous injections of analgesics are also reported from many states, as it is easily available at 1/10th the cost of heroin.

Why Some Become Addicted?

There are 3 reasons for becoming someone drug addicted:

Impact of drug abuse on Society and Women in India

The following are important elements which helps kids  from resisting it and preventing them from the drugs and alcohol:

Legal Bodies and Laws of Government that enforces Drugs regulations

The legal bodies governing the drug abuse in the society are:

In India the drugs abuse was not properly governed, but after 1985, legislature passed Narcotic Drugs and Psychotropic Substances Act, (NDPS Act) in 1985. The act was enacted to win the battle against the Drug trafficking, for this act criminalized the cultivation, trade, import, export and any kind of local consumption of narcotic drugs and psychotropic substances. The Act was amended thrice in the year of 1989, 2001 and 2014, and made the punishment much stiffer than before. According to this Act any kind of offence relating to the drug is taken as the serious issue and is considered cognizable with non-bailable offence.

1. A national action plan on substance abuse is required by the state.

2. There is a need of counseling and rehabilitation to child affected by drug abuse.

3. There is need of communication between parents and child

4. There should be a co-ordination between the multiple bodies which are established to fight with drug abuse.

5. by making awareness among people about drug abuse.

6. There is a need of proper control over the manufacture, distribution and import and export of chemicals which are or can be used in the illicit manner.

India today is suffering with so many health issues which includes mental and physical health, this is due to the youth wearing the blanket of drugs. There are so many steps taken by the government and the active people of the country to promote and positively aid the consequences of the drug abuse such as, in Cinema halls before the movie starts a small social video is played, also in YouTube, even many channels are working towards resolution of this serious issue by making social experimental videos so to spread the awareness in the society.

“Drug is a poison; it provides short term enjoyment with long term pain. So be aware, be safe”